The opening round of the Blancpain GT World Challenge Europe season, which also kicks off a new era for what was formerly the Blancpain GT Series Sprint Cup, had an amazing start with qualifying in intermittent rain ensuring jumbled grids.

This was particularly the case for race two's starting order which was set in the second session.

The weather ensured it was in effect a one-lap shootout wherein only some of the runners could get a lap in on the dry track at the start of the session before rain fell, and pole went to Silver Cup competitor Schiller. His car will be started by Timur Boguslavskiy in race one, from 14th on the grid.

The session was red-flagged shortly after Schiller's lap, as Audi Club Team WRT's Christopher Mies left the track at Clark Curve and his #2 Audi R8 was then collected by an out of control Sainteloc Racing #24 Audi driven by the returning Stephane Ortelli.

It was doubly bad news for the WRT team, which has secured six successive teams' titles since 2013 and has a dominant record at this track, as Dries Vanthoor in the #1 Audi was one of nine cars that had not set a lap time before the red flag.

When running resumed the track was sodden and the times at the top could not be challenged and 18th place was the best anyone who had not got a lap in prior to the stoppage could hope for.

The 18th place starting slot was taken in the end by Sainteloc Racing's Christopher Haase in his #25 R8. 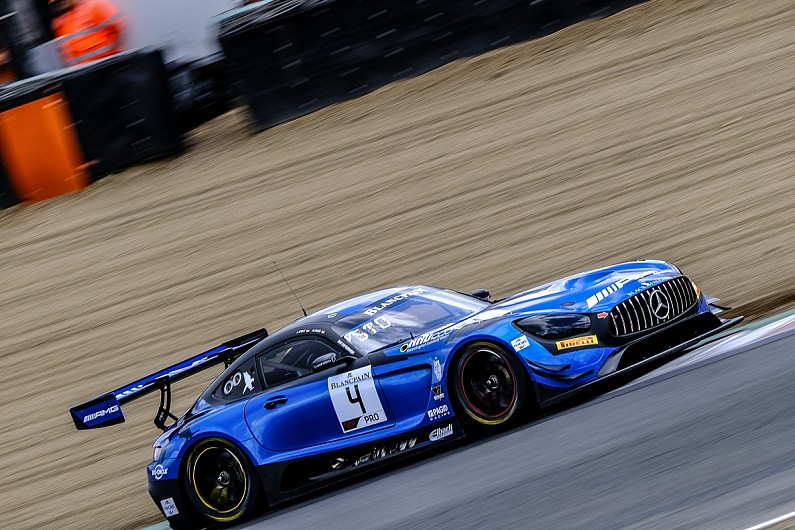 It was run in wet but drying conditions and times tumbled throughout with the person on provisional pole changing repeatedly.

Stolz hit the top with around a minute to go and the session was then ended slightly early when Grasser Racing's Mirko Bortolotti, placed second in the #63 Lamborghini Huracan, crashed at Stirling's.

He ran wide on the corner's exit then spun and had a heavy impact with the barriers on the inside. This put his car out of the second session for his co-driver Christian Engelhart, who'll start race two from the back as a result.

Akka ASP Team's Nico Bastian from the Silver Cup will start race one tomorrow third in his #89 Mercedes.

The race one qualifying session had earlier been interrupted by another red flag, around a third of the way into the 20-minute session.

This was caused by youngster Diego Menchaca rolling his #555 Orange 1 FFF Racing Huracan onto its roof after hitting the barriers backwards at Paddock.

The driver got out of the car apparently unharmed.