DTM champion Rast sealed the victory in the deciding heat of the best of three final at the King Fahad International Stadium, by beating Castroneves in Ariel Atoms.

The decider had looked close but small errors by three-time Indianapolis 500 winner Castroneves tilted it to Rast, who won by 1.5 seconds.

Rast and his double Le Mans 24 Hours winning driving partner Bernhard both were making their first RoC appearance, and claimed a record eighth Nations Cup win for Team Germany - as well as its first without Sebastian Vettel.

Rast had beaten last year's Champion of Champions Montoya in the final's opening heat run in Whelen NASCARs by just under half a second.

Montoya's fellow IndyCar and Penske IMSA driver Castroneves then ensured the best of three final would go to a decider by defeating Bernhard by 1.3s in Vuhl 05 machines. 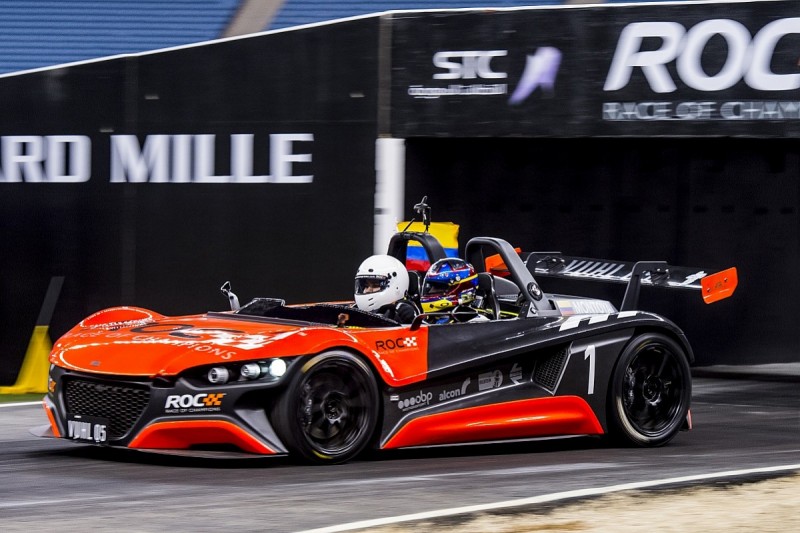 Team Germany had proceeded comfortably past Team Saudi Arabia, represented by Yazeed Al-Rajhi and Ahmed Bin Khanen, in the first semi-final by a 2-0 score.

Team Latin America beat Team Nordic in the second semi-final after a deciding heat, in which Montoya pipped the World Rallycross Championship's Petter Solberg by less than two tenths of a second in RoC buggies.

This was after it had appeared that Team Latin America had been eliminated at the group stage. It was tied on four wins with Team Sweden as the best group runner-up with the fastest heat time used as a tie-breaker for who would proceed to the semi-final.

There was initial confusion as Team Latin America's best time was lost due to a timing problem.

It was announced that Sweden had qualified, before organisers consulted aggregate times and put Latin America through.

Team Germany got to the semi-final by topping Group A ahead of Team Latin America. Bernhard had beat Castroneves in the deciding heat in Whelen NASCARs.

Team Nordic pipped Team Sweden to top Group B after Solberg beat Team Great Britain's David Coulthard in a delayed final heat - Coulthard having had technical problems getting off the line in the first attempt.

This meant Team Nordic topped the group by having the better first heat time.

Team USA, made up of IndyCar champions Ryan Hunter-Reay and Josef Newgarden, was eliminated from Group A with one of its heats remaining. With nothing at stake for him Newgarden then eliminated Team Mexico by beating Memo Rojas in their final heat.

For the first time this year a Simracing All Stars team made up of e-racers took part. Enzo Bonito won a four-way contest earlier in the day to join McLaren sim racer Rudy van Buren in the pairing.

Van Buren beat Team Great Britain's Lando Norris in one heat in the Vuhl 05, then took a second heat against Team Sweden's Joel Eriksson when the recent DTM signing crashed at the first corner.

The e-racer team was eliminated from Group B along with Team Great Britain, both with two heat wins from six.

How the motorsport marketplace is about to change