After outpacing the Dane around the pursuit-style stadium track behind the wheel of a Radical SR3 SRX to win the first heat, the second race was to be held using the 1.1-litre ROC Cars.

But Kristensen's car suffered a problem before the start of the race, dumping fluid onto the circuit, and forced a delay.

Stunt driver Terry Grant was then dispatched to entertain the crowd with a combination of Legend and mobile phone based antics, while Vettel and Kristensen switched to the KTM XBow.

Kristensen clipped the barrier at the start of the race, earning a warning for exceeding track limits, but more importantly losing time and allowing Vettel an easy run to victory.

It was Vettel's first overall victory in the Race Of Champions, having won the Nations Cup team event six times for Germany alongside Michael Schumacher from 2007-2012.

"To be honest, I've tried so many times so today was a surprise," said Vettel.

"We all know with this format you don't get much time in the car so you need to be quick when it matters and find the rhythm .

"I was able to find it today and end up in the the fine. In the first race, I pushed very hard.

"I think Tom had a bit of a problem in the second run in the final, so not entirely straightforward, but very happy and honoured to win."

Andy Priaulx, who united with Plato to win yesterday's Nations Cup, was knocked out by Buncombe in the quarter finals, while Williams F1 driver Felipe Massa fell at the same stage to Coulthard.

Home hero and 2009 world champion Jenson Button was defeated by Massa in the round of 16, the same stage in which Hulkenberg knocked out Red Bull F1 ace Daniel Ricciardo and Romain Grosjean fell to Plato.

Future Lotus F1 race driver Jolyon Palmer was knocked out by Buncombe in the preliminary round, in which DTM champion Pascal Wehrlein also fell. 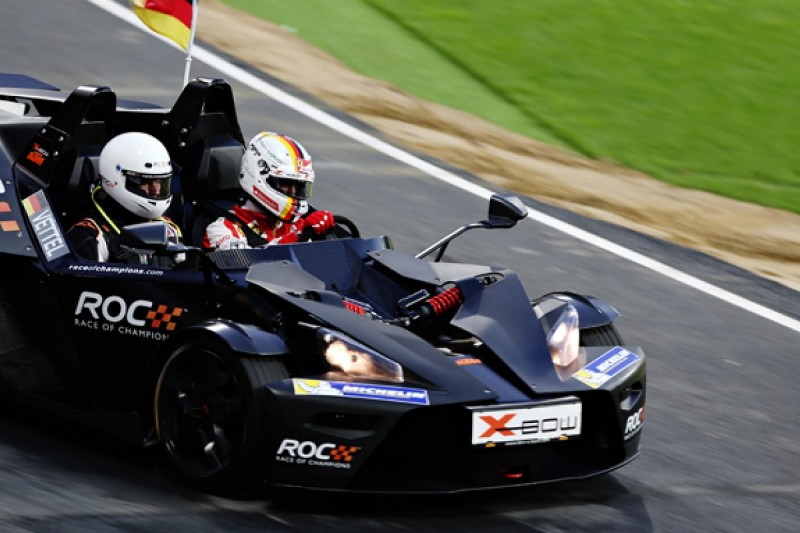