How did Formula 1's 10 teams get on during the Chinese Grand Prix weekend? Find out with our verdict on the full grid 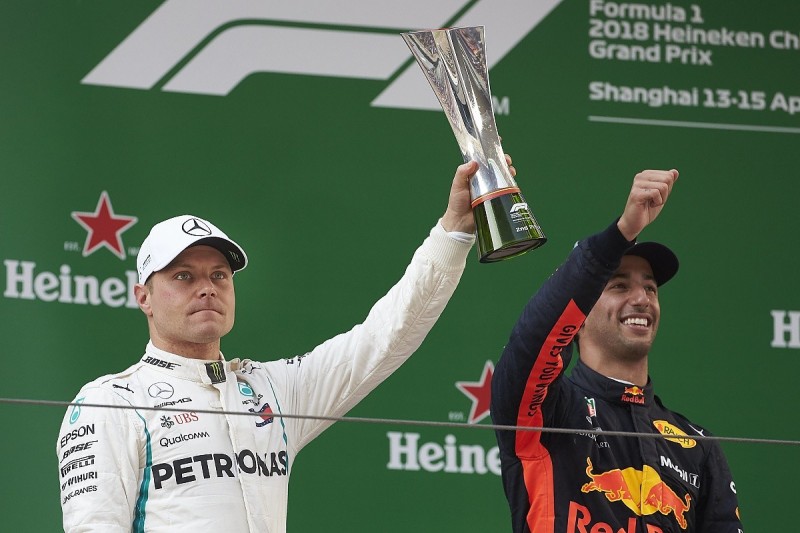 Is the 2018 Mercedes a diva after all? Bahrain was too hot for its tyres on a qualifying lap; China was too cold. It was half a second off Ferrari; something Lewis Hamilton admitted was "very strange".

But as in Bahrain Mercedes came on strong in the race and it looked like a classic 'undercut' pit strategy with a scintillating Valtteri Bottas out-lap would net the Silver Arrows' first win of the season. But the team undid its good work by not pitting Lewis Hamilton under the safety car, and not having new soft tyres to bolt on in any case. Bottas didn't have that option as he was already past the pit entry, and he lost out to Daniel Ricciardo for the win.

Not enough to take the victory in the end, but another huge effort from all the Team in the garage! ?#DivenByEachOther ?? #ChineseGP pic.twitter.com/4qvelSdT3u 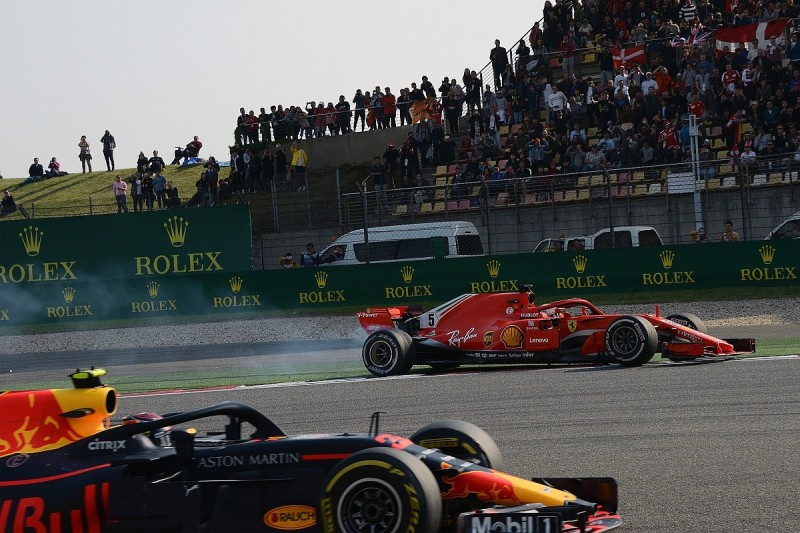 China's qualifying felt like a watershed. Ferrari took its second front row lockout on the bounce and appeared to cement its status as the team to beat across all types of track. Its advantage over Mercedes surprised both teams.

Sebastian Vettel also dominated the opening race stint but then Ferrari's day unravelled. It got some bad luck, not least with Max Verstappen's assault of Vettel, but twice it was lethargic on strategy - allowing Valtteri Bottas to get ahead with an undercut then not pitting Kimi Raikkonen (Vettel was past the pit entry) under the safety car. Its use of Raikkonen as a pawn to hold up Bottas earlier in the race seemed extreme too. 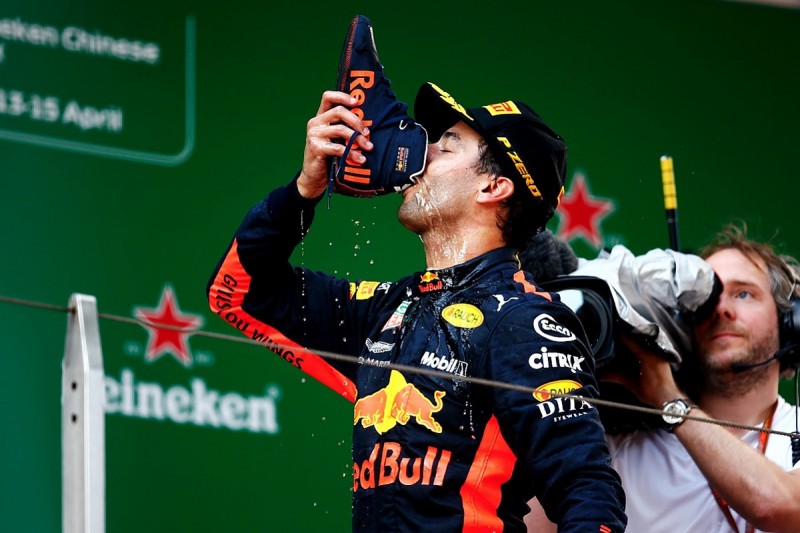 Finally Red Bull was able to show its much-vaunted 2018 race pace, and it demonstrated what else is exceptional about the team - getting Daniel Ricciardo into qualifying in the nick of time after a double quick engine change, being sharp as a tack on race strategy and twice pitting both cars within seconds of each other.

It got a race win for Ricciardo and probably it should have been a one-two but for Max Verstappen's frolics. Red Bull was content with its qualifying pace as well, particularly with the narrow gap to Mercedes, though it again lost out on the straights. 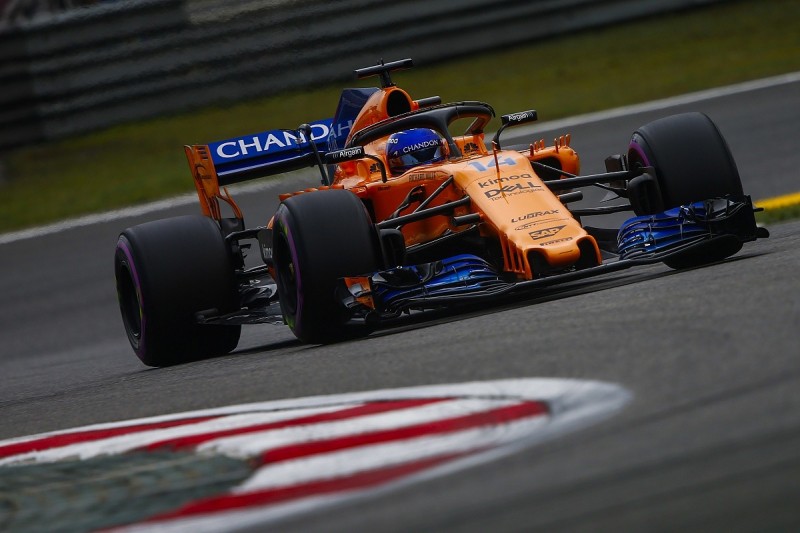 Fernando Alonso suggested McLaren's Bahrain struggle was track specific but in China it replicated its Sakhir qualifying result - 13th and 14th and Alonso's best was eight tenths off that of Nico Hulkenberg's Renault. Focus is shifting to a lack of aero efficiency; boss Eric Boullier admitted the car's targets may have been set too low. Its only crumb of comfort was that it was at least ahead of Honda this time.

Come the race things were a bit better, particularly for Alonso who converted a long first stint to a seventh place finish even though the safety car didn't work for him. 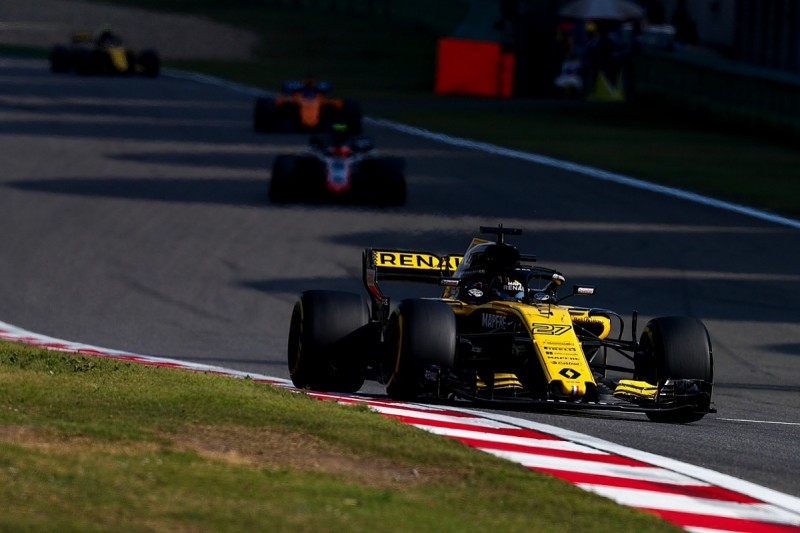 Nico Hulkenberg has been a model of consistency lately, starting seventh in the last six races and this time his qualifying best was just six tenths off the nearest Red Bull. He followed it up with another rapid race and substantial points haul, finishing as best outside of 'the big three' teams in sixth. Team-mate Carlos Sainz backed up him in ninth, not quite pipping Sebastian Vettel, though the pace gap to Hulkenberg remains conspicuous. Renault likely is the team with the clearest claim to best of the rest.

The pace was good today and we were on top of the midfield, so not a bad day overall. Eight points, we'll take that home. It was an entertaining one, that's for sure! ✌?@RenaultSportF1 @F1 #ChineseGP #RSspirit #teamwork pic.twitter.com/4drVnn3Fqp 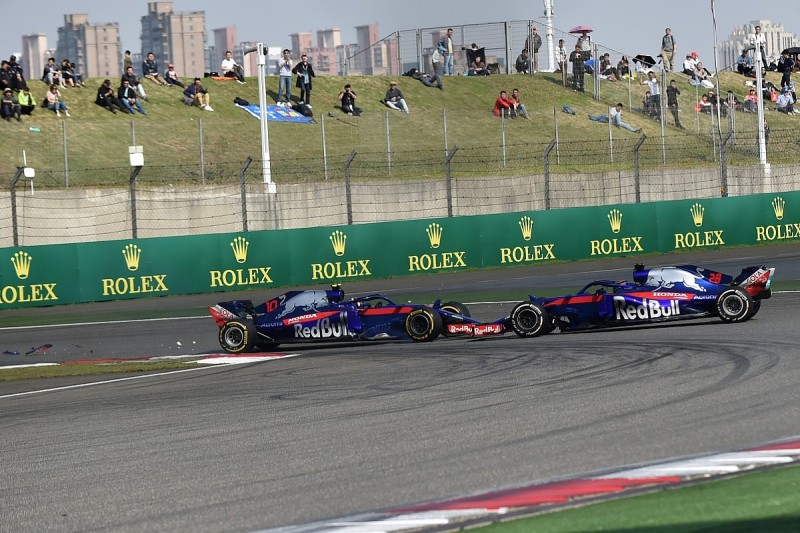 Toro Rosso came back to Earth with a bump in China. Pierre Gasly didn't get out of Q1 and lamented a "massive step back" after his Bahrain tour de force, while Brendon Hartley did little better by qualifying 15th. The pair left little impression on the race either other than by colliding with each other, which Gasly was penalised for. In mitigation it was put down to a "miscommunication" about whether Hartley was going to cede the place.

Difficult weekend, and tough race. Had contact with Brendon, team told us to swap positions in T14 as we were on different strategies, so I expected Brendon to give me room, but he didn't see me. Let's move on. Baku next. ?
Congrats to @danielricciardo for the win, grande!! ? pic.twitter.com/Z6eUubfRpe 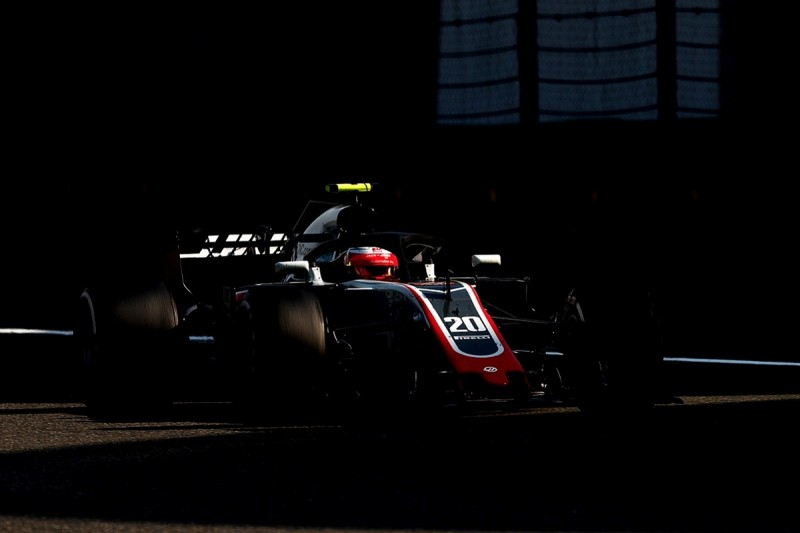 Given how Haas started 2018 this one can be considered a disappointment. Kevin Magnussen missed out on Q3 while Romain Grosjean did little better by starting 10th. Magnussen fought around the head of the midfield in the race but not pitting under the safety car cost him and he sank to finish 10th. Grosjean finished a frustrated 17th after being ordered aside early for Magnussen as well as having to make a late tyre change. Both drivers reckoned the safety car was ill-timed for them.

"We had hoped for a bit more. It's a long season and, hopefully, we'll keep scoring points. I'm proud of how we're performing as a team. We need to keep that up," @KevinMagnussen said post race.#ChineseGP ?: https://t.co/twQ1KgZNww pic.twitter.com/NqIdu7uqIx 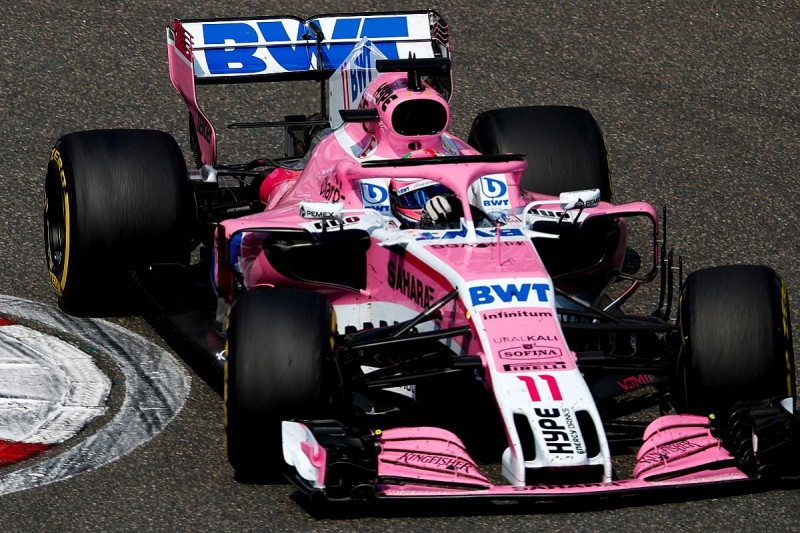 After a tricky start to 2018 with difficult development Force India showed a few signs of returning to its customary form in China. Sergio Perez bagged eighth on the grid, something he called "magic", though Esteban Ocon didn't join him in Q3 and started 12th. The pair's race didn't recover after Perez was pushed wide on the first lap which compromised Ocon too. Neither driver could get into the points and bemoaned that the cards didn't fall their way.

"It was another race ruined on the first lap. The start was chaotic and I ran into a lot of trouble. That pretty much ruined our whole weekend." 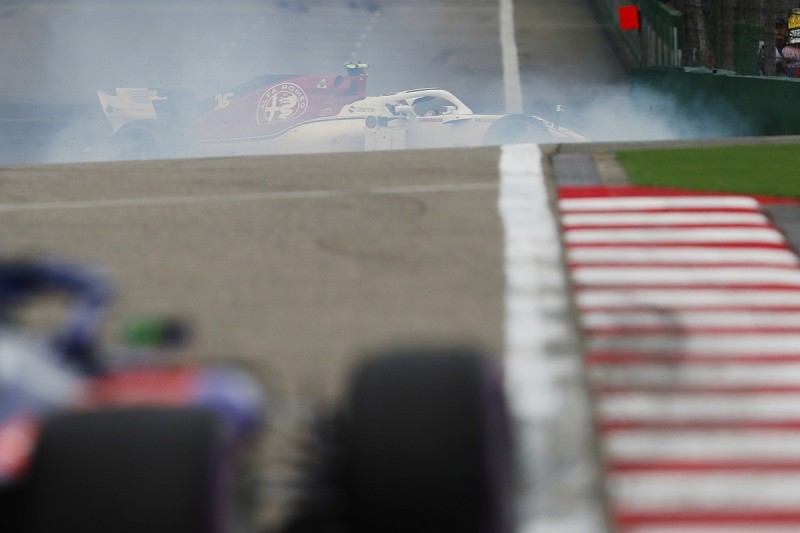 Another team to return abruptly to reality in China. The Saubers filled the back row of the grid after a messy qualifying including Marcus Ericsson getting a (theoretical) grid penalty for not slowing under the yellows caused by team-mate Charles Leclerc spinning. And there was no repeat of Ericsson's Bahrain race strategy triumph as the Saubers finished 16th and 19th with Ericsson ahead. Leclerc again spun and it emerged after the race his car had floor damage.

A good pace on the Soft. Then positive first laps on the Mediums before the spin. Something is not quite right in my opinion as I haven't done anything different in the lap I lost it. Some floor damages have been found that also compromised our end of the race. Next stop : Baku? pic.twitter.com/doxNNeQcD0 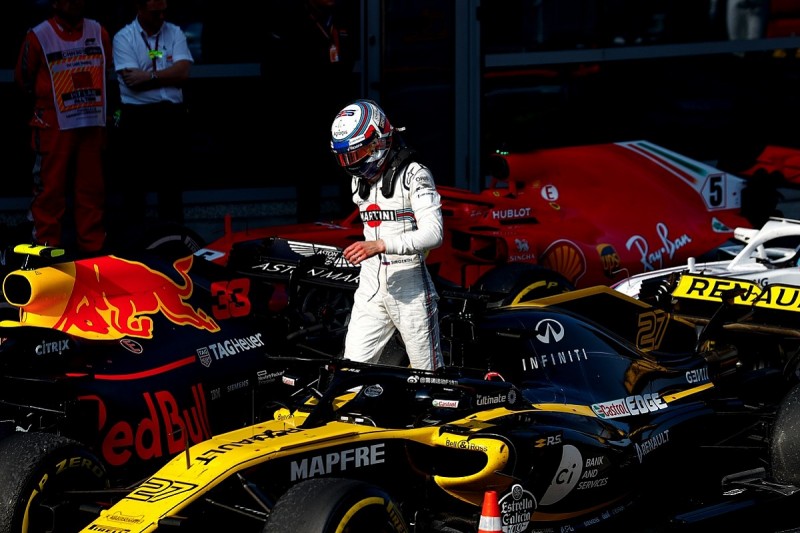 Williams's woe continues - 16th and 18th on the grid, Sergey Sirotkin pipping a Toro Rosso, was meagre improvement on Bahrain. Lance Stroll popping up in 12th place on lap one was about the only highlight. The Williams pair finished 14th and 15th with Stroll ahead, despite splitting strategies. It remains the only team with no points.