From pole, 2013 Indy Lights champion Karam took the lead of the 45-lap race ahead of fellow front-row starter Rosenqvist, and the pair remained uncatchable, only dropping out of the top two positions during the two obligatory pitstops.

Karam took the flag three seconds ahead of the Swede, with Team Penske's Will Power beating teammate and aspiring IndyCar debutant Scott McLaughlin to complete the podium.

Arrow McLaren SP rookie Oliver Askew ran as high as third early on after passing Power on the opening lap, but lost ground to the 2012 series champion and fellow rookie Alex Palou before making contact with Supercars champion McLaughlin at the Bus Stop chicane.

McLaughlin spun and delayed his team-mates Simon Pagenaud and Josef Newgarden, who were forced to pit out of sequence as a result.

Both cars continued, but McLaughlin was delayed by contact with Palou shortly after the Dale Coyne driver's first pitstop, which forced the Spaniard into a repeat visit to the pits. 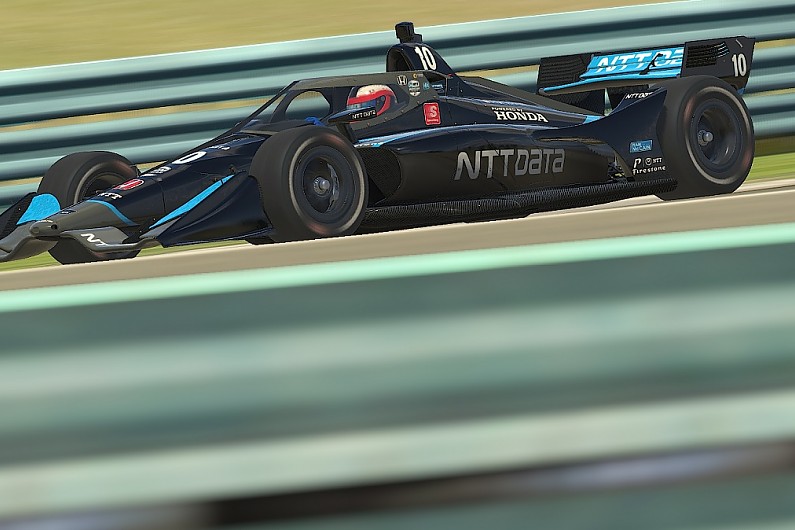 A long first stint for Power helped him to regain third from ex-Formula 1 driver Scott Speed in the Andretti-Herta Autosport entry (subbing for Marco Andretti) and the two cars ran together until moments after the pair lapped NASCAR legend Jimmie Johnson, when Speed spun exiting the Boot.

Following the second round of pitstops, the recovering Penske trio of McLaughlin, Pagenaud and Newgarden all re-entered the top 10, with McLaughlin re-passing Indy Lights champion Askew - this time without contact at the Bus Stop - to claim fourth.

Jimmie Johnson finished 16th on his virtual IndyCar debut, while former team-mates James Hinchcliffe and Robert Wickens both failed to start, Hinchcliffe after being bounced out of the system and Wickens when his steering wheel didn't arrive on time.

Next Saturday's second round will be set at Barber Motorsports Park.