Spa GP2: Sam Bird back in title hunt after victory

The Briton won the feature race for the Russian Time team by seven seconds over Marcus Ericsson.

ART's James Calado grabbed the lead off the line, making a great getaway on his soft-compound slick tyres from third on a slippery circuit.

But Bird pounced on the exit of La Source, retaking the lead and never looking back.

Bird pitted on lap 14 for a second set of prime tyres, and rejoined well clear of a fierce battle for second between DAMS driver Ericsson and Caterham's Alexander Rossi.

Ericsson had slipped to fifth on the opening lap, but took full advantage when Carlin team-mates Jolyon Palmer and Felipe Nasr collided at La Source on lap five.

Palmer spun around the bows of aggressor Nasr, who had pulled off a similar move on Ericsson the lap before, but this one failed dismally and the Brazilian was out on the spot.

Ericsson passed Rossi for fourth at Les Combes on lap seven, and then ran a longer stint than his rivals that paid off handsomely. He jumped Fabio Leimer during the pitstop cycle and picked up another spot when Calado suffered a disastrously slow stop.

Rossi, who also passed Leimer in the pit cycle, caught Ericsson but just could not find a way past him and settled for third.

Leimer pulled a brave move on Calado into Les Combes in the early stages and finished fourth, ahead of a charging Tom Dillmann, who bounced back from a disappointing qualifying.

Julian Leal was sixth, followed by Stephane Richelmi, while Calado recovered to eighth, which means reversed-grid pole for Sunday's race. 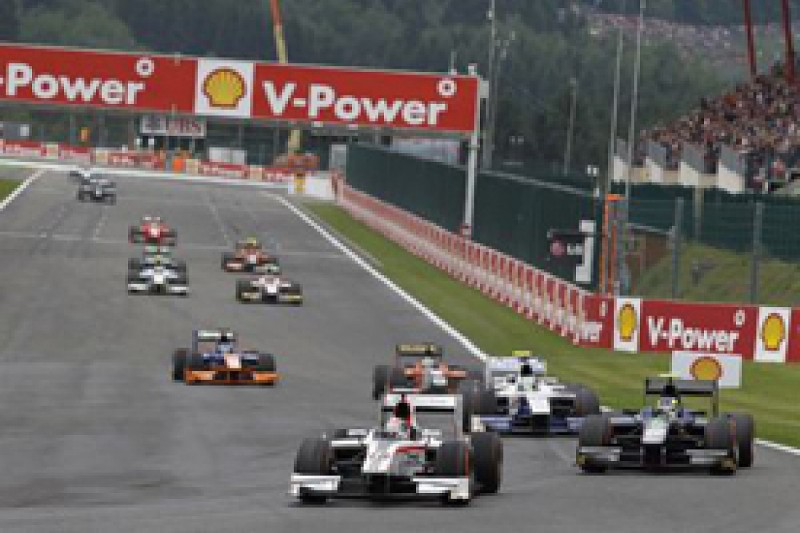 Bird is now 24 points behind series leader Stefano Coletti, who failed to score in 13th.

Coletti was in the mix for points but suffered a scare when Dani Clos drove into the back of him at Raidillon, for which he was penalised.

Leimer has closed to within seven points of Nasr's second place in the title race.

The race was interrupted by a safety car after Rio Haryanto clipped Daniel de Jong at Eau Rouge, the resultant puncture sending de Jong into the wall at high speed. He was unhurt.

Spa GP2: James Calado claims first win of 2013 for himself and ART