Leclerc had led away from pole and pulled a clear gap in the first stint but smoke began to pour from his car on the lap before he made his pitstop.

The problem did not halt him and he came home nearly 10 seconds ahead of Nato, who held at bay Oliver Rowland in third.

At the start, as Leclerc was making a perfect getaway from pole, Rowland could not make the same rapid launch from second and he fell to third as Nato blasted by.

While Leclerc quickly pulled out a huge lead - at times he lapped two seconds faster than his rivals - Rowland stalked Nato in the early stages.

But Rowland began to struggle with severe tyre degradation as it became clear that the soft Pirelli rubber would not last long in the 28-lap race.

Leclerc appeared to suffer no such problems and was 6.2s clear of Nato when the French driver pitted on lap six, followed in by Rowland, Jordan King and Artem Markelov.

But Leclerc's Prema Racing-run car suddenly began to emit plumes of smoke from the rear of its engine cover, which became dirty with oil as he raced around to the pits.

He was able to switch to the hard tyres and rejoin without issue and the problem did not reappear for the rest of the race.

Rowland pressured Nato hard during the early stages of the second stint - attacking at Brooklands and Luffield on lap eight - but he could not find a way by.

Leclerc cruised up behind Alexander Albon, Ralph Boschung and Robert Visoiu, who were all attempting the reverse strategy along with Nobuharu Matsushita, the leader during the middle phase of the race.

But it did not work out for that group and Leclerc came home to take his fifth win of the season by 8.8s ahead of Nato, with Rowland 0.7s further adrift in third. 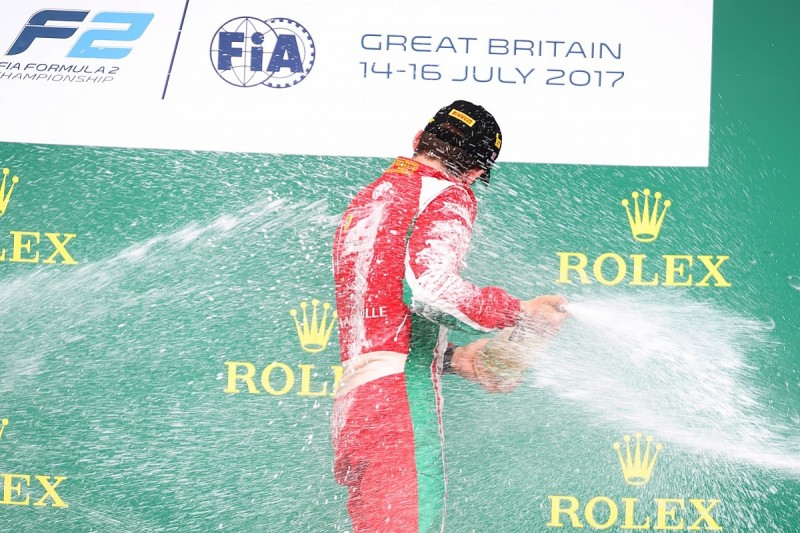 Markelov, who put a bold move on Matsushita down the Wellington straight early on, was fourth for Russian Time ahead of Sergio Canamasas, who scored his best result of 2017 with fifth.

Luca Ghiotto made a series of attacking moves late on to climb to sixth, with King seventh despite putting in a sterling defensive display.

Sean Gelael rose from 18th on the grid to ninth by the flag.

Matsushita rounded out the top 10 for ART Grand Prix, with his team-mate Albon coming home 18th.

Antonio Fuoco finished 16th in the second Prema car and Callum Ilott brought up the rear of the field on his F2 debut.

McLaren F1 junior Nyck de Vries did not take the start after reporting a power problem on the grid, where Albon and Ilott also got stuck, which caused an extra formation lap.