The reigning European Formula 3 champion - fresh from doing demonstration laps at his home Grand Prix at Hockenheim last weekend in his father, Michael's Ferrari F2004 - managed fourth in a wet session at the Hungaroring on Friday.

The 20-year-old was battling at the front of the session for its entirety, blaming traffic for a failure to improve on his last flying lap which allowed Luca Ghiotto to knock him from the top three into fourth, just under a second behind polesitter Nyck de Vries.

"The rainy conditions made things a bit interesting - since it was actually the first time for me going into a wet F2 session," said Schumacher.

"We did a great job in handling it right from the beginning.

"Unfortunately again we had a bit of traffic in our lap but seeing the gap to the front there is for sure a lot of work to be done on my side anyway.

"P4 is a great result but certainly we should focus on tomorrow's performance and on preparing tomorrow's race as best as we can.

"Whatever the conditions will be I am confident we can hope for a good result and obviously try to make the maximum out of this starting position." 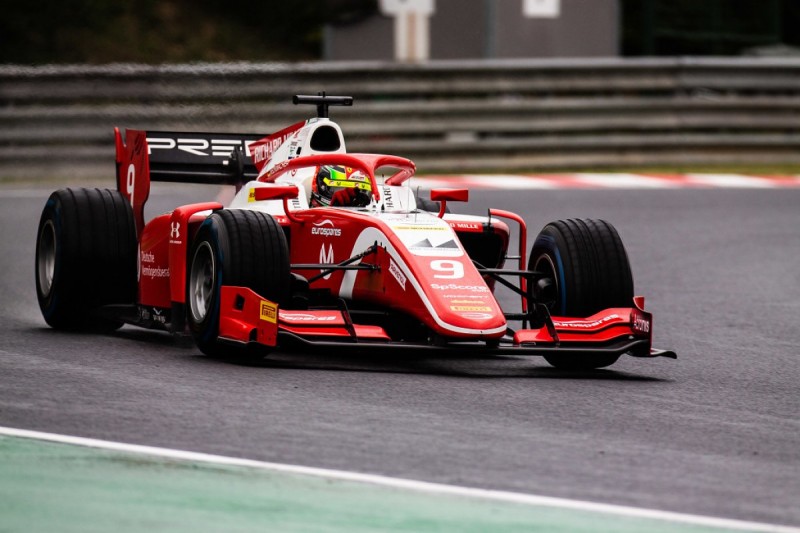 Schumacher qualified fourth in Monaco, but that was in a different format where the times from two separate sessions are married together based on the finishing order in the session, not the best times overall.

He started on pole at the season opening-round in Bahrain, but that was in the reversed-grid second race, not achieved through qualifying.

Saturday morning's Hungaroring race is anticipated to be dry, and Schumacher says he is happy with the form shown in practice in dry conditions earlier on Friday.

"We can be very happy about both P2 in free practice and about our Qualifying," added Schumacher.

"In free practice we found some good points to look at and to work on which was obviously positive, even if, coming into Qualifying, everything changed."

Schumacher's best result in his rookie F2 season is fourth, which came from 18th on the grid in a charge during the Red Bull Ring sprint race two rounds ago.