Charles Leclerc set the fastest time in qualifying for the Monaco Formula 2 round, but faces a post-session stewards' investigation that could cost him pole

Leclerc, a Ferrari Formula 1 junior driver, set the fastest time in the first group of 10 drivers - F2 qualifying in Monaco is split into two sessions of 16-minutes each - to take to the streets of Monaco.

The Prema Racing driver brushed the barriers exiting the tunnel on his way to a best lap of 1m19.309s, which meant he set the quickest time in qualifying for the third time out of three events in 2017.

The fastest driver from group two - ART Grand Prix's Alexander Albon - will start second, and the next fastest drivers from each segment will line up behind Leclerc and Albon in the order they finished their respective sessions.

Nobuharu Matsushita, who crashed at the very end of the first session when he clattered the kerbs going through the second part of the Swimming Pool and hit the barriers on the outside of the track, still earned fifth. 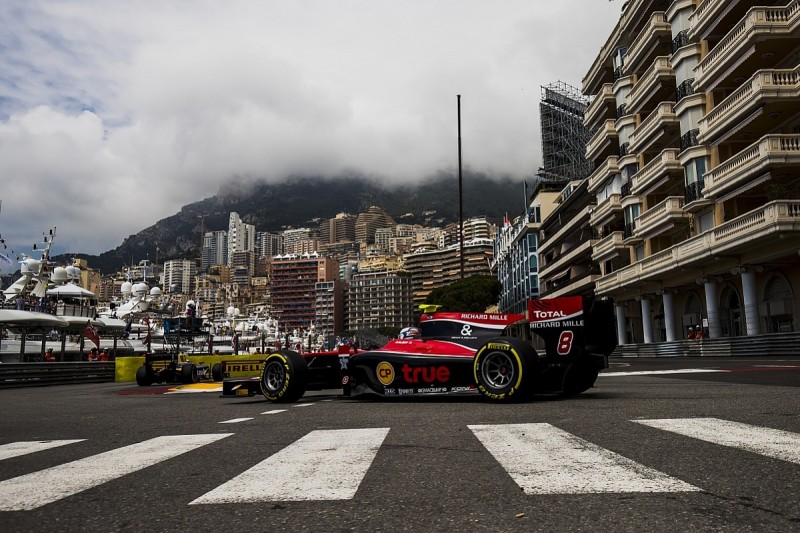 Albon was able to improve his best time to 1m19.321s late on in the second half of qualifying, but wound up just 0.012s slower than Leclerc.

But the Thai driver could yet start on pole as it was announced during the first segment that Leclerc will be investigated for stalling in the pitlane and failing to wait for a minute before getting going again.

Norman Nato will start sixth after finishing third in the second group, and will line up ahead of MP Motorsport driver Jordan King.

McLaren F1 junior Nyck de Vries qualified eighth, but will lose three places for the feature race after picking up a penalty for causing a collision with Prema's Antonio Fuoco in the sprint race last time out at Barcelona.

Luca Ghiotto was fifth in the first session and qualifies ninth, with Nicolas Latifi - who lost what looked like a certain victory in the Spain sprint event when he ran wide after noticing his wing mirror had fallen off late in the race - rounding out the top 10.