De Vries was lightyears ahead in the dry conditions towards the end of the race, while Norris held a similar advantage on the wet track in the early phases.

And there was drama straightaway as recent series dominator George Russell had to forego his fourth place starting spot because of clutch trouble.

Russell started but later retired, meaning the gap between himself and Norris at the top of the standings is just 19 points.

Norris fell back on the first lap from his fifth-place starting spot but began working his way through the field rapidly.

He was anywhere from 1.5-3.5s quicker than his compatriots in the wet, as he passed Jack Aitken and Luca Ghiotto around the outside of Turn 3 respectively, before despatching Nyck de Vries with an incredible lunge at Turn 8.

He was experimenting with different lines and it allowed his wet tyres to find more water, boosting the Brits pace.

It took a lap and a half to catch and pass Carlin team-mate Sergio Sette Camara, who had started on pole.

While Sette Camara battled de Vries and Fuoco for second, Norris drove off into the distance taking a 14s lead into the pits on lap 16 of 34.

But when everybody pitted and got back up to speed, Prema was supreme and de Vries erased Norris' deficit. 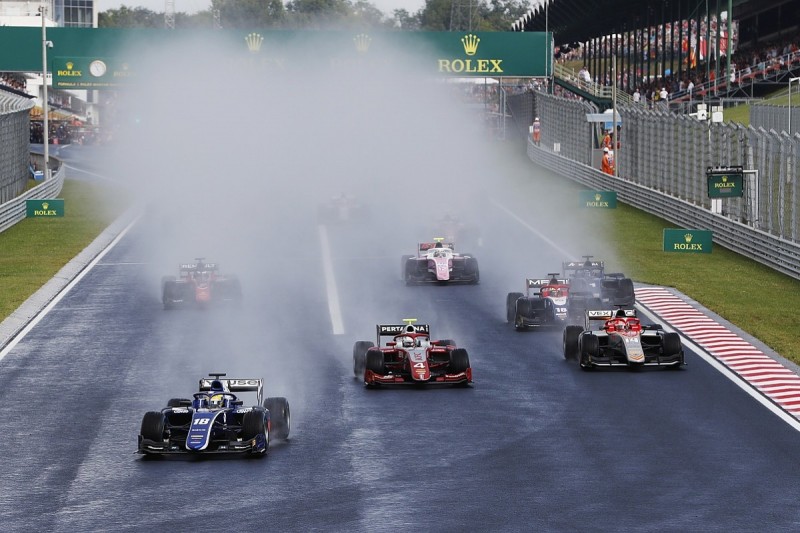 The move was sealed on lap 26 when Norris got a poor exit from the chicane and the Dutchman was through and drove off into the distance.

His team-mate Sean Gelael wasn't far off in terms of lap time, albeit well down the order after a 19th place start to finish 13th.

But Norris wasn't done losing positions, and Sette Camara was with him on the penultimate lap.

Sette Camara dived at Turn 1 for second but ran wide and Norris retook the spot.

The next lap, Sette Camara did the same and ran wide again, but this time Fuoco overtook him, giving him a shot at Norris.

Sette Camara was given an almost instant 10s penalty by the stewards, dropping him to seventh.

Italian driver Fuoco had moved up from 12th on the grid but looked to have thrown his result away by pitting late.

He came under pressure from multiple cars while his tyres came up to speed, but rebounded fantastically to fight for the podium, which he took with Sette Camara's penalty.

Jack Aitken had a poor getaway at the start but was constantly in the top five and was promoted to fourth with the penalty ahead.

Alex Albon started slowly but fought his way back into the top five in what was a brilliant fight for the position in the second half of the top 10.

Luca Ghiotto fell back from his starting spot for sixth, ahead of Sette Camara and Artem Markelov.

Russian Time driver Markelov completed an all important pass on Nirei Fukuzumi late-on, which allows the Russian to take the reversed-grid pole.

Tadasuke Makino also passed his fellow Honda junior Fukuzumi to take ninth ahead of his compatriot.