Aitken has stalled in three of six races this season, as drivers have struggled with the series' 2018 car's tricky clutch, and had a poor start in Saturday's feature race.

But on drying track he leaped ahead of Sergio Sette Camara, as polesitter Artem Markelov struggled and tumbled down the order unable to switch on his tyres.

Aitken built a five-second lead, which turned into 11 seconds after an advantageous Virtual Safety Car occurred after he had completed the straight, and his rivals had to slow.

A safety car for a scary crash between Nirei Fukuzumi and Tadasuke Makino - in which Fukuzumi vaulted over the Russian Time car at Turn 4 - erased Aitken's lead.

After the safety car came in, the only blotch on the ART Grand Prix driver's record for the race occurred as he had ran wide at Turn 5, after that he gathered himself and pulled away, surviving one more VSC before taking victory.

Alexander Albon survived race-long pressure from McLaren F1 junior Lando Norris, the latter hamstrung when a VSC ended and his steering wheel was still telling him he needed to slow, which gave Albon a gap.

Norris closed back in but couldn't pass the DAMS driver.

George Russell struggled with understeer in the first part of the race, but in the second part he lit up the timing screens and caught and passed Luca Ghiotto, to take fourth to go with Saturday's victory.

Ghiotto held on to fifth after struggling to stay with Russell's pace. 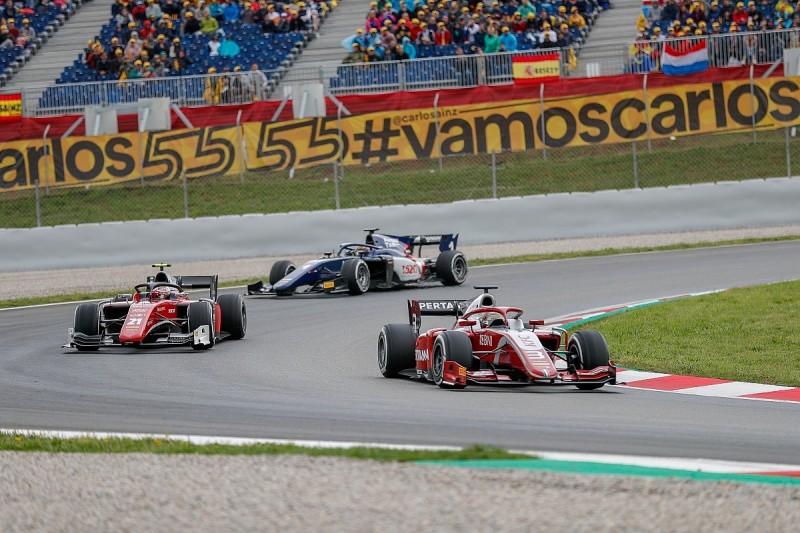 Sean Gelael led the Prema charge after team-mate Nyck de Vries visited the gravel at T5 early on, and then spun out of the race on lap three bringing out the first VSC.

Gelael had been taken out of yesterday's race by Louis Deletraz and started 15th, amplifying the brilliant result.

Antonio Fuoco struggled to move forward in the top 10 for Charouz Racing System and took seventh, ahead of DAMS Nicholas Latifi.

Canadian Latifi worked his way up from 14th on the grid, but had to survive late pressure from a recovering Markelov, who had spent most of the race struggling with his tyres, following expletive after expletive over the radio with the possibility that it could be pressure related problem.

Despite almost punting Latifi forwards at the final turn, Markelov could only take ninth, with Deletraz recovering from the back of the grid to give Charouz two points-scoring finishes.