Trident Racing driver Maini started 19th and could not avoid the stalled DAMS-run car of Racing Point Force India junior Latifi, who had lined up in third position.

Maini hit the rear right of Latifi's car at speed, wrecking both cars and bringing out a safety car, which lasted for six laps.

Both drivers were checked over at the Yas Marina circuit's medical centre, but were released and are cleared to race in Sunday's sprint race if their cars are repaired in time.

"I was a bit blurred, I saw cars going everywhere," Maini told Autosport.

"I tried what I could. All I can say is I think we should thank Dallara for the safe car they built for us."

Maini was particularly disappointed as he felt he could have fought his way well into the top 10 given his strategy.

Luca Ghiotto started 16th but finished third after starting on the soft tyre, and could have taken second if he had not picked up a track-limits penalty of five seconds.

"We were on the same strategy as Ghiotto and I knew we had good pace from quali," said Maini.

"For the amount of disappointments we've had this year I'm used to it. I'm all good - I'm more disappointed than anything." 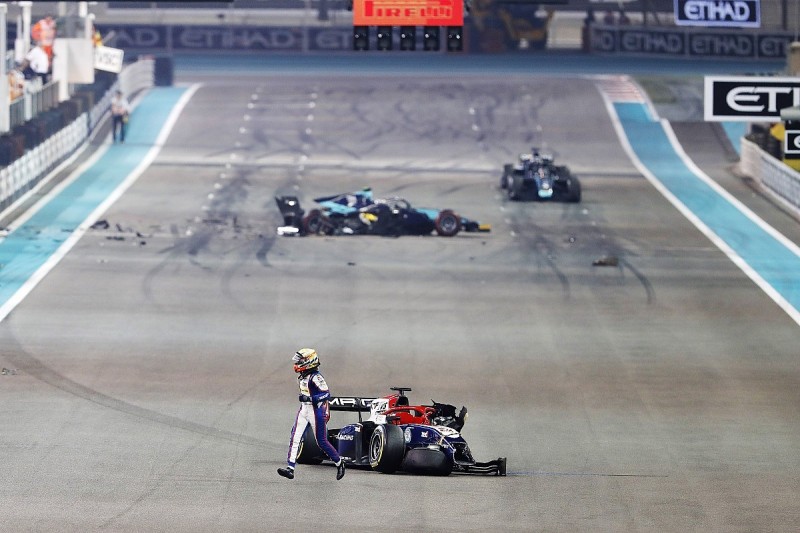 The F2 car has been improved throughout the year as its clutch was tricky to use and not functioning correctly at the start of the season.

The series had to start races behind the safety car at the Red Bull Ring and Silverstone while it worked on changes, and since then it has performed better.

Alex Albon, Latifi's DAMS team-mate, and Sergio Sette Camara (Carlin) both stalled on the grid in Abu Dhabi on Saturday.

Albon was still in contention for the title from eighth on the grid, but the stall effectively ruled him out as he was at the back of the pack.

George Russell went on to win the race and the championship.

Latifi said he wanted to look at the data before he made any comment on the issue.

"We haven't been able to look at the data yet so it's difficult to say exactly what happened," he explained.

"[But] I'm pissed off, especially because of where we were starting.

"I believe despite all the stalls that this is the first crash we've had, so I actually wasn't expecting anyone to hit me.

"Starting at the front you're more at risk. It happened so quickly.

"Maini had it worse than I did, luckily he didn't hit me square on as that could have been worse for both of us."