Leclerc had taken his seventh pole of the season for Prema Racing in a disrupted qualifying session, but scrutineers discovered that his car's differential had been fitted with shims that "did not comply with the material requirements laid out in the Dallara user manual," according to a statement.

As a result, he was in breach of article 9.2 of the FIA's F2 technical rules and will start Saturday's feature race from the rear of the grid.

DAMS driver Oliver Rowland takes over at the head of the pack.

After losing what had been a new F2 record for consecutive poles, Leclerc insisted that the part in question had not given him a pace advantage.

"It's a shim that instead of being in the right material is another material, but I know it doesn't do anything in performance [terms]," Leclerc told Autosport.

"To be honest, I don't really mind, I'm actually quite happy to start last.

"[When I was] younger I always liked to catch up from the back and for tomorrow that's what I have to do.

"Budapest is not the easiest track to do so but I will give my best.

"It's not a disaster, obviously it's disappointing because we lose our seventh straight pole but I think we have shown what we're worth on track.

"The team and I know that there was absolutely no gain in this and I hope we will show that tomorrow with our pace and in the next races after that." 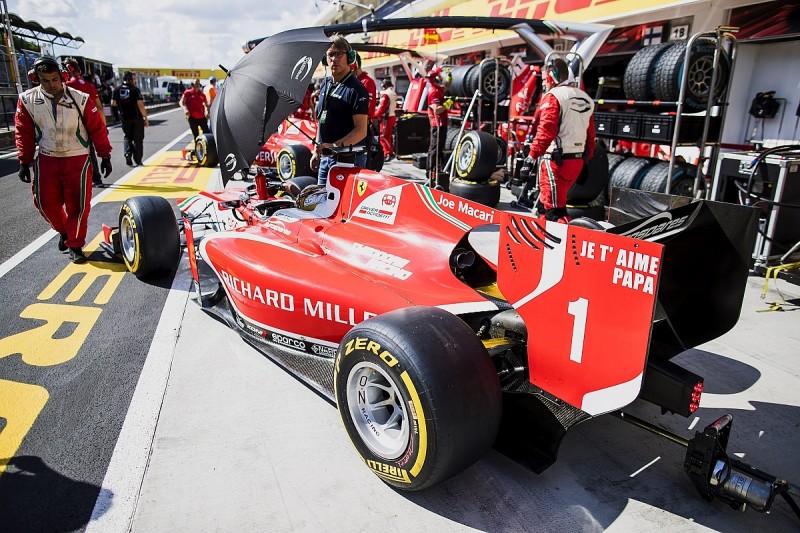 When asked how he felt about losing the consecutive pole record he had only hours earlier described as "amazing", Leclerc was philosophical.

"I really wanted that record of seven straight poles, now we are first equal with Stoffel [Vandoorne], which is still amazing," he said.

"But it's like that, it happens, and we need to move forwards tomorrow.

"It's another day, we will start from far back on a track that is nearly impossible to overtake so it's not going to be easy.

"But it's going to be challenging and I always really liked the challenge [of coming through field]."

It has also been announced that MP Motorsport driver Sergio Sette Camara has been handed a three-place grid penalty for impeding Nicholas Latifi during qualifying.

Sette Camara will now start 18th on the grid, ahead of Leclerc and Arden International driver Sean Geleal, who spun out of qualifying before setting a representative lap time.