At the start, Leclerc defended hard against Ghiotto but held the lead on the run down to the first corner.

Ghiotto dived down the inside of Leclerc at Turn 4 and briefly took the lead but he locked up and slid wide, allowing the Monegasque driver to reclaim first place.

Leclerc then built up a slender 0.9 second advantage over Ghiotto, who lost second to Alexander Albon when the Thai racer dived up the inside at Turn 1 at the start of the fourth lap.

The battle at the front settled down as Leclerc extended his lead up to 2.1s, before he switched to the hard tyres at the end of the seventh tour of the 37-lap race.

Ghiotto followed him in two laps later, which left Albon, DAMS' Oliver Rowland and Rapax driver Nyck De Vries at the front when Sergio Canamasas triggered the virtual safety car when he stopped on track at the approach to Turn 7.

That became a full safety car as the marshals who attended the Trident driver needed to tow his car to safety.

The field had bunched up when the race resumed on lap 14, where Albon and Rowland - who were both yet to stop after starting on the hard rubber - leapt clear.

Leclerc was fighting down in 12th place but began quickly cutting through the field - starting with a sweeping move on Campos driver Ralph Boschung at Turn 1 on lap 17. 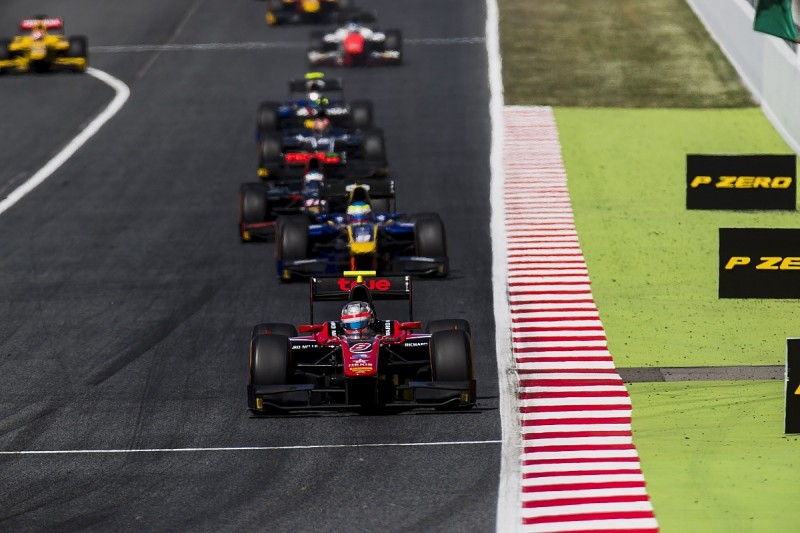 Back at the front, Rowland pressured Albon before moving into the lead on lap 21 after getting better run out of Turn 5.

Rowland quickly established a gap over Albon but was only 13.5s clear of Leclerc - now up to fifth - by the time he finally came into take the soft tyres on lap 28, which dropped him to seventh.

As the final hard-shod runners came into make their stops, Leclerc eased back into the lead and went on to win by 3.7s over Ghiotto - who had shadowed the championship leader after dropping away while they battled back through the pack after the safety car.

Rowland - who at times was two-seconds a lap faster than Leclerc on his new tyres - charged back to third but was a distant 11.1s behind at the flag.

Nobuharu Matsushita finished fourth after mirroring Leclerc and Ghiotto's tyre strategies but was passed by Rowland late on.

Former F1 driver Roberto Merhi was the only driver to fail to finish when he stopped in the pits late on.

The Spaniard had earlier picked up a puncture from Prema's Antonio Fuoco - who also made contact with Markelov and eventually finished in P14.