The DAMS driver had risen from ninth on the grid to finish fourth behind his title rival Charles Leclerc, Nyck de Vries and his team-mate Nicholas Latifi.

But the Briton was given a ten-second time penalty as the stewards deemed he had failed to slow for yellow flags that had been brought out following Nabil Jeffri's crash at Turn 7 midway through the feature race.

"I backed off like six-seven tenths on the data, so more than enough," Rowland told Autosport.

"But the fact that I'd not done a [personal best] sector before that meant that I went green in that sector, which is like a 50-second sector.

"So it's a bit silly, the penalty, and they agreed with me, [plus] in F1 they have mini-sectors."

Three other drivers were given in-race time penalties for failing to slow for yellow flags in an incident-filled event that ended in the pitlane under red flags after Sean Gelael - one of those penalised - crashed heavily at the tight Turn 8 on the run up to the castle section of the circuit, blocking the track.

The other drivers to get a ten-second penalty during the race were MP Motorsport's Sergio Sette Camara and Campos Racing driver Robert Visiou.

"They just said that because they'd penalised the others they had to penalise me as well," said Rowland.

"The ironic thing was that I think Leclerc was three tenths quicker than me in that sector but didn't go green.

"It's absolutely ridiculous and to be fair to the stewards they said 'look we understand it's not really that fair and that at this sort of level we need something a bit better' and they're going to look into that.

"I understand from their side they have to give equal treatment to everybody, so I get that but it's a bit wrong in some ways.

"But that's the way it goes sometimes so I can't really dwell on it too much." 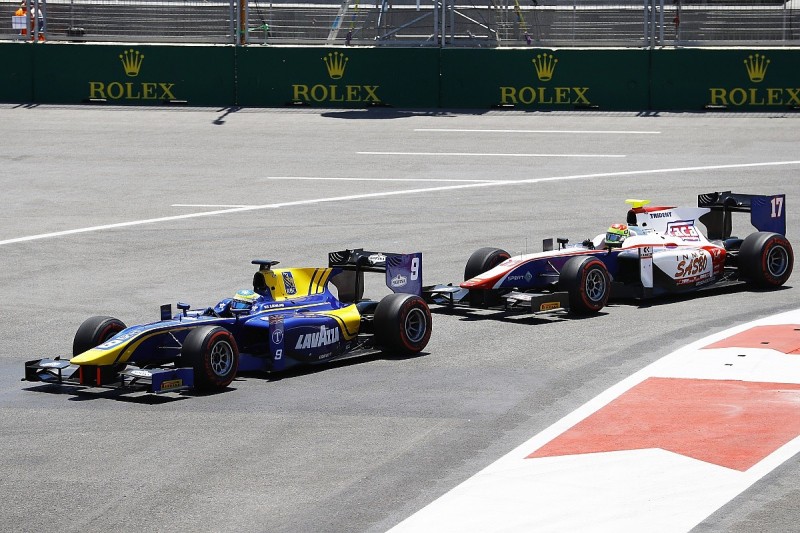 The decision means Rowland is now 28 points behind Ferrari F1 junior driver Leclerc in the championship standings - he had been 22 adrift of the Prema racer before the penalty - but he will now start Sunday's sprint race from second place.

"I'll try and get into the lead and just get away," he said.

Johnny Ceccoto, who crashed out early in the race after stalling on the grid and being restarted in the pitlane, has been given a five-place sprint race grid penalty for speeding in the pitlane moments before his shunt.

The Rapax racer had been due to start last anyway, and he will now be forced to start race two from the pitlane.