Sam Bird scored a stunning Bahrain GP2 Series sprint race victory at the Sakhir circuit, the first win for the new Russian Time team, after a thrilling battle to the chequered flag with Felipe Nasr

The winning margin was just 0.08s at the finish line, as longtime leader Bird's tyres went off in the closing laps, allowing points leader Stefano Coletti (Rapax) and Nasr (Carlin) to catch him.

Coletti braked too late for the final corner on the penultimate lap - having previously locked up at Turn 10 - and overshot the bend, allowing Nasr into second, and giving Bird some brief respite.

But Nasr quickly closed the gap, and pulled alongside as they braked for the final corner of the last lap. Bird just managed to hang on, controlling the wheelspin as his tyres gave up their last ounce of grip.

Nasr pulled out from his slipstream, but just failed to overhaul him by the time they reached the finish line.

"Maybe I pushed too hard too early on the tyres, it was just a case of keeping it on the racing line and hoping they'd battle it out behind me," said Bird.

"Felipe's car was like a rocket at the end. Big thanks to my new team: to win in our fourth race, with no pre-season testing, is amazing."

Nasr, who is still chasing a breakthrough victory in the series, said: "It was a close finish, but I finished second, so we'll keep pushing to get that win."

Coletti admitted third was the best he could do. His points haul puts him back ahead of feature race winner Fabio Leimer, after they came into this race tied for the series lead.

Leimer finished outside the points in ninth, but was lucky to make it around the first corner after being hit by Alexander Rossi, who had clashed with Jolyon Palmer. Leimer carried Rossi's front-wing flap for the remainder of his race, jammed in his sidepod.

Bird and Dillmann fought out an early duel and almost touched at Turn 1 at the start of the second lap. That moment allowed Coletti to pass Dillmann on the run to Turn 4, and Nasr demoted him further on lap three. 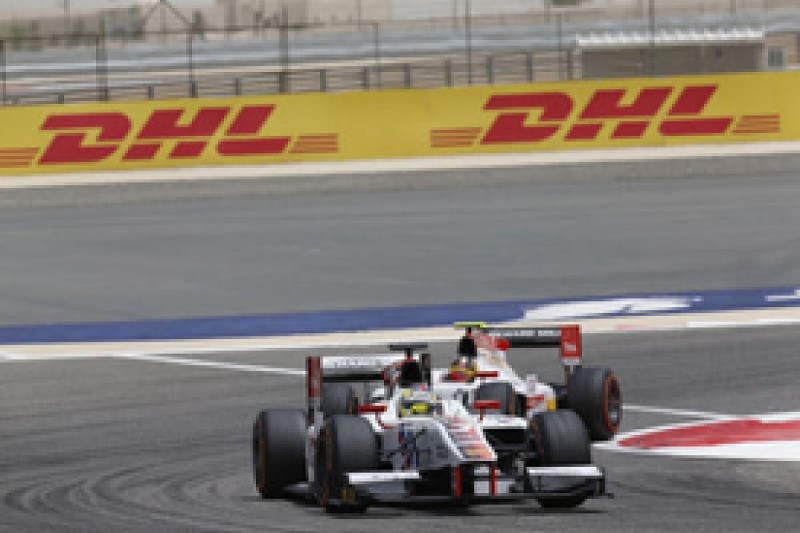 James Calado finished an impressive fifth from 12th on the grid, having struggled with a lack of grip all weekend.

He pulled some sensational passing manoeuvres, the best of which was his around-the-outside move on Adrian Quaife-Hobbs at Turn 11. That came a lap after he had gone around the outside of Palmer at Turn 1.

Palmer finished sixth, ahead of Calado's ART team-mate Daniel Abt and Quaife-Hobbs.