At the start of the 28-lap event, polesitter Markelov maintained his advantage while his fellow front-row starter Ralph Boschung got away very slowly from second.

Most of the pack darted past the Campos Racing racer - Leclerc barely avoiding a collision from eighth on the grid - but an unsighted Raffaele Marciello crashed into the back of the Swiss driver's car.

That incident brought out the safety car but it was not deployed until after the pack arrived in close formation at the tight Turn 3, where Sean Gelael spun his Arden machine after a close clash with Nicholas Latifi.

When the race resumed at the start of lap five of 28, Markelov dropped Alexander Albon - who was up to second from third for ART Grand Prix after Boschung's slow start - and the Thai driver was put under pressure from Rowland. 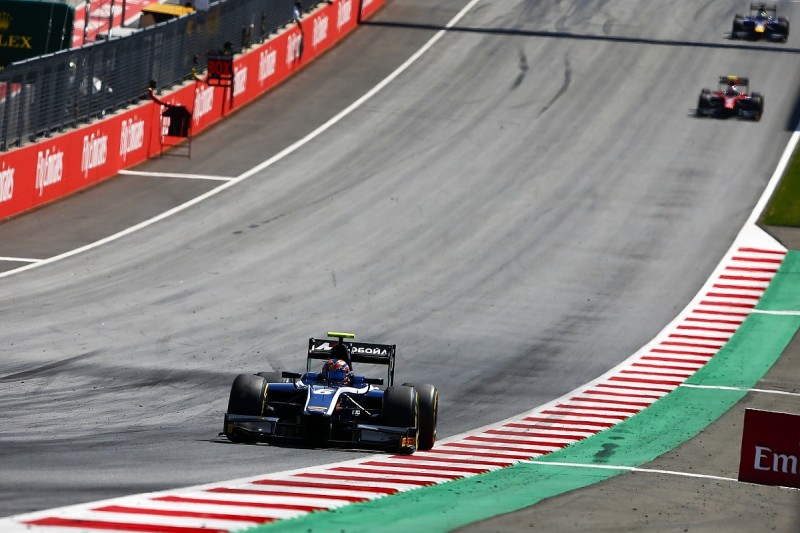 But when Rowland dropped back on the exit of Turn 3 later in the lap he fell into the clutches of Antonio Fuoco.

The Italian driver attacked at the downhill right-hander of Turn 4 but could not pull off a move.

As he then backed off on the outside he was hit from behind by his Prema Racing team-mate - and race one winner - Leclerc, who spun off into retirement as a result.

The recovery of Leclerc's machine prompted the virtual safety car and after it ended Markelov set about establishing a lead over Albon that was never threatened.

Rowland stalked Albon for the rest of the race, getting close to a move on lap 12 before falling away slightly again.

The Briton - who is now 49 points behind Leclerc after his rival's retirement - set a string of personal best laps in the closing stages but could not get close enough to pull off a pass.

Markelov therefore claimed his second F2 win of 2017 by 1.4-seconds at the finish, with Albon securing his first ever podium finish in the series.

Luca Ghiotto pulled off a series of aggressive passes to rise from 14th on the grid to fourth by the end, dispatching Fuoco down the inside of Turn 4 with four laps remaining.

Jordan King made an excellent start to rocket up to fifth in the early laps and he came home sixth for MP Motorsport ahead of Norman Nato and Latifi.

Sergio Canamasas and Sergio Sette Camara rounded out the top 10.

Boschung continued after the start collision but approaching half-distance he retired, as did Robert Visoiu and McLaren F1 junior Nyck de Vries after they collided in the closing stages at the apex of Turn 4 in an incident that will be investigated after the race.

De Vries will also be investigated for a making possible overtaking manoeuvre just as the safety car was deployed on lap one.

Fuoco and Rowland disagree over F2 clash that eliminated Leclerc