Jazeman Jaafar produced a flawless display to claim his maiden Formula Renault 3.5 win in a chaotic event in Monaco

The Fortec racer finished on the podium in both of his previous visits to Monaco and took victory on Sunday from pole position in a race that was interrupted by a red-flag period.

"This is my favourite race and favourite track, just look around, the place is buzzing," said Jaafar. "We have really come a long way with this team, so I am really pleased."

Behind Stoneman, Tom Dillmann had a relatively lonely run to complete the podium for Carlin, both drivers avoiding a messy incident at Sainte Devote on the opening lap.

From the outside of the front row, Oliver Rowland outdragged Jaafar by half a car length into Sainte Devote, but was squeezed out wide couldn't make the move stick to take the lead.

As Rowland slowed to slot in behind his Fortec team-mate, the Briton was hit from behind by Aragon winner Matthieu Vaxiviere, who sustained front-end damage.

Vaxiviere was in turn hit up the rear by Stoneman's DAMS stablemate Nyck de Vries, who was bumped by the Strakka cars of Tio Ellinas and Gustav Malja in line astern.

Rowland was able to continue, but immediately fell down the order after suffering a puncture and was forced to pit. Both AVF drivers were also caught up in the melee at Sainte Devote; Alfonso Celis was forced down the escape road and Beitske Visser spun.

Celis rejoined only to lose control at the Swimming Pool, crashing backwards into the barriers, and the red flags were flown shortly after thanks to an incident at Sainte Devote, where Meindert van Buuren ran into the back of Draco's Bruno Bonifacio early in the braking zone. 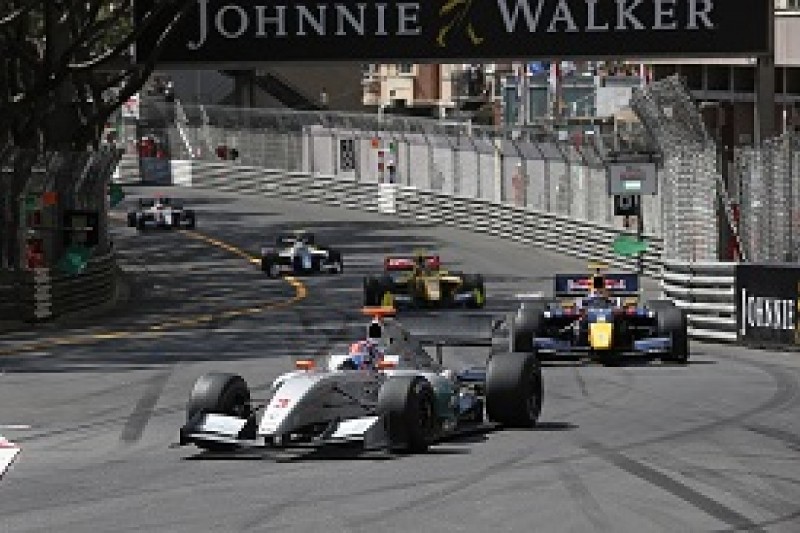 The front of van Buuren's Lotus-run machine wedged onto the rear engine cover of Bonifacio and the two cars were locked together, sending them hurtling down the Sainte Devote escape road into the barriers, where van Buuren's machine was launched high into the air.

The race was stopped while Bonifacio received medical attention and the wreckage was removed. The Brazilian waved to spectactors as he was stretchered from the scene in a neck brace.

The field was eventually released from a safety-car restart on lap six, with Jaafar wasting no time to make a break.

Egor Orudzhev held fourth place from the second Draco car of Pietro Fantin, and the pair would hold station until the flag.

Action was provided by a fired-up Rowland charging through the field from 12th. The Racing Steps-backed driver secured sixth place.

Decision on 18-inch wheels in Formula Renault 3.5 in September