Jean-Eric Vergne sealed the 2018/19 ABB FIA Formula E drivers title despite finishing down in seventh place in the second New York race, which was won by Robin Frijns

Vergne's DS Techeetah squad also sealed the teams' championship ahead of rivals Audi, which had looked set to close the gap before a last lap crash involving Lucas di Grassi and Mitch Evans - the result of which also boosted Vergne's final position.

Vergne came into the last race, which was a significantly calmer affair compared to the first race on Saturday, with a 22-point lead over Lucas di Grassi.

But he started down in P11, behind di Grassi and Evans - his only remaining title rivals.

After being involved in two pile ups in the first race, Vergne's race was a straightforward affair after he made a robust pass on Edoardo Mortara around the outside of the Turn 6 90-degree left on the first lap.

From there he tracked di Grassi, was briefly passed by former title rival Antonio Felix da Costa before he battled back in front of the BMW Andretti driver at Turn 1 on lap 20 of what became a 36-lap race.

Vergne made his way up to ninth by lap 27 by demoting Stoffel Vandoorne into Turn 6 and then looked set to finish there until the last lap crash between di Grassi and Evans.

That pair had not put Vergne's title under serious threat throughout the race as they could only climb to fifth and sixth from eighth and 11th on the grid.

Evans put Daniel Abt under massive pressure for fourth in the closing laps but could not find a way by and was attacked by di Grassi coming out of the Turn 10 hairpin on the final lap.

The Jaguar driver appeared to come across the Audi as they raced up the straight towards the 90-degree left of Turn 11, and they collided as a result and went into the inside wall before ending up in the barriers at the outside of Turn 11.

Evans was able to reverse away and take the chequered flag, while di Grassi was stranded in the wall, but the former was handed a 10-second stop go penalty - which was later converted into a time penalty - immediately after the finish and dropped to 17th in the final result.

Up front, Frijns came home a massive 3.2s clear after a dominant drive.

The Envision Virgin Racing driver made a slow start to drop to third behind race one winner Sebestien Buemi off the line, but pulled off two breathtaking passes into Turn 1 to move into the lead. 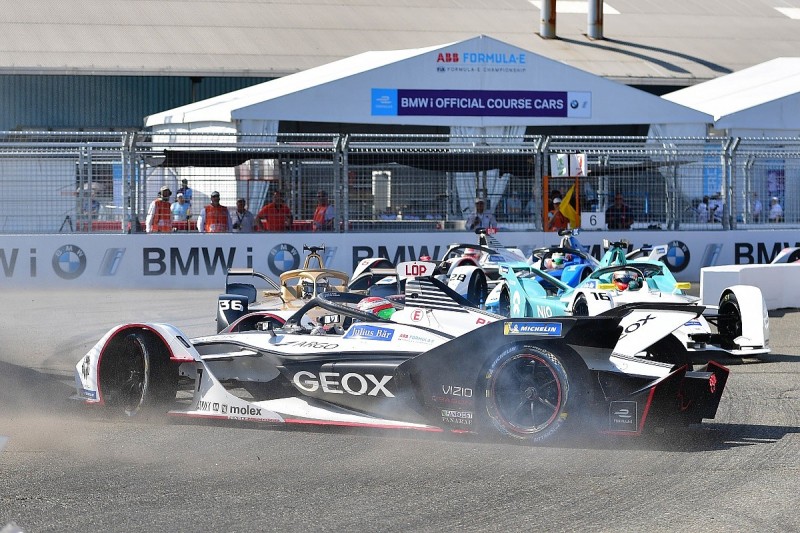 He did so after a safety car period caused by Jose Maria Lopez stopping on the exit of Turn 7 on lap five with what appeared to be suspension damage.

On the first lap, Lopez had been spun around by a tap from Andre Lotterer as the rear of the field came through Turn 6, with Lopez then driving into Lotterer as the DS Techeetah squeezed by.

Lotterer retired a few laps later with suspension damage and was later given a pointless time penalty for causing the collision.

At the point of the safety car, the race was being led by polesitter Alexander Sims, who had made a perfect start from his maiden FE pole and successfully negotiated the early rounds of attack mode usage.

Frijns made his first Turn 1 dive on lap 9 to depose Buemi for second and set about pursing Sims.

The Dutch driver was able to stay with Sims even when the BMW driver was in his second attack mode and on lap seven - when they were both in the standard 200kW mode - Frijns made a repeat dive at Turn 1.

They made slight contact at the apex, with Sims forced a touch wide and Frijns shot through to take a lead he would never lose.

Sims spent the rest of the race defending against Buemi - robustly at times, particularly at Turn 6 - and he held off the Nissan e.dams driver to seal second and take a first FE podium.

Sam Bird finished fourth as Virgin took third in the teams' standings ahead of Nissan, with DS Techeetah's first teams' triumphed sealed by the late crash.

Abt took fifth ahead of Oliver Rowland, with Vandoorne, da Costa and Gary Paffett rounding out the top 10 behind Vergne, who is now FE's first double champion and the first driver to successfully defend a title.