Sam Bird qualified second ahead of Jaguar's Mitch Evans, while championship leader Jean-Eric Vergne failed to make it through from the group phase.

Rosenqvist rocketed around the Circuito Cittadino Dell'EUR to claim pole with a 1m36.311s, setting blistering times in the opening two sectors.

He clipped the wall at the exit of Turn 12, which will form the start of the grid for the race, but was able to carry on and complete his lap to claim his third pole of the 2017/18 season.

Rosenqvist cuts Vergne's standings lead to 27 points as a result of topping qualifying.

Bird, currently third in the drivers' championship, held provisional pole after running second in superpole and was rapid in the final sector.

But the Virgin Racing driver was pushed down to second by Rosenqvist's lap, and he will line up ahead of Evans - who had to wrestle his car over the bumps under braking for the Turn 13 hairpin on his superpole effort.

Renault e.dams' Sebastien Buemi also lost time at the same point, missing the apex of the hairpin after hitting the bumps hard on the approach and losing almost a second.

Buemi will start fifth, behind Andre Lotterer, who topped the group phase with a stunning final lap in group four.

But Lotterer could not repeat that performance in superpole and wound up 0.924s behind Rosenqvist after clipping the barrier at the exit of Turn 15. 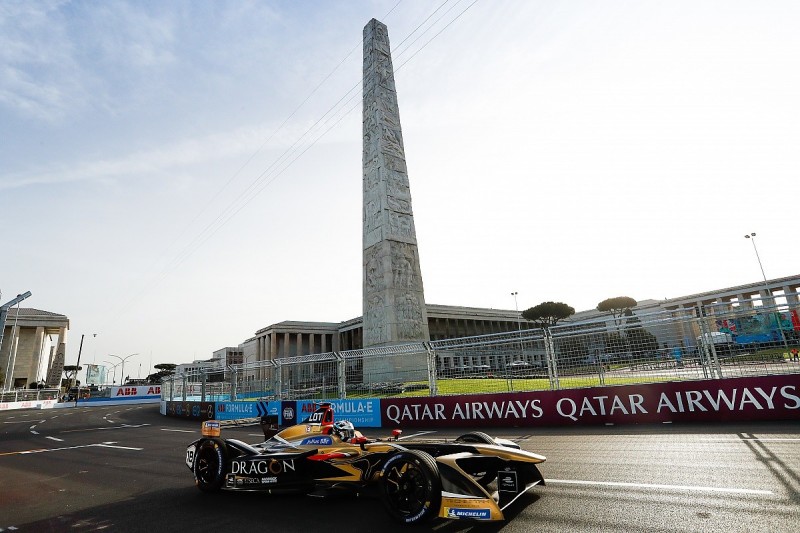 At the conclusion of the group qualifying phase, Audi's Lucas di Grassi was bumped from the superpole session by Lotterer's last gasp improvement so will start sixth.

Oliver Turvey qualified seventh ahead of Vergne, who failed to progress from group two.

Daniel Abt and Nick Heidfeld (Mahindra) rounded out the top 10.

Alex Lynn was 11th after crashing twice in practice, ahead of Andretti driver Tom Blomqvist and Nelson Piquet Jr.

Jerome D'Ambrosio and Luca Filippi did not cross the line in time to start their flying laps in group one and ended up down in 16th and 18th after only setting non-competitive times as they got up to speed.

The pair were split by Venturi's Edoardo Mortara, who finished his group three lap with broken right-rear suspension after hitting the wall at the exit of Turn 12.

At the rear of the field are Jose Maria Lopez and Antonio Felix da Costa, who were involved in a bizarre collision in the pitlane.

Da Costa emerged from his Andretti garage just after Lopez had exited the Dragon pits - the two teams are side by side in the pitlane.

The Andretti driver speared into Lopez at low speed and pinned his car against the inside pitwall.

Both drivers were visibly agitated as they climbed out of their stricken machines and neither could take part in qualifying as a result of the incident.