Edoardo Mortara and Venturi Racing pulled off a strategy masterclass to each earn their second Formula E victories in Puebla as the Swiss driver moved top of the points.

He pounced on the duel between front-row starters Oliver Rowland and Pascal Wehrlein to move for his second attack mode activation and rejoined from the effective joker lap in clean air.

From there, Mortara kept Wehrlein at bay thanks in part to repeatedly finding masses of time through the banked final Turn 15 to prevent the Porsche from attempting a pass.

But it looked as though Wehrlein was playing the long game, sitting in the slipstream in the thinner air of the high-altitude Miguel E. Abed circuit to gradually gain an energy advantage.

However, when it appeared as though Wehrlein was ready to make his play for a first Formula E win for him and Porsche - the Stuttgart car disqualified from victory in the Saturday race for not declaring tyre allocation - he made a small error that cost him 1.5s.

On the run into Turn 7, which has caught out drivers all weekend, he suffered a slight lose at the apex but was hurt more when he washed wide over the marbles and compromised his tyres.

That allowed Mortara to streak through to a well-executed 2.296s triumph, marking a return to the top step after victory in Hong Kong in 2019 and extracting a 10-point cushion atop the standings.

Wehrlein claimed second - but is under investigation again for suspected maximum power over use - despite appearing to lose the strategy battle with Rowland early on.

The pole-sitting Brit made a strong launch while Wehrlein was slow away, which gave Rowland breathing space into Turn 1 as Mortara pounced around the Porsche under braking.

Rowland then made two successive and very early plays to activate his attack mode, initially rejoining the circuit in fourth and getting caught behind Wehrlein, despite gaining the better part of 0.5s through the joker lap diversion to close to the German.

It looked as though Rowland would stay put in second for the duration until a mistake at Turn 10 meant he clonked the wall and dropped. 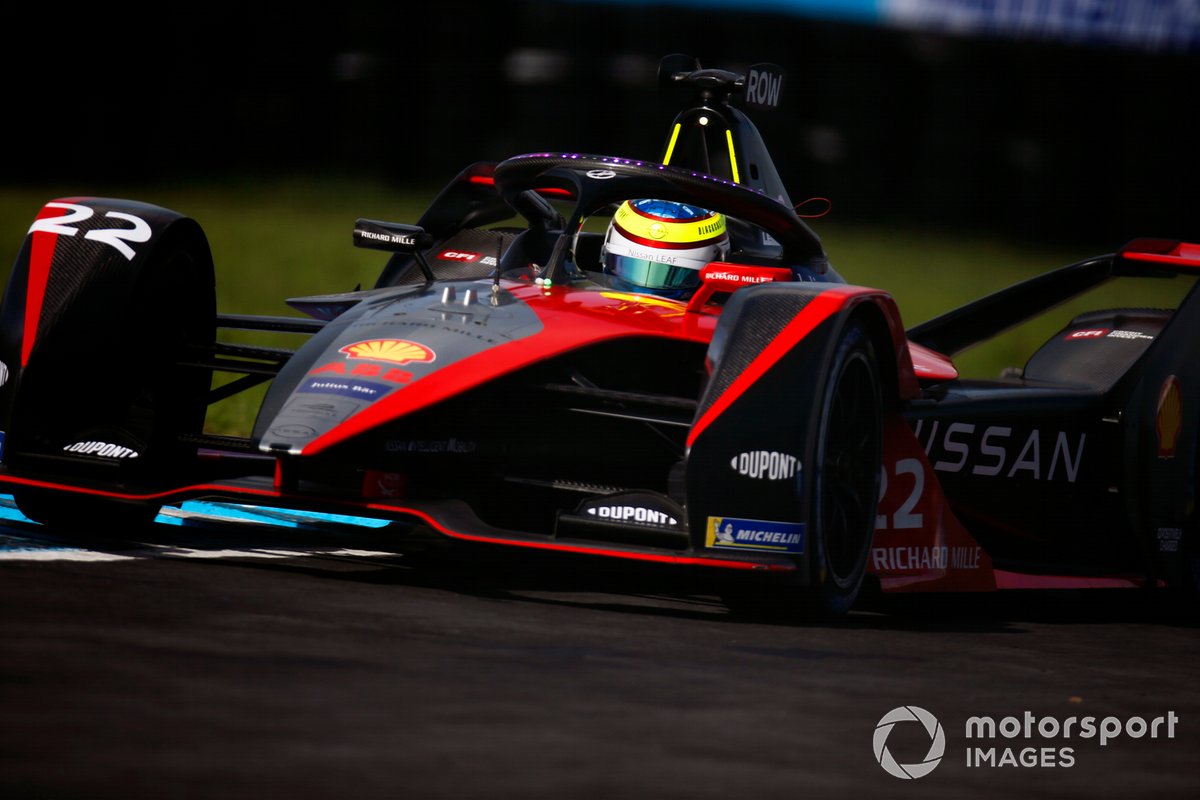 That damage left him prey to the Envision Virgin Racing machine of rookie Nick Cassidy, who leapt by a handful of laps from home for the Kiwi to earn a first Formula E podium.

Rowland hung on to fourth after taking late avoiding action into Turn 11 when he locked up and nearly tagged Cassidy into a spin.

The BMW Andretti contingent was led by Jake Dennis in fifth, the rookie coming out on top of a scrappy battle for points ahead of Alexander Lynn.

With several of the cars carrying advertising banners from brushes with the wall, Maximilian Guenther secured seventh ahead of Jean-Eric Vergne.

The DS Techeetah racer looked sound in fourth for much of the duration but spun at Turn 9 as he continued to use the regen braking paddle past the apex and unsettled the car.

Mitch Evans ran to ninth for Jaguar Racing and Saturday runner-up Rene Rast completed a remarkable climb from last - when his qualifying lap was thrown out for rejoining the track in an unsafe manner - to claim a point in 10th for Audi.

Robin Frijns was similarly deft at picking up places, rising from 21st after a series of collisions for his rivals.

Among them, Saturday victor Lucas di Grassi was handed a drivethrough penalty for eliminating Nyck de Vries after the Brazilian rejoined from the attack mode joker lap and whacked the Mercedes at Turn 9.

Di Grassi was also in the wars at Turn 7, hitting Sam Bird after Sebastien Buemi appeared to slow for Nissan e.dams, with Bird crossing the line 12th.

That left a bodywork-damaged Stoffel Vandoorne to score 12th over Buemi.

Reigning champion Antonio Felix da Costa made an uncharacteristic mistake when he ran wide at the blind Turn 7 and smashed into the concrete wall heavily.

Although the suspension was buckled, the Portuguese, entering the race second in the championship, was able to crawl his car to an exit road to avoid a safety car.