Nissan e.dams' Sebastien Buemi won a chaotic ABB FIA Formula E race in New York, while Jean-Eric Vergne had his standings lead cut after he was involved in multiple crashes

Buemi led the race throughout after starting on pole, but he had to withstand intense pressure from a series of rivals.

First, Jaguar's Alex Lynn pressured Buemi throughout the first half of the race after he had shot past Pascal Werhlein from third on the grid on the run to Turn 1.

Lynn took an aggressive approach to his attack mode activations, using both within the first 14 laps of what would become a 36-lap event, but Buemi covered him each time by taking his own activations one tour later on each occasion.

But Lynn's challenge ended when he lost drive heading towards the Turn 10 hairpin and he pulled over a few corners later, which triggered a safety-car period as he was stranded in his car.

At the restart, Buemi led BMW Andretti driver Alexander Sims and Daniel Abt, who had been following the top two in the early stages, making it a four-way pursuit for first place.

Sims attacked Buemi going into the first corner as racing resumed, but soon found himself under pressure from Abt as the Audi driver took his second attack mode activation at the end of the race's second third.

But as Abt attacked Sims at Turn 2 he went wide and lost several places, which promoted Jaguar's Mitch Evans - who had risen stealthily from 13th on the grid - into third, and that became second when he deposed Sims with a barging dive to the inside of the tight Turn 6 left-hander on lap 27.

Evans then closed in on Buemi but a mistake at Turn 6 a few laps later cost him ground and he found himself defending against Antonio Felix da Costa - who had passed Sims - for the rest of the race.

Sims took fourth ahead of Lucas di Grassi, who had battled his way up the order from 14th on the grid - taking advantage of the first incident involving Vergne.

On the second lap, Sam Bird tapped Jose Maria Lopez into a spin at Turn 7 as Bird ran side by side with Lopez's Dragon Racing team-mate Maximilian Gunther, with Bird later picking up a 10-second penalty for causing the incident.

Lopez's half-spun car meant the drivers behind had to slow and Vergne, who had dropped from 10th to 12th on the first lap, picked up nose damage as he was forced to brake, and was then hit from behind by his team-mate Andre Lotterer. 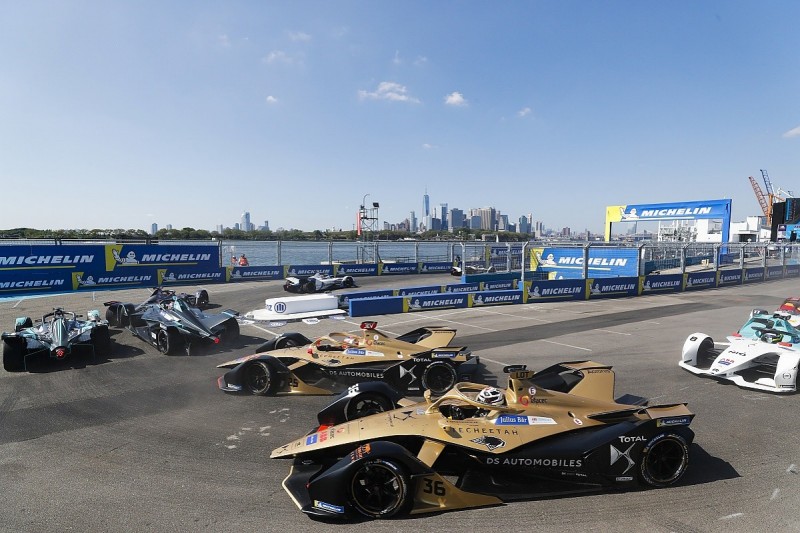 Vergne came in to change his nose and ran at the rear of the field - ahead of Lotterer, who came in for his own repairs after trying to stay out and hitting the barrier on the outside of Turn 2 with his front wing wedged underneath his car - until the safety car came out.

In what was a chaotic finale for those behind the leaders, Vergne climbed into the points, taking advantage of his remaining attack mode activation compared to many of the others.

But at the start of the final lap, Vergne dived to the inside of Venturi's Felipe Massa at the Turn 1 switchback and the pair made contact, with Vergne forced deep but still alongside Massa.

They came together at Turn 2, with Vergne hitting the wall on the inside, heavily damaging the front of his car again and spinning Massa.

The following cars - Lotterer and Stoffel Vandoorne - hit the stranded Massa and Vergne, with Jerome D'Ambrosio smashing over the top of Massa's car.

They were able to escape, but Vergne had to crawl to the chequered flag, falling to 15th and finishing over 90 seconds behind Buemi.

Vergne's lead is now down from 32 points to 22 over di Grassi, with Evans and Buemi three and four points further back respectively.

Those four are now the only drivers still in contention for the title in Sunday's final race of the season.

Abt eventually finished sixth ahead of Wehrlein, with Bird ending up eighth once his penalty was applied.

D'Ambrosio managed to take ninth despite his drama, with Oliver Turvey rounding out the top 10.