Di Grassi, who enters the weekend in Mexico with a 10-place grid penalty after an inverter change following his retirement in Santiago last time out, set the best time of the morning in first practice.

The Brazilian produced a lap of 1m01.158s during the 45-minute opening session, with Venturi driver Edoardo Mortara ending up second quickest during the early running.

In practice two, Rosenqvist spent the majority of the 30-minute session in first place after putting in a time of 1m01.44s early on while using the full 200kW available to the drivers.

Di Grassi responded after a mid-session lull in fast laps to pip Rosenqvist to first place by 0.239s.

He set what was then the fastest time in the first sector at the Autodromo Hermanos Rodriguez and hung on around the rest of the lap to take the top spot.

The second session was suspended in the closing stages after DS Virgin driver Alex Lynn hit the barriers around the long second turn right-hander.

Lynn was attempting to overtake Rosenqvist but slid wide on the dusty off-line approach and clattered the barriers with the left-hand side of his car, bringing out the red flags. 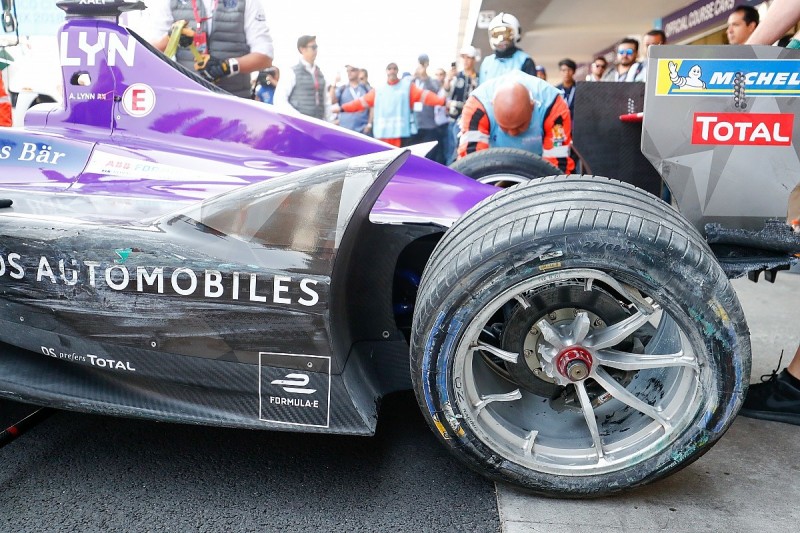 The session restarted with just under two minutes remaining and several drivers attempted to improve their positions with one final 200kW effort.

Renault e.dams driver Sebastien Buemi bettered di Grassi's time in the first sector but faded as the lap went on and locked up heavily approaching the final Turn 15/16 chicane, which runs through the former Peraltada corner.

The 2015/16 champion did improve his best time in practice two but ended up eighth quickest in that session.

Mortara's best time from the first session put him fourth fastest overall, but he ended up down in 19th place in second practice - one spot ahead of his team-mate Maro Engel.

Nick Heidfeld, who slid wide on a full power attempt towards the end of practice two and hit the flexible poles at the edge of the track through the Turns 8-9 double left hander in the stadium, was fifth fastest overall.

Lynn ended up sixth in the combined standings and fifth in practice two despite his crash, with Antonio Felix da Costa, Daniel Abt and championship leader Jean-Eric Vergne seventh, eighth and ninth in combined times.

Buemi's late improvement left him 10th after the two sessions.

Eleventh-placed overall Jose Maria Lopez clipped the wall at Turn 11 on the exit of the stadium section a third of the way through second practice and had to immediately pit and switch to his second car.

Sam Bird, who is third in the points behind Vergne and Rosenqvist, was 12th fastest in the combined standings.