The Renault e.dams driver's 1m20.599s effort in the second of the two sessions was a full second faster than Rob Huff's pole time in May's WTCC event.

Buemi, who required a battery change after the opening session, was a quarter of a second clear of Mahindra's Felix Rosenqvist in FP2.

The majority of drivers focused on runs at race power (170kW) in FP1, and most of the field did not complete a 200kW run in FP2 either thanks to a crash for Sam Bird with a few minutes remaining.

The DS Virgin driver lost the rear through Turn 8 and drifted into the wall in a heavy impact that left the car stranded and caused a red flag.

Bird's team-mate Jose Maria Lopez also had a difficult practice session, damaging both his cars in FP1 after impacts with the wall.

Triple WTCC champion Lopez has three years' experience of the Marrakech circuit, but ended FP2 down in 15th without posting a representative lap time.

With the second session not restarted, Buemi was left quickest from Rosenqvist, Jean-Eric Vergne, Oliver Turvey and Loic Duval. 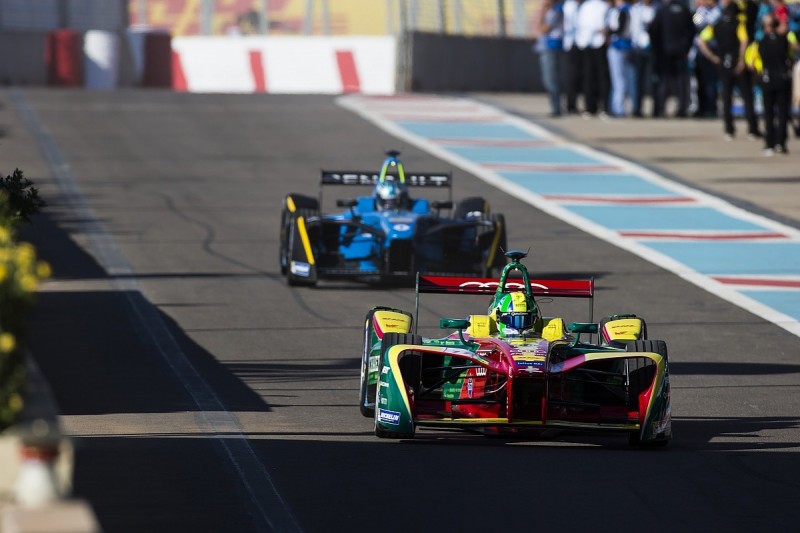 In the morning session, Lucas di Grassi was quickest with a 1m21.923s lap.

A cold start to the day, combined with a lot of sand on the circuit, meant the session was considerably slower and featured many errors.

Di Grassi had a scruffy session and was one of several drivers to make a mistake under braking for Turn 7, while Jaguar's Mitch Evans spun at Turn 1 after getting onto the dusty outside line.

Jaguar continued its low-key start to Formula E with a muted practice, which ended with Evans 14th and Adam Carroll 20th.