Abt Audi Sport's di Grassi is nursing an ankle injury, but put any pain to one side to edge a fascinating qualifying session on FE's return to the former Tempelhof airport.

Di Grassi ran first in the superpole and posted a 1m08.312s, before Jose Maria Lopez lapped just one-thousandth of a second slower - a deficit the Argentine admitted "hurts".

Felix Rosenqvist topped the group phase of qualifying and was on course to beat di Grassi to pole after setting the best first and second sectors on his flying lap.

But he clipped the kerb at the Turn 9 hairpin and the lost momentum, and with another small slide through Turn 10, consigned him to third on the grid, less than a tenth slower than di Grassi.

Rosenqvist's Mahindra team-mate Nick Heidfeld topped practice but faded in the shootout and wound up fourth, comfortably clear of Sam Bird, who had a scruffy superpole lap.

Pole for di Grassi earns him three points and cuts Buemi's championship lead to 40 points, and the Brazilian will be further buoyed by the struggles that left Buemi on the seventh row. 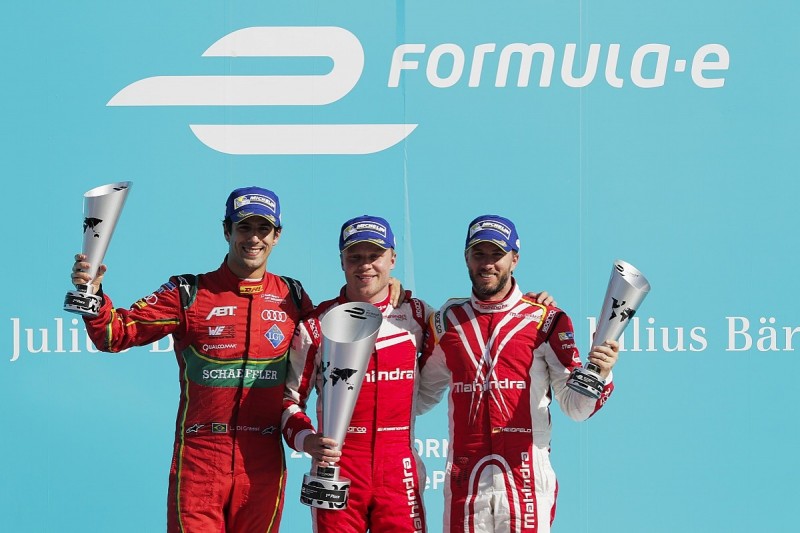 Buemi was quickest in the first practice session but was only ninth in FP2 after a mistake on his 200kW lap, and his troubles worsened in qualifying.

The winner of five of the six races so far this season was almost 0.8s slower than Rosenqvist's benchmark across the four qualifying groups, and he missed out on the superpole by 0.6s.

"I had a lot of oversteer and struggled to put a lap together.

"It's going to be a tough one. The speed is not there."

The Renault-powered drivers struggled in general. Jean-Eric Vergne was best of the quartet in his customer Techeetah entry in sixth, ahead of Oliver Turvey, Daniel Abt, Buemi's works Renault team-mate Nico Prost and Jerome d'Ambrosio.

Stephane Sarrazin will start 12th for his first race since switching to Techeetah, one place behind his old Venturi team-mate Maro Engel.