Nyck de Vries led a 1-2 finish for the Mercedes Formula E team in a truncated second practice for the Diriyah E-Prix, which was interrupted by two separate red flags

De Vries set the early pace in the 30-minute afternoon session, his time of 1m10.535s putting him well clear of the top Nissan e.dams of Oliver Rowland.

The first red flag was waved with 17 minutes on the clock when the rear of Muller's Dragon Penske snapped going into Turn 7, and he hit the barriers rear-first and suffered heavy damage to the bodywork.

When practice resumed six minutes later, lap times tumbled at a rapid rate, with a number of drivers breaking into the 1m09s.

Rowland was the first driver to dip into the 1m08s, before de Vries put himself back on top with a time of 1m08.853s.

That was fractionally quicker than his Thursday benchmark, which was set in much cooler conditions during the night-time, and remained unbeaten after Robin Frijns brought out another red flag after crashing his Envision Virgin Racing with just two minutes to go. 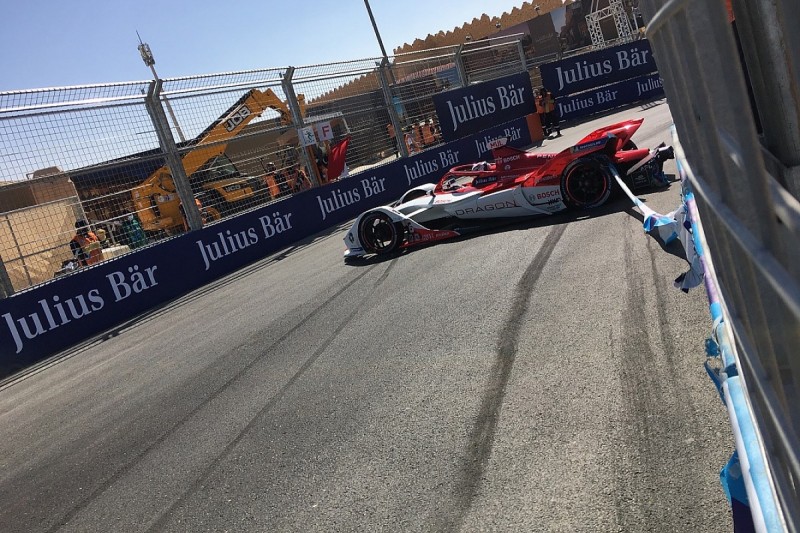 Stoffel Vandoorne finished two tenths behind his team-mate in second, while Venturi driver Edoardo Mortara's time of 1m08.836s effectively made it a 1-2-3 for Mercedes powertrains.

Rowland was shuffled down to fourth in the final order ahead of Porsche's Andre Lotterer and, despite a brush with the wall, Sergio Sette Camara was a strong fifth for the Dragon Penske team that is starting the season with the same powertrain as last year.

Alex Lynn was Mahindra's top runner in seventh, half a second down on de Vries, while Sebastien Buemi was eighth in the second of the Nissan cars ahead of Mitch Evans (Jaguar) and Maximilian Gunther (BMW Andretti).

Sam Bird was 11th in his second practice outing with his new Jaguar team, while Frijns's previous lap of 1m09.539s was good enough for 12th despite his late crash in the session.

The two DS Techeetah cars were surprisingly off the pace with Antonio Felix da Costa and Jean-Eric Vergne finishing 18th and 20th respectively, although not all drivers were able to complete full power laps in the session.