While the switch to night-time running was expected to be the biggest change for the third running of the Diriyah E-Prix, some corners have also received minor tweaks in the build-up to the race.

This includes the pit exit that feeds into Turn 2, the Turn 9/10 right-left sequence, and the Turn 18/19 complex which follows the main straight that stages the race start.

PLUS: The magnificent seven Brits fighting for FE bragging rights

Autosport understands that the amendments have been made to adapt to the changes the local authorities are making to the road network that forms part of the track.

It is understood that all Formula E teams were informed about potential track changes last Thursday, with the final configuration of the track only shown on Monday.

These last-minute changes could affect the simulator programmes of Formula E teams and would mean race drivers face a tight schedule to try the new layout on the sim before flying to Riyadh. 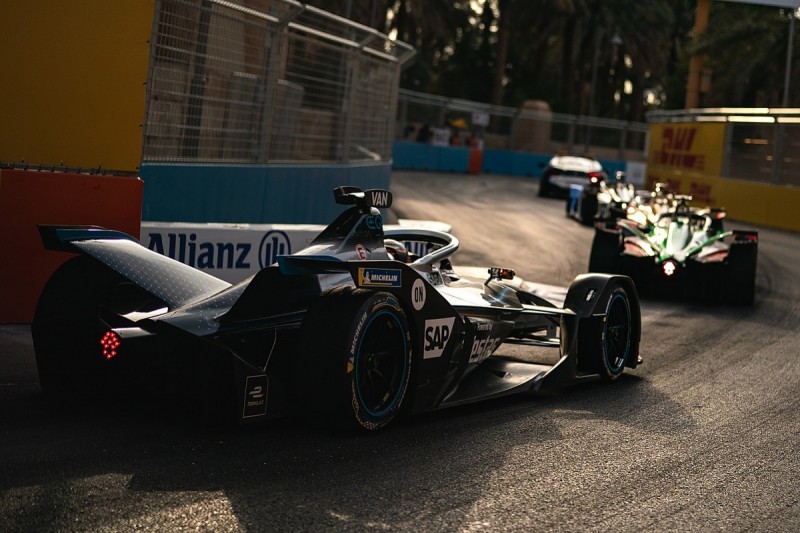 Speaking about the track changes, Nissan driver Sebastien Buemi told Autosport: "Little changes have been made to the Riyadh track, so we weren't going to have the final track until 2pm [on Monday].

"The FIA has sent a small update. They have somewhat improved the pit exit: before, when someone left the pits, he couldn't see the cars that were on the track. Now, they've slightly moved the walls.

"Then there's a downhill chicane which already was very fast - they've made it even faster. They've opened the walls as much as they could.

"And after the long straight following the start, there was a section where we'd cut the track a little bit - they put up walls so that we don't cut it anymore.

"These are small changes, but it's important to prepare on the simulator with the real track - as representative as possible.

"We didn't know if we were going to have it [on Sunday night] or [on Monday], because the [FIA] document was sent on Friday.

"As a consequence, those who make the track have spent the whole weekend working for it to be ready as soon as possible.

"We get the document 14 days before the first race. They try to reduce costs by showing the layout just 14 days before, but in the end, I don't feel like it reduces anything: everyone just works like crazy afterwards."

Formula E teams are expected to face similar headaches in the inaugural Valencia E-Prix in April, with the series planning on sharing the exact layout only two weeks prior to the race.