The defending champion started seventh after a five-place drop thanks to his Renault e.dams Z.E.16's fire extinguisher coming in underweight after qualifying.

Buemi executed a superb race to rise up the order, and head home Sam Bird and poleman Felix Rosenqvist.

Mahindra rookie Rosenqvist bolted into an early lead, but was using slightly more energy than most of his pursuers, initially headed by Bird before Jean-Eric Vergne assumed second.

Rosenqvist eked out a margin of more than four seconds over Vergne before stopping at the end of lap 16, with the Techeetah driver following him into the pitlane.

Bird and Buemi - who passed team-mate Nico Prost, Daniel Abt and Nelson Piquet Jr to run fourth - ran a lap longer and swapped places on their in-lap.

After the car swaps, Rosenqvist led Vergne by five seconds with Buemi, who had a brief off-track moment just after passing Bird, 10 seconds in arrears.

But that gap started to come down immediately, with Buemi taking more than a second out of the leading duo.

Vergne was then forced to serve a drivethrough penalty for speeding in the pitlane, and with the Renault-powered Techeetah driver out of the picture Buemi only had Rosenqvist standing between him and victory. 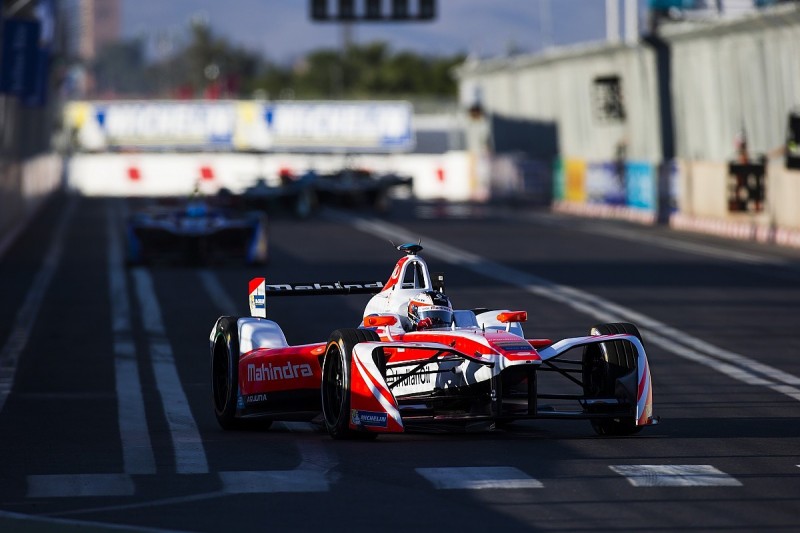 That six-second gap was down to nothing with six laps remaining, and though Rosenqvist defended on the run down to Turn 11, Buemi edged ahead on the outside and got the job done as they hit the brakes.

Bird also made it past Rosenqvist and into second place two laps from the end, though Rosenqvist had enough of an advantage over Prost to make it onto the podium in only his second Formula E race.

Prost claimed fourth ahead of the Abt Audi Sport duo of Lucas di Grassi - who rose from 12th on the grid with a steady drive - and Daniel Abt.

Oliver Turvey took seventh on the final lap from Vergne, who fought Prost for fourth initially after serving his penalty, but faded as he desperately tried to save energy.

Turvey's NextEV team-mate Piquet fell from fifth to 18th with a problem in the car swaps, while Venturi's Maro Engel also lost a probable points finish due to an issue in the pits.

Adam Carroll was the first of the Jaguar's home in 14th, while team-mate Mitch Evans was a lapped 17th after a penultimate-lap off.