In a remarkable last race of the season, the Mercedes driver avoided a huge startline shunt between closest chasers Mitch Evans and Edoardo Mortara and then tagged with both Porsche drivers on his climb from 13th into eighth place.

Although his pole-sitting team-mate Stoffel Vandoorne slipped to third after an early mistake, it was still sufficient to ensure Mercedes earned the championship double.

The dramatic race was marred by a near-instant crash on the startline when Evans, who was third on the grid and in a strong position to depose de Vries, failed to launch.

His Jaguar Racing machine lurched forward a matter of inches before his car stopped completely and he was left vulnerable on the grid.

Those starting directly behind on the right-hand side of the grid swerved and missed Evans as he checked his mirrors until Mortara arrived from his starting slot of 11th. 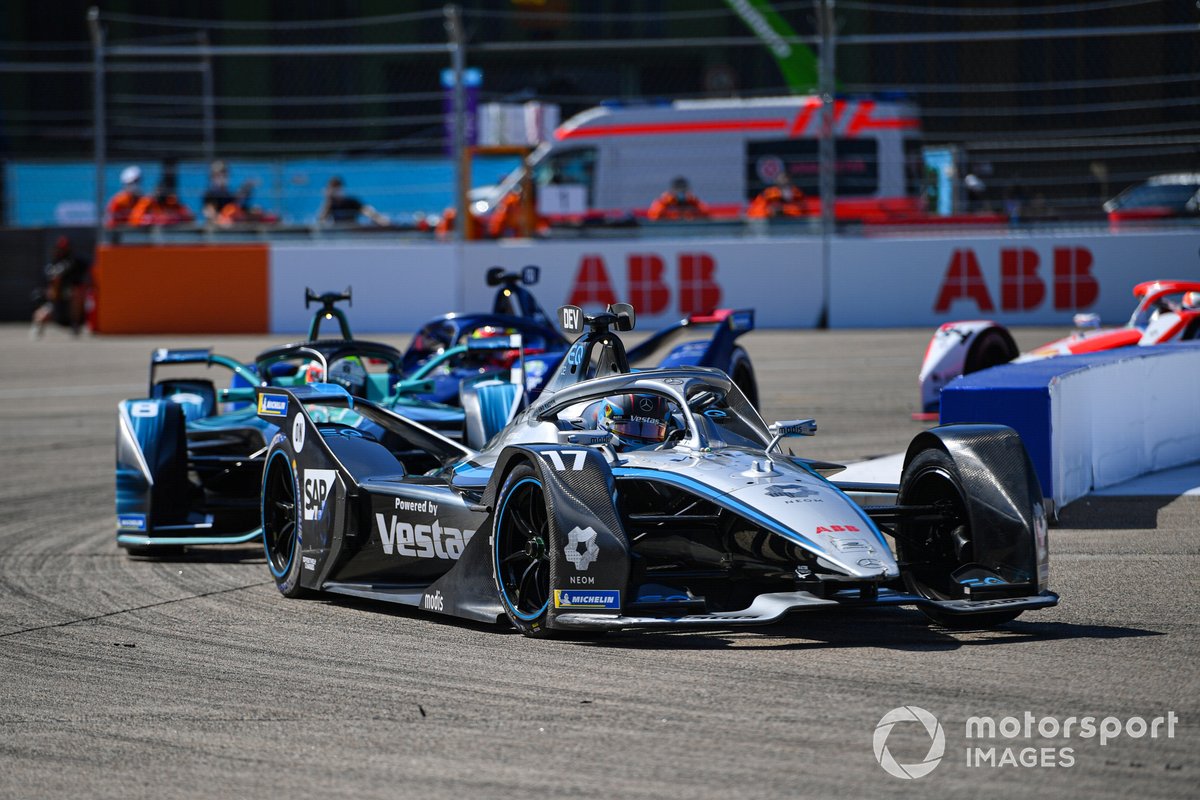 Mortara, second in the points entering the race, careered into Evans and ripped the front-left wheel assembly off as the rear of Evans’ car was lifted into the air and spun around.

The red flag was called, but not before Nato had sent his Venturi Racing car around the outside of Tom Blomqvist into Turn 1 for fourth after the NIO 333 driver locked up.

Evans and Mortara were eventually extricated from their cars, with Mortara taken to the medical centre for precautionary checks.

De Vries was fortunate not to be caught up in the melee as he dived for the gap between the inside wall and the two-car wreckage and had to run under a shower of debris to emerge in 12th.

Then a third title contender was eliminated almost immediately at the delayed race restart when BMW Andretti rookie Jake Dennis careered into the wall on the exit of Turn 1.

The Briton, who was de Vries’ closest rival after the Evans and Mortara crash, locked the rears as he closed on Sebastien Buemi, who had been slow at the restart in his Nissan e.dams car.

The rear of Dennis’ car then stepped out and he tagged the concrete and ran straight into the Tecpro barrier on the outside of the wall to bring out a full-course yellow. 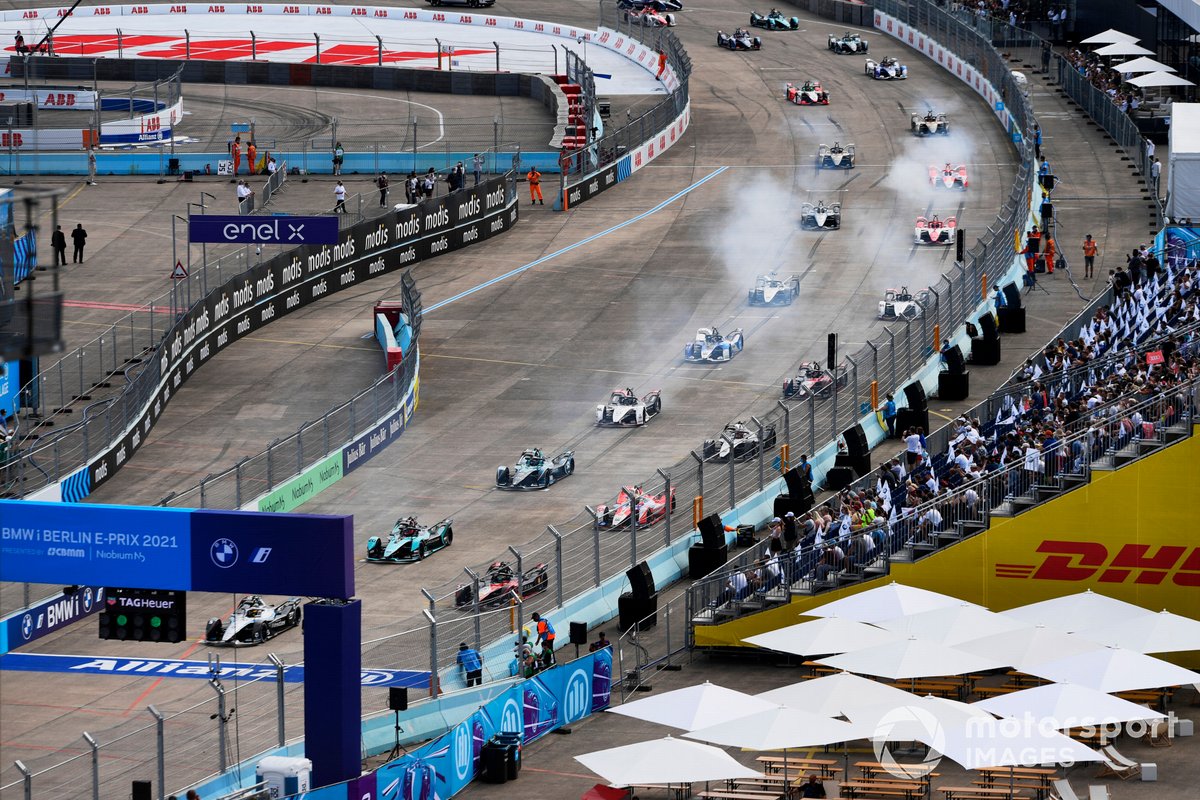 Second-starting Oliver Rowland managed to stick with leader Vandoorne on the lap-four restart and ran right to the rear of the Mercedes as the lead duo began to edge ahead.

Nato dived for his attack mode and returned in fifth but straight away passed Blomqvist again, relegated Alexander Sims for third place and then attempted to slide around the outside of Rowland through Turn 2.

Rowland responded by going for his attack mode to leave Nato just four tenths behind Vandoorne, who delayed his use of the 35kW boost.

With Nato in the faster setting, Vandoorne did not resist the move from the Mercedes powertrain customer car into Turn 1 to allow Nato to take the lead.

Vandoorne then ran wide at the Turn 2 exit to enable Sims to climb into second and Rowland to pass also.

Nato, expected to be replaced at Venturi Racing by Lucas di Grassi, began to gap the field to the tune of 1.7s as he used up the last of his second four-minute attack mode.

A second full safety car was then called into play after Antonio Felix da Costa’s title defence came to a premature end following a collision with di Grassi in Audi’s final race in Formula E. 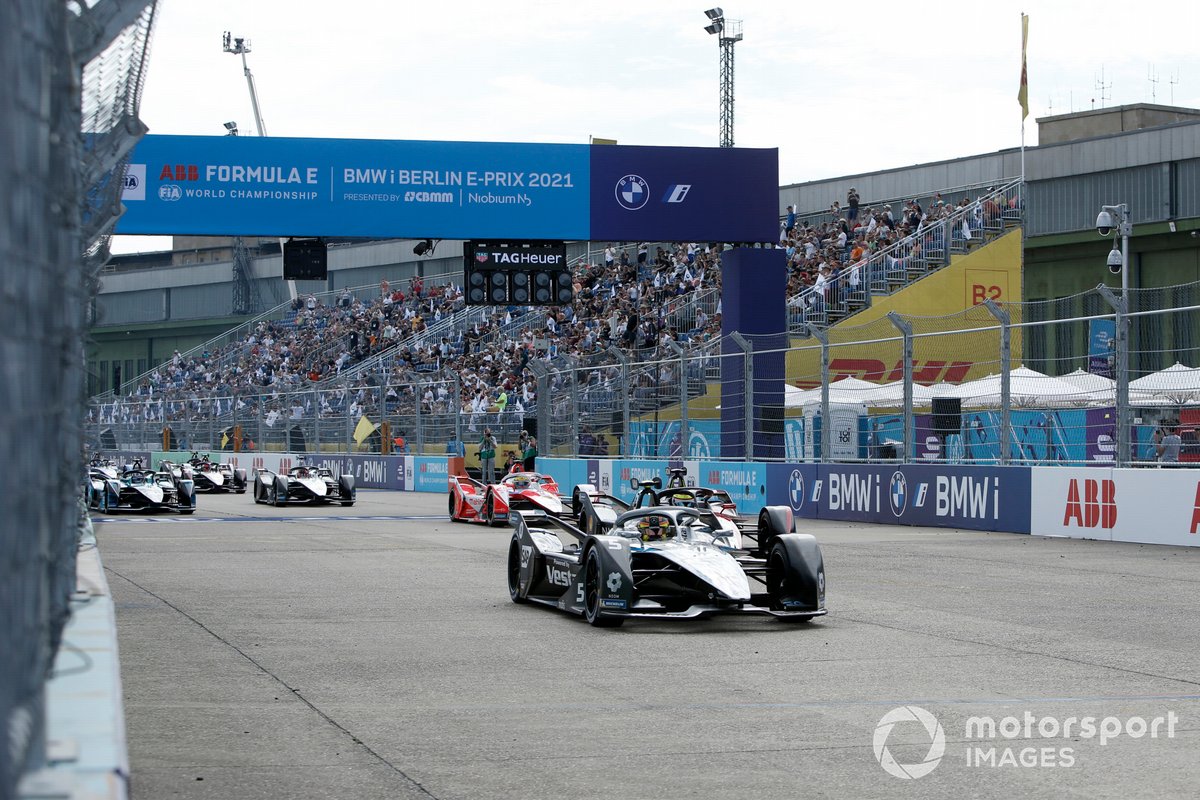 Di Grassi lunged down the inside in their battle for 13th place on the run into the Turn 9 hairpin and, at the apex, the wheels of the two cars appeared to lock.

On the exit, that dragged da Costa’s DS Techeetah machine into the outside wall, where he retired.

That put Mercedes in position to win the teams’ title while the German manufacturer is poised to announce it will quit Formula E ahead of the new Gen3 rules coming in.

At the final restart, Rowland nudged into the rear of Nato into Turn 1 as Sims followed in a three-car train.

De Vries’ impressive rise up the order took him to fifth at the expense of both duelling Porsches.

He then thumbed the fanboost advantage into Turn 1, where Sims defended stoutly and de Vries still tried to bully it down the inside, which allowed Andre Lotterer to find space as his rivals were delayed.

At the apex of Turn 2, de Vries defended from Lotterer to leave Sims to run through and then the recovering Vandoorne made it a three-wide sprint to Turn 3.

However, as Vandoorne battled Lotterer, the cars pinched with de Vries on the inside and the Dutch racer came through with bent steering.

As Nato crossed the line for a maiden Formula E victory by 2.27s over Rowland in his last race for Nissan e.dams, Vandoorne recovered past Sims for the final step on the podium.

Lotterer bagged fourth for Porsche over Sims and Wehrlein, while Sam Bird completed a stellar rise from 22nd on the grid all the way to seventh to salvage points for Jaguar Racing.

De Vries eventually crossed the line in eighth after a further dice with Wehrlein and Rene Rast – who opted to start from the pitlane to save energy after qualifying 19th and ranked ninth for Audi in its farewell race.

Di Grassi was handed a drivethrough penalty for his collision with da Costa and clocked 20th.