Remaining on free-to-air television in the UK was "essential" to Formula E, the series says, and it has been wise to recognise this with the new Channel 5 deal announced last week

Channel 5 is not a sports network, let alone a motor-racing one. Adding World Rally Championship highlights to a package that includes the English Football League, boxing and international cricket does not make it a haven for the sports enthusiast.

But it is free-to-air, and more in your face on TV listings guides than FE's previous regular channel, ITV4. Those two arguments explain FE's glee at striking its new deal.

"Free to air was essential to us," says FE's director of media Ali Russell. "We had some ITV1 [slots in the previous deal], but the opportunity with Channel 5 is incredible.

"We were able to secure prime-time slots, and gain support from their other channels and digital channels."

Channel 5 will then pick up the races. This variety, which comes from parent company Viacom, is supposedly key to FE accessing a greater audience.

The series appears well plugged in to the world of social media, and its deal with Grabyo allows it to broadcast bite-sized clips on Twitter, for example, while last season's Battersea finale was streamed live on Facebook.

Targeting these digital avenues is a key part of FE's content strategy, but it's foolish for it to think it can immediately wipe out the problems that come with a small TV reach.

Formula 1's wider popularity stems from its prime slots on the BBC in the 1980s, and while it did thrust it into the public consciousness at a time when there was little competition, from small acorns do large oaks grow.

If FE is seriously targeting hitting the mainstream a wider television reach is a core part of that. 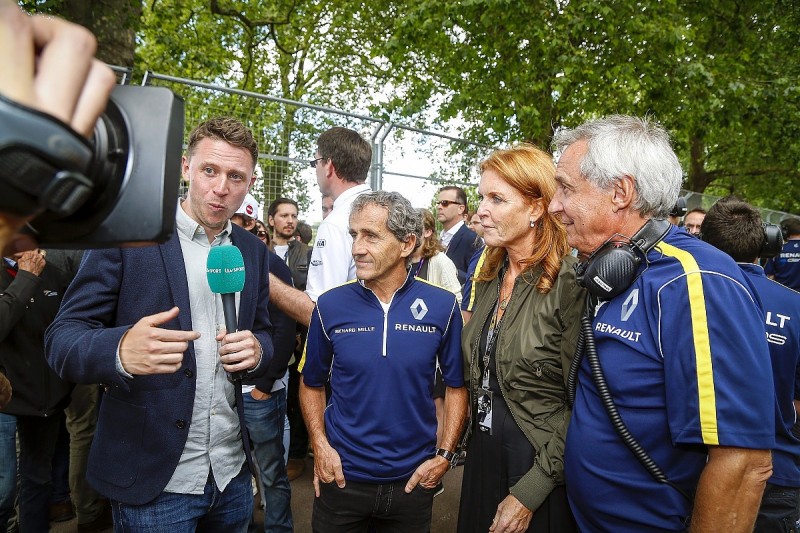 Channel 5 might not seem the most glamorous of options but it is better than the alternatives.

From the outside it appeared as though the ITV partnership was simply running its course during the 2015/16 season, as FE seemed to feature less and less in its advertising.

The numbers didn't work for ITV. It was happy for BT Sport to take up airing the Mexico City race, which clashed with ITV4's snooker coverage, for free.

Better for FE to be with a broadcaster that's going to prioritise it.

BT was the frontrunner to pick up the full 2016/17 contract, but this would have been a subscription-only service.

It might be happy with small numbers from motorsport die-hards, but joining that pack of categories fighting for airtime behind a paywall was not too appealing to FE.

There's no doubting BT invests in its motorsport content, but the blend of primetime, free-to-air coverage proved more appealing.

The bottom line is it is very good for FE to have maintained a free-to-air presence in the UK.

Attendance at the pre-season tests at Donington Park, where two of the days of the opening test were open to the public free of charge, shows there is a genuine intrigue over the series. Free tickets have helped swell its trackside numbers on race events.

While that approach doesn't guarantee getting bums on seats in front of the TV, a series that can still be described as nascent cannot afford to be difficult to find.

TV is a crucial point of entry and, if nothing else, FE's Channel 5 deal has ensured it hasn't been closed off.

Analysis: Why Jaguar was right to take a risk on Formula E drivers