Felix Rosenqvist pipped Antonio Giovinazzi to the fastest time in second Zandvoort Formula 3 European Championship qualifying, but the Swede only earned one of the two pole positions on offer

While Rosenqvist will start at the front for race two, he was unable to get anything like a clear lap thereafter and will line his Prema Powerteam Dallara-Mercedes up third for Sunday's finale.

Instead, it was Giovinazzi who topped the second-fastest laps, meaning he takes pole for the third race with his Carlin Dallara-Volkswagen.

The majority of the field, in a departure with the F3 norm, headed for new tyres halfway through the session on a Zandvoort track that is extremely grippy this weekend.

Rosenqvist instantly eclipsed Giovinazzi's earlier best, which stood as pole for race three, while the Italian had to return to the pits to fix a problem with the left-front tyre.

Once he was back on track, he set a lap just nine thousandths slower than Rosenqvist's best.

"I feel like I won the lottery!" said Rosenqvist. "For me it's just stupid - there are too many cars.

"Three times I had similar sector one and two times [to his pole lap], and then in sector three some guy completely on purpose blocks you. 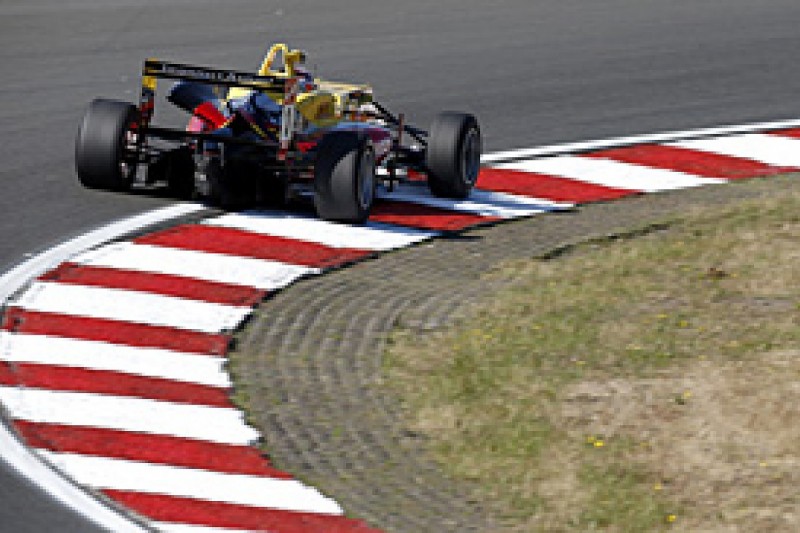 "I think we could have easily done two poles - I could have gone three tenths quicker."

While the leading duo were half a second clear of the rest, Markus Pommer continued his good weekend with third fastest for the Motopark team, while his second-best lap was good enough to give him his first European F3 front-row spot for Sunday.

Jake Dennis was another couple of tenths adrift of the German, heading Prema team-mate Lance Stroll as they took fourth and fifth respectively for races two and three.

Championship leader Charles Leclerc, who suffered earlier in first qualifying with tyres that went off after just one lap, continued a below-par outing with Van Amersfoort Racing to take sixth for race two, and is only 10th on the third-race grid.

Sergio Sette Camara provided further proof of the form of Motopark - which won the Masters of F3 here last year with Max Verstappen - by qualifying ninth, with the Brazilian improving to sixth for race three.

Maximilian Gunther took 10th on the grid for race two, but the Norisring winner could only plant his Mucke Motorsport car 14th for race three.

His top-10 spot for that race is taken by the improved Ryan Tveter, the Carlin-run American lining up ninth.