Jack Doohan took victory in the final FIA Formula 3 race of the season in Sochi, securing Trident the teams’ championship title after a tense battle with team-mate Clement Novalak.

The Australian ensued a tight battle with Novalak for his fourth win of the season – his third in a feature race – and secured the runner-up spot in the drivers’ standings.

Having finished second and third respectively in the drivers’ standings, the pair’s performance secured the Italian outfit the teams’ title, holding off Prema.

Novalak had run in second for much of the race but finished in third, with Frederik Vesti splitting the two to take second place for ART.

Logan Sargeant finished in fourth for Charouz Racing System, having started 11th, and marking a brilliant weekend for the team after his win on Friday.

Hitech’s Jak Crawford took fifth, with Johnathan Hoggard in sixth for Jenzer Motorsport, his best finish of the season.

Ayrton Simmons’ stricken Charouz car had to be pushed off the grid into the pitlane before the formation lap, leaving him at the back of the pack for the race. 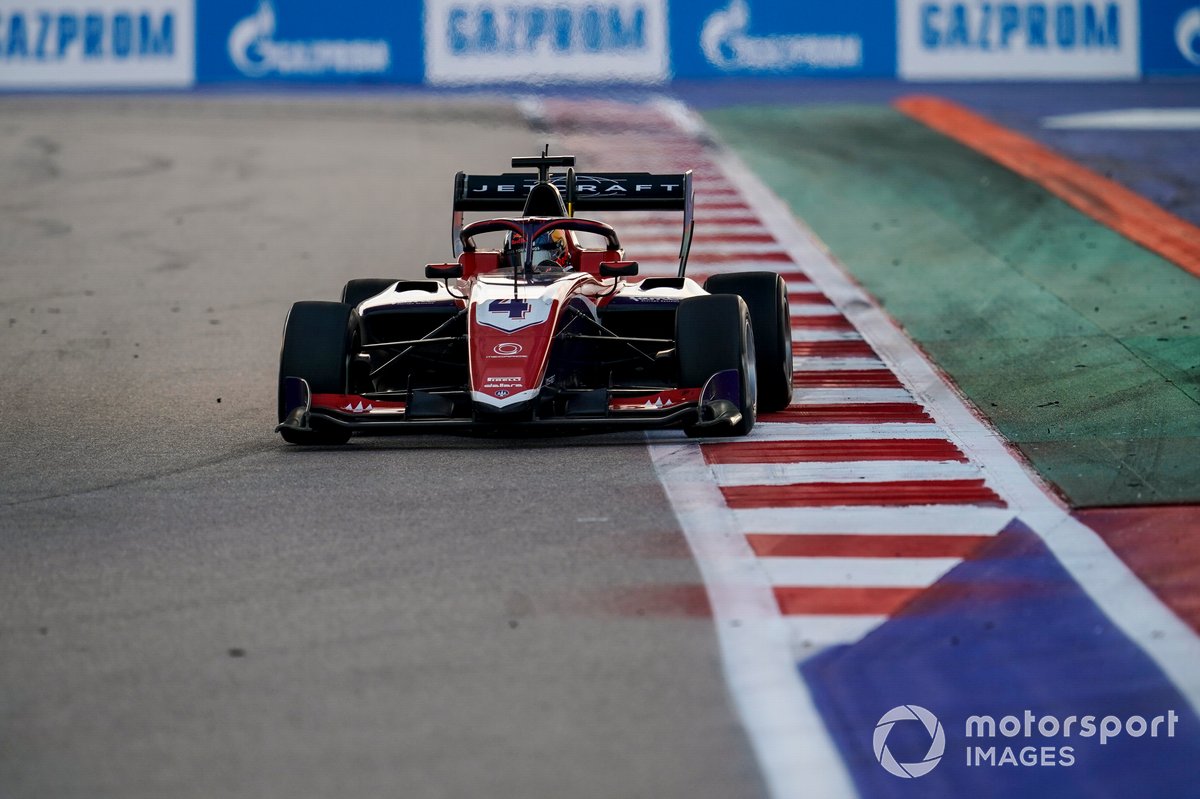 Doohan got a great start off the line, resigning Novalak to second to hold off Hoggard.

Vesti battled with Lorenzo Colombo (Campos) to regain the sixth place he lost at the start, while champion Dennis Hauger made up two places into P7, having started ninth.

The inevitable Turn 2 melee left MP Motorsport’s Caio Collet left with a damaged nose after contact with Alexander Smolyar, forcing the Brazilian to retire from the race, while the ART driver suffered damage to his floor.

By the following lap, the ART duo of Juan Manuel Correa and Vesti sat in fourth and fifth respectively, while further back the Prema pair of Arthur Leclerc and Olli Caldwell were switching spots in P14 and P15, before the latter dropped down to 18th.

Crawford passed Martins on Lap 3, but the Frenchman fought back for ninth, while Hauger fought side-by-side with Correa.

But the champion’s tussle allowed Sargeant to split the two and take sixth, before Crawford also got past and knocked Hauger back into seventh.

With 15 laps to go, Martins and Hauger battled for eighth, with the MP Motorsport driver emerging in front.

Hauger was sent spinning round on Lap 7 after being hit from the rear by HWA Racelab’s Oliver Rasmussen at Turn 7, plummeting down the order to the back of the pack and damaging Prema’s teams’ championship hopes. Rasmussen was handed a 10-second penalty for causing the collision.

Leclerc was up to P7 by the eighth lap, with the Monegasque driver passing Correa on the inside down to Turn 2.

Novalak passed Doohan at Turn 5, with his team-mate forced wide down the escape road, but had to give back the space after failing to go round the bollards. They were warned not to fight by the team shortly after.

Despite being asked to let his team-mate past, Doohan kept the lead at the halfway point, with a third-placed Vesti biding his time in third.

Hauger pitted on lap 11, taking another set of hard tyres in a bid to take the two points for fastest lap from Trident.

Two laps later, Doohan was once again asked over the radio to let Novalak past, but gave no response and held his position.

With five laps to go, Smolyar pitted for a new nose, while back on track Martins passed both Correa and Iwasa up into P8.

Vesti dropped back from the leading pair after running wide at the last turn into Lap 16, falling out of the DRS zone, while the Tridents continued their battle out front.

Racing wheel-to-wheel, the team-mates continued to trade places, with Novalak passing on the start-finish straight before the spot was recaptured by Doohan.

Increasingly desperate messages from both the team and Novalak ensued, with the Russian forced to defend from a rapidly approaching Vesti with two laps to go.

Vesti swept past Novalak down the inside of Turn 12, taking the position in the braking zone of Turn 13.

Novalak almost attempted a pass on Vesti on the last lap, but opted not to risk the team’s points and held his position.