The Carlin Dallara-Volkswagen driver was effectively gifted the early advantage when a sprinkle of rain before the start led to the decision to begin the race under the safety car, meaning poleman Norris stayed ahead at the rolling getaway.

But 2016 McLaren Autosport BRDC Award winner Norris was superb when the race finally got under way, pulling out a 1.482-second advantage on the first lap of green-flag racing ahead of fellow front-row man Callum Ilott.

That lead was extended hugely when Ilott immediately lost control of his Prema Powerteam car, flying off the road and into the gravel trap.

The safety car was scrambled again, and Jake Dennis - already up from eighth on the grid in his second Carlin car - managed to battle his way past Prema's Maximilian Gunther for second place.

The move was placed under investigation by the stewards, but Dennis was informed under the third and final safety car over the radio that the pass had been allowed.

After the final caution period there was time for seven more laps of racing, and Norris was able to pull out over two seconds on Dennis, setting fastest lap along the way. 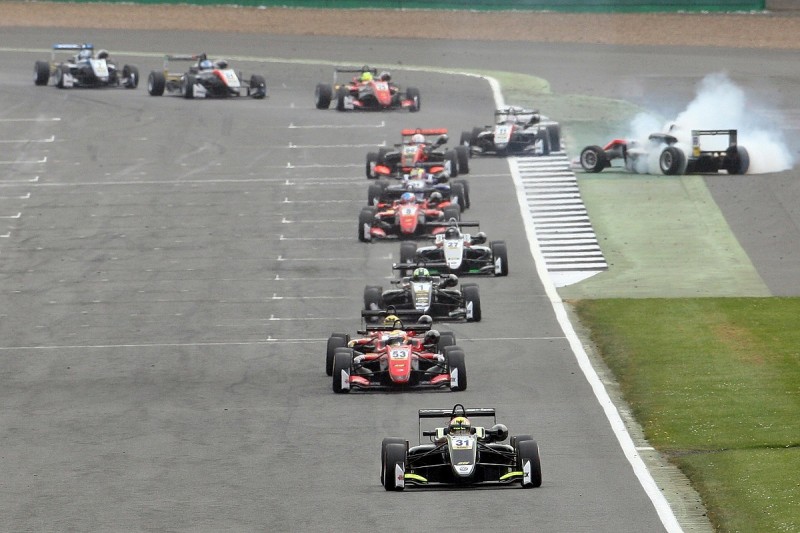 Dennis came under threat from Gunther, who got close enough to jink out of his slipstream on the run down Hangar Straight on the penultimate lap, but could not get near enough due to the loss of downforce to make a move.

"It was very difficult for the first two laps," said Norris, who backed off to cross the line 1.683s clear of Dennis.

"You could tell it was slippery because obviously a few people went off, but I'd tried to get a bit of tyre temperature behind the safety car.

"I wanted to break as big a gap as possible in the early laps and that paid off - I didn't need to take the same risks as the others."

Joel Eriksson was fourth for most of the distance, the Motopark driver getting alongside Gunther on the run to Brooklands after the final restart.

Harrison Newey, charging from 16th on the grid, was then able to pass Schumacher to take a fine sixth.

Schumacher subsequently came under massive attack from team-mate Guan Yu Zhou, with Ferrari junior Zhou grabbing seventh thanks to a superb move around the outside at Stowe that gave him the inside line for Club.