In a dramatic and typically chaotic Macau qualifying session, Red Bull Junior Ticktum rose from the lower reaches of the top 10 to put his Motopark Dallara-Volkswagen on pole in the closing stages.

Ticktum then found even more time on the final lap to set a remarkable 2m09.910s.

Ferrari protege Callum Ilott was Ticktum's main rival, and the Carlin driver had gone on to pole on his first flying lap following a late full-course yellow caused by Enaam Ahmed crashing at R Bend.

After Ticktum had supplanted him, Ilott found more time on the following lap, but was using tyres that had a couple more laps of usage, and finished the session 0.443 seconds adrift.

Both were on another quick final effort when Marino Sato crashed at Police right in front of Ilott, whose avoidance of the Japanese Motopark driver was miraculous.

Almost at the same time, Ukyo Sasahara finally lost his battle with the consistently lairy ThreeBond Racing car by crashing at R Bend.

Joel Eriksson was unable to avoid him, meaning red flags brought the session to a premature end.

"I just got a chance to put everything together, which I didn't last year," said Ticktum, who qualified eighth in 2017 before winning the Macau GP.

"It was turning into the same as last year [with all the incidents], but I tried to get the lap after the FCY.

"The [2m]10.1s [lap] was almost perfect, and the next one I managed to iron out a couple of mistakes.

"This year the track seems to be considerably better. We don't seem to use the tyres so much - you get a couple more laps than before, so you can do three or four quick ones."

Renault Formula 1 Academy driver Sacha Fenestraz made it two Carlin cars in the top three, the Frenchman making the most of following Ticktum on track to jump up the order with a late effort.

That displaced mid-session poleman Eriksson, who was on pretty elderly tyres when he set his time and, due to traffic, went no quicker when two new Yokohamas were fitted before his unfortunate crash with Sasahara. 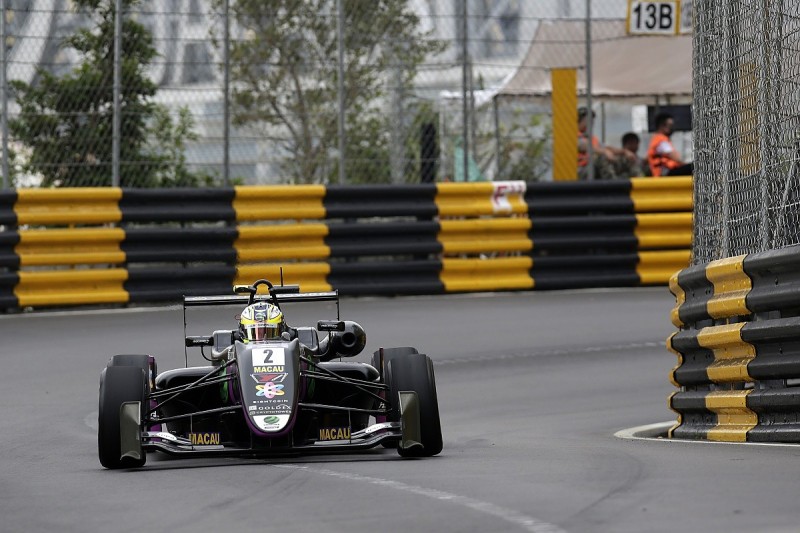 Sato put in an impressive performance before his crash to qualify seventh, and shares the fourth row with top Macau debutant Marcus Armstrong, who crashed at the Melco hairpin just over halfway through the session.

Mick Schumacher couldn't match his free practice performance and qualified ninth, and his Prema car slowed on the final lap for reasons that are not yet clear.

He lines up on row five with team-mate Ralf Aron. There were numerous other incidents.

Keyvan Andres collided with Yoshiaki Katayama under braking at Lisboa, both heading into the wall, while Sho Tsuboi almost simultaneously dropped it at the Solitude Esses, causing an early red flag.

Sophia Florsch returned to the pits after an incident on the mountain, while 'Dragon' crashed at Police moments after beating Ayrton Senna's 1983 pole time.