Hughes, who had led the race from pole position for 31 laps, was struck by Norris as they hit the brakes for Turn 1 with a few minutes of the race remaining, and spun backwards into the barrier.

Norris recovered in third position then passed Pedro Piquet for second, but a 20-second penalty for the collision dropped him out of the points to 11th.

"It all happened so quickly," Hitech GP driver Hughes told Autosport, "and I know he wouldn't have done it on purpose.

"I was on the limit on braking. We were both on the inside on the dust, but I was still confident of making the corner.

"The problem is the rear of the car is so light on the brakes that the slightest contact is enough to turn it round.

"It was just a crap way to end the race really." 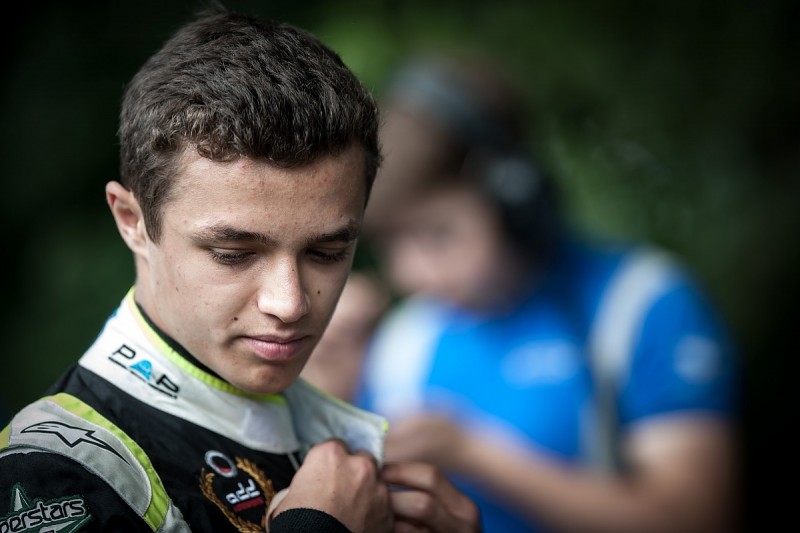 When asked whether the incident was caused because he had no grip braking on the dusty inside line and lost control, Norris said: "We both did [lost control] basically.

"I did touch him but I think it was quite obvious that he lost the rear initially as he hit the brakes.

"I locked both my front tyres and I clipped him, which made him spin even more and put him out of the race."

"They obviously made their decision quite early without going through any onboard or anything," he said.

"I don't know if they rushed it a bit, but he did lose control as he hit the brakes - that played a part."

Regarding what Norris suggested was his initial loss of control, Hughes said: "I remember we were both on the limit under braking, but I could have made the corner.

"Whether I was out of shape or not, it was the contact that sent me into the barrier.

"But it's my first race here, I led 31 laps under all that pressure without a mistake, and that's something to be proud of - but it doesn't make it any less galling!"

ERIKSSON 'COULD HAVE WON' WITH SAFETY CAR

The use of the full-course yellow for two incidents cost pre-race series leader Joel Eriksson the chance to fight for the win, the Swede claims.

He was up to sixth from the back row and closing on the leading quintet when the first FCY was called, then was the big loser at the restart.

"I could have caught the guys in front without the full-course yellow, and with a normal safety car I would have had a big chance to win," said Eriksson, who finished fourth.

"I was closing the gap to the guys in front, but both times it went green just before I turned into Turn 1."