Prema duo Piastri and Logan Sargeant were level on points heading into the season finale with ART Grand Prix's Theo Pourchaire in third place, nine points adrift of the leading pair in the drivers' championship.

Sargeant and Zendeli collided and both drivers were sent into the gravel and out of the race on the entry to the Luco left-hander, leaving Pourchaire as Piastri's only obstacle to the FIA F3 crown.

The safety car was required to recover the stricken cars and it was Piastri who dropped from seventh to 10th place while Pourchaire climbed from eighth to sixth place.

Pourchaire charged through to third place, making overtakes on his team-mates Alexander Smolyar and Fernandez as well as Ferrari junior Enzo Fittipaldi. 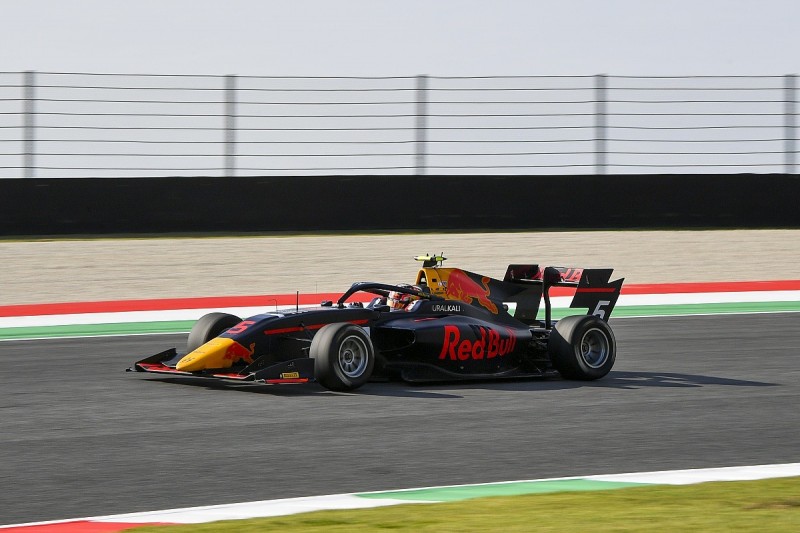 Piastri, 19, responded by overtaking the ailing Smolyar and his Prema team-mate Frederik Vesti to move into eighth place.

Pourchaire was unable to make significant progress towards second-place runner David Beckmann (Trident), who he needed to overhaul to beat Piastri on countback.

Hitech GP's Lawson dominated at the front of the field for his third race victory of the season, almost eight seconds ahead of Beckmann, who registered his sixth podium of the year.

Pourchaire was forced to settle for the final place on the podium in third place while Piastri pipped Pourchaire's team-mate Fernandez in a photo finish for seventh place.

This was enough for Piastri to seal the FIA F3 title, three points ahead of Pourchaire and four points clear of his team-mate Sargeant.

HWA Racelab's Fittipaldi earned his best result in the series in fourth place ahead of the 2019 Macau Grand Prix winner Richard Verschoor (MP Motorsport) and his HWA team-mate Jake Hughes - making his last appearance in F3 after five years.

Piastri was seventh ahead of Fernandez, Saturday's race winner Frederik Vesti and the third ART of Smolyar.