Formula 3 European champion Lance Stroll won race one of the Hockenheim series finale, but his victory is under threat due to a collision with Prema Powerteam stablemate Maximilian Gunther

Stroll got away well from pole to lead team-mates Gunther and Nick Cassidy, the last-named having jumped third qualifier Jake Hughes into Turn 1.

But the Canadian outbraked himself at Turn 2, allowing Gunther and Cassidy to draw abreast on the long run to the Spitzkehre hairpin.

Gunther emerged in front from Stroll, before Stroll forced himself into a diminishing gap at the Mercedes Arena; Gunther turned in, only to be nerfed wide and down to third position.

The stewards announced that they will investigate the manoeuvre - which in reality looked no worse than a classic touring car overtake - after the race.

Cassidy gradually dropped back from Stroll, and local hero Gunther was able to get past the New Zealander on the eighth lap with a move he started at the Spitzkehre and finished at the Mercedes Arena.

Ralf Aron passed Hughes at the Spitzkehre on the opening lap to complete a Prema 1-2-3-4, while Hughes fell back as the tightly packed field piled into the Mercedes Arena with predictable results, which culminated in Ben Barnicoat needing a pitstop for a new front wing and Callum Ilott retiring smokily to the pits after three laps.

Motopark-run Red Bull junior Sergio Sette Camara emerged from the chaos in fifth and drove a lonely race from then on. 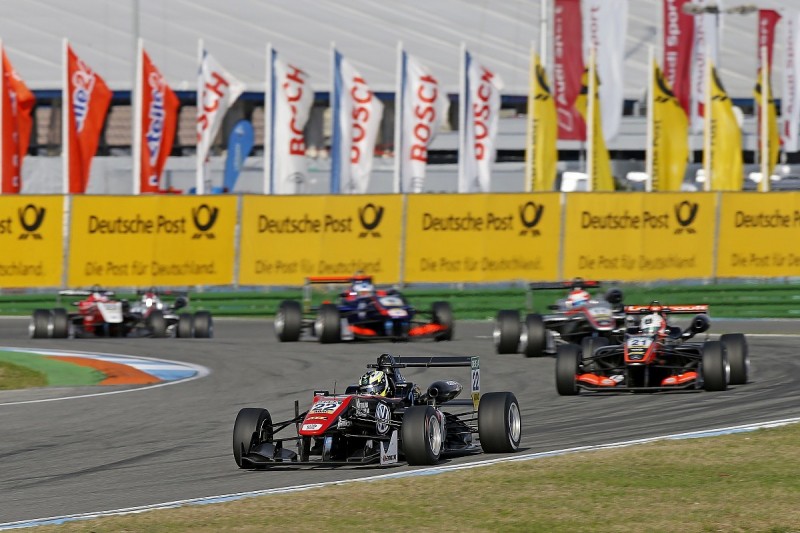 Most interest was focused on the fight for sixth, which for most of the race was between Motopark's Joel Eriksson and the Van Amersfoort Racing car of Anthoine Hubert.

The recovering Hughes, after picking off some midfield runners, joined this fight late on - he made a move on Hubert into the Spitzkehre on the final lap, only for the Frenchman to close the door, sending Hughes's Carlin car flying into a scary retirement.

Hubert was penalised five seconds after the race for incorrect positioning on the grid, dropping him from seventh to 10th.

From the back of the grid, Hitech GP man George Russell passed Nikita Mazepin as all this was going on to grab what became seventh, with guesting Hitech racer Alexander Sims ninth.

With Sims not scoring in the championship, that elevated Motopark's Ferrari protege Guan Yu Zhou to the final point.

Lando Norris retired after a clash with Pedro Piquet, after setting the fifth fastest lap, while fellow pitlane-starting debutant Dan Ticktum was 13th.