The Monegasque rookie scored his first F3 points for the Italian outfit after starting on reverse grid pole, crossing the finish line four seconds ahead of Red Bull junior Hauger, who leads the championship standings.

Prema had looked set to take a podium lock-out, with Olli Caldwell in third, before he was overtaken by MP Motorsport’s Victor Martins on the penultimate lap, taking his second consecutive podium of the weekend.

Alpine Academy driver Martins once again stormed through the field at his home round, climbing from 11th to third after finishing this morning’s race second from 10th on the grid.

Hitech Grand Prix’s Jak Crawford and MP Motorsport’s Caio Collet both stalled on the starting grid, but managed to get their cars fired up after some time.

Leclerc led into Turn 1, with Caldwell emerging behind him in the fight for second, and extended his gap to over a second by the second lap.

Elsewhere, Doohan managed to pass Hitech Grand Prix’s Ayuma Iwasa to take fourth, while Collet’s race was over after he was involved in a collision.

By the fifth lap, Doohan had joined the back of the front three in podium battle, running just a second behind third-placed Hauger, with Martins just one second behind him.

But two laps later, Martins managed to pass Doohan, while Hauger overtook Caldwell for second place, trailing 1.8 seconds behind leader Leclerc – a lead which he had increased to 2.3s by lap 10. 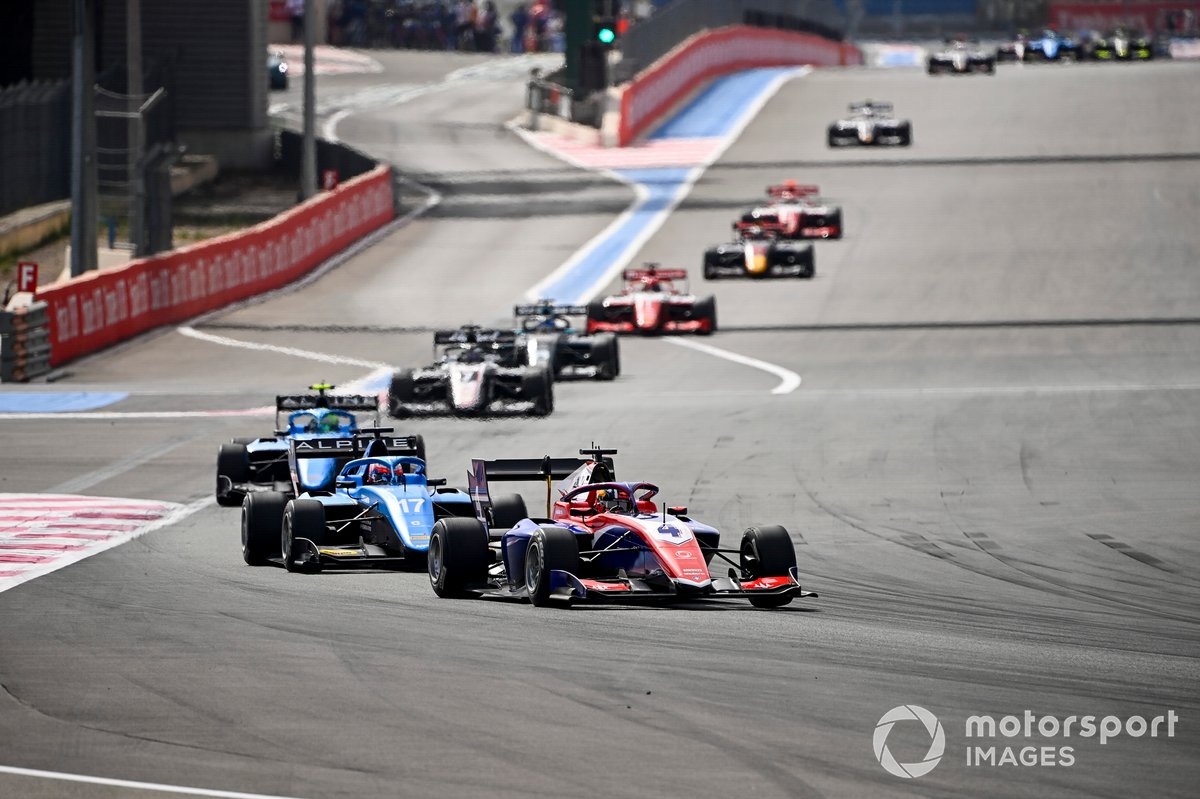 Carlin’s Ido Cohen was handed a ten-second penalty for causing a collision after he was involved in an incident with HWA Racelab’s Rafael Villagomez – his second penalty of the day after an earlier incident, which also involved Villagomez, gave him a five-second penalty. Cohen later returned to the pits and retired from the race.

Two laps from the end of the race, race one winner Alexander Smolyar (ART Grand Prix) came out best in a tussle with Iwasa and Calan Williams (Jenzer Motorsport) for seventh place. Williams also passed Iwasa for eighth on the last lap.

ART Grand Prix’s Frederik Vesti, who finished tenth, will start on pole in tomorrow’s feature race, ahead of Hauger in second.

Martins will line up third, with Doohan in fourth and Collet in fifth.