Isack Hadjar was handed victory in a dramatic first round of the FIA Formula 3 championship in Bahrain after on-the-road-winner Ollie Bearman was given a five-second penalty for track limits.

Ferrari Driver Academy member Bearman, the reigning Italian and German F4 champion, crossed the line 3.5s ahead of Hitech Grand Prix driver Hadjar after the 20-lap sprint race but was subsequently hit with a penalty that dropped him to second.

Bearman started in second place, but the Prema driver passed polesitter Zak O’Sullivan's Carlin machine on lap five before building up a lead that at one stage stood at four seconds.

But once the penalty was applied, Formula Regional European graduate Hadjar was awarded the victory and 10 points for the Red Bull junior's first race in the series.

Alexander Smolyar took the final podium spot for MP Motorsport, with the Russian driving as an Authorised Neutral Driver.

After pushing Bearman right over to the pitlane exit at the start, 2021 Aston Martin Autosport BRDC Award winner O’Sullivan pulled out an initial lead of 0.7s over Bearman, but tyre struggles saw him drop out of the podium places and finish in sixth.

Bearman and O’Sullivan had built up a healthy lead from the trailing pack by the halfway point, with Zane Maloney (Trident) two seconds behind them in third while Hadjar emerged ahead of Smolyar after a tussle for fourth at Turn 1.

Bearman snuck past Williams junior O’Sullivan into Turn 1 on lap five, taking the lead from his fellow Briton and steadily building his advantage out front.

O’Sullivan was pushed down to fourth as first Maloney, then Hadjar passed him, with Smolyar also in the mix in the podium fight and a fast-closing Arthur Leclerc fifth - the Prema driver having started 13th. 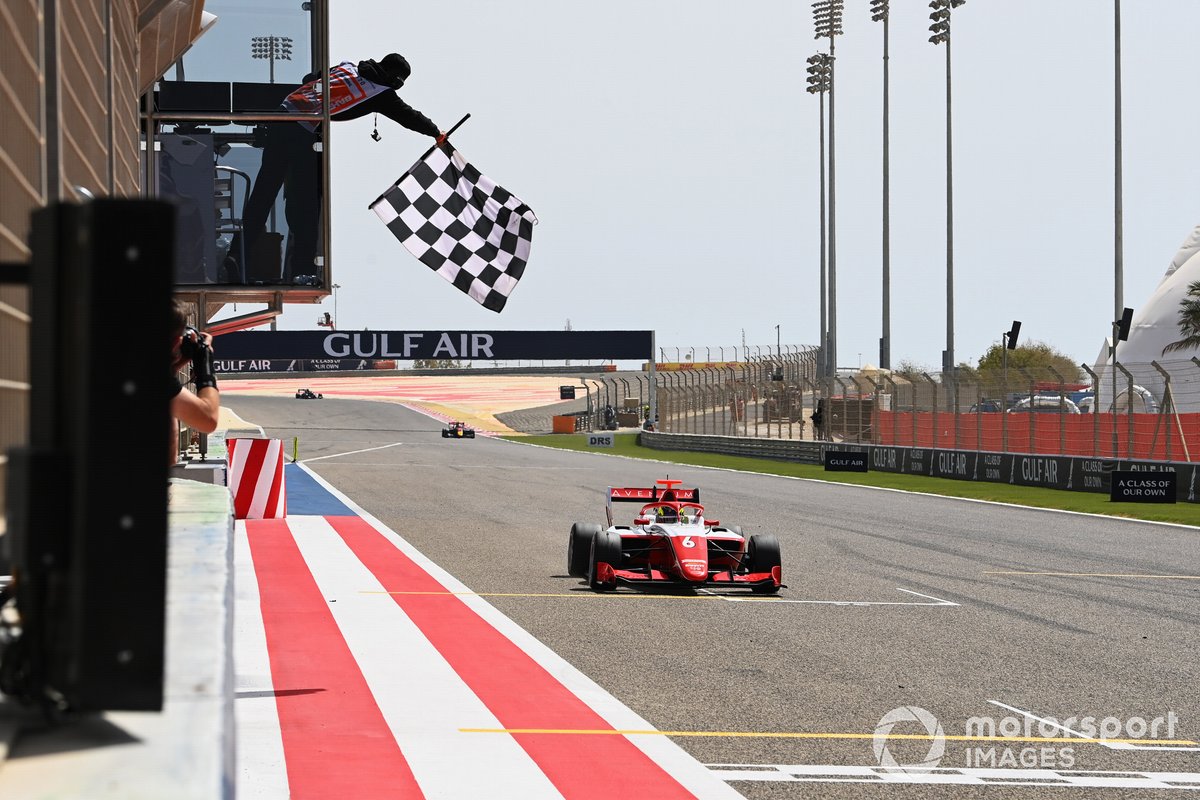 Bearman took the flag first but was denied by a penalty

Hadjar then passed Maloney into Turn 1 on lap 16, allowing him to chip away at Bearman's advantage in clear air as Maloney then came under pressure from Leclerc - who had snatched fifth from O'Sullivan with a late-braking move at Turn 14.

Leclerc dived up the inside of Maloney on the final lap into the penultimate corner but ran wide and had to cede position, before rallying again on the run to the line. Although he got a better exit, Maloney just held on.

Franco Colapinto, who starts on pole for Sunday’s feature race and started in P11 for the reverse-grid race, was forced to pit for a front wing change on lap four, leaving him to finish outside the points.

Kush Maini qualified third for tomorrow’s race but was forced to start from the pitlane for both races after missing the weighbridge. He finished in 15th position.

Roman Stanek suffered a puncture amid the first lap’s chaos, forcing the Trident driver to pit and drop to the back of the field. Jak Crawford was also forced to make an unscheduled pitstop for a new front wing, plummeting to 20th.