David Schumacher took victory in a chaotic FIA Formula 3 second sprint race in Austria on Saturday, scoring his first points in the championship.

The 19-year-old, son of former Formula 1 driver Ralf, led from lights-to-flag after penalties from the earlier race promoted him to start in pole position.

Roman Stanek, driving for Hitech Grand Prix, only managed fourth despite starting in second, with Carlin’s Jonny Edgar in fifth.

Prema Racing driver Arthur Leclerc had an astonishing race, finishing sixth after making up 21 places, having started 27th on the grid.

Johnathan Hoggard, winner of the 2019 Aston Martin Autosport BRDC Young Driver of the Year Award, finished tenth, getting his first F3 points in just his second race for Jenzer Motorsport.

MP Motorsport’s Victor Martins had been set for a podium, but tragically lost power on the penultimate lap, slowing on track and promoting Vesti into second, with Hauger into third.

Schumacher had a decent start off the line, pulling away from the pack after the first turn, with Jak Crawford of Hitech Grand Prix moving up into third place.

Contact between the MP Motorsport car of Tijmen van der Helm and Logan Sargeant (Charouz Racing System) on the second lap took them both out of the race, prompting a safety car. The collision will be investigated after the race. 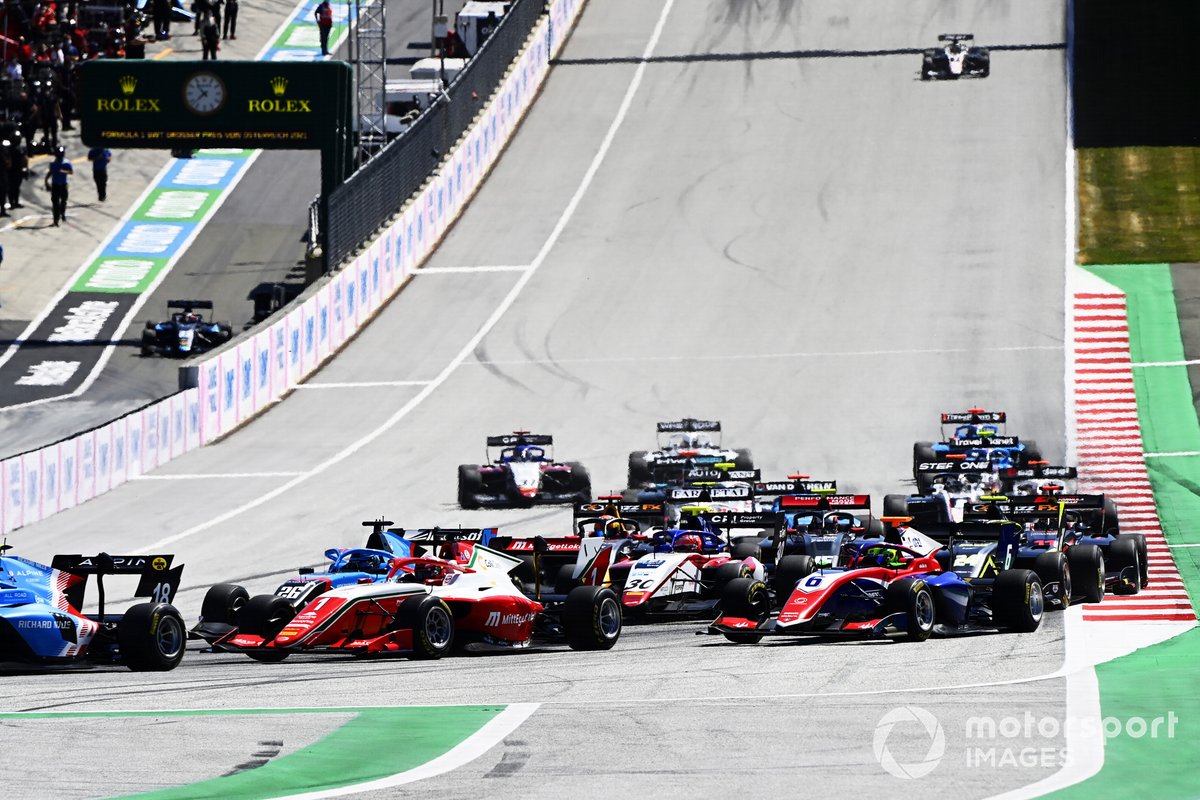 The safety car came in at the end of lap four, with Schumacher getting the jump on Stanek and Crawford into lap five, during which Vesti moved up into sixth, while further back Caio Collet (MP Motorsport) passed Dennis Hauger of Prema into 13th.

By lap seven, Crawford was rapidly approaching his team-mate Stanek, with the former nudged into the run-off area amid the close battle.

Two laps later, Crawford passed Stanek into second, but by lap 10 disaster struck, and the 16-year-old American slowed to a standstill, ending his race.

ART Grand Prix’s Juan Manuel Correa and Kaylen Frederick (Carlin) tangled as the latter was fighting Vesti for sixth, spinning in the middle of the track, and allowing MP Motorsport’s Martins to move up into third.

After a virtual safety car so Crawford’s car could be removed, the battle at the front of the field hotted up, with Stanek and Martins both tussling for second – the latter emerging victorious - while Vesti moved up to fourth after passing the Carlin of Jonny Edgar.

Within two laps Vesti had taken third from Stanek, while Schumacher continued to increase his lead – by then at over 2.5 seconds, having fallen by a second over the previous few laps.

Collet and Fittipaldi came together in the battle for eighth, forcing the former into the gravel and allowing Arthur Leclerc to swoop up into eighth, having started in 27th. Collet was later handed a five-second penalty for the collision.

Hauger moved up into fifth – up seven places from the start – as the chaos continued three laps from the end.

*Stewards handed Collet and Ido Cohen were handed five second penalties for exceeding track limits at Turns 9 and 10 four times. Collet has been demoted from 16th to 17th while Cohen has been classified in 20th spot.

*Correa was handed a 20s penalty for exceeding track limits but remains in 24th position.

*Frederick, who will miss Sunday’s race through hand injury, has been issued a three place grid drop for the next race he participates after his clash with Correa.