The Prema Powerteam-run Canadian, who started only fourth on the grid due to getting mired in traffic in qualifying, instantly made it up to second place.

Eriksson ran too deep into the Spitzkehre hairpin on the opening lap, allowing Stroll to get a run and grab the lead briefly from Motopark's BMW junior at the Mercedes Arena.

Eriksson swept back in front, before Stroll dived down the inside at Spitzkehre on lap two.

Although Eriksson drew back alongside at the exit, Stroll was able to complete the manoeuvre at the Mercedes Arena.

He instantly opened a gap of over a second, gradually extending it to finish 4.7 seconds clear and complete an end-of-season run of five wins on the trot.

Most of the attention was thereafter on Carlin cameo star Jake Hughes.

From the front row the GP3 racer made the least bad of his three starts, and came off best from a brush with Callum Ilott as they fought for third at Turn 2, which sent Ilott into a spiral towards the back of the field and eventual retirement.

Hughes then lost out after a three-wide scrap with Nick Cassidy and Sergio Sette Camara into Spitzkehre on lap two, dropping to fifth. 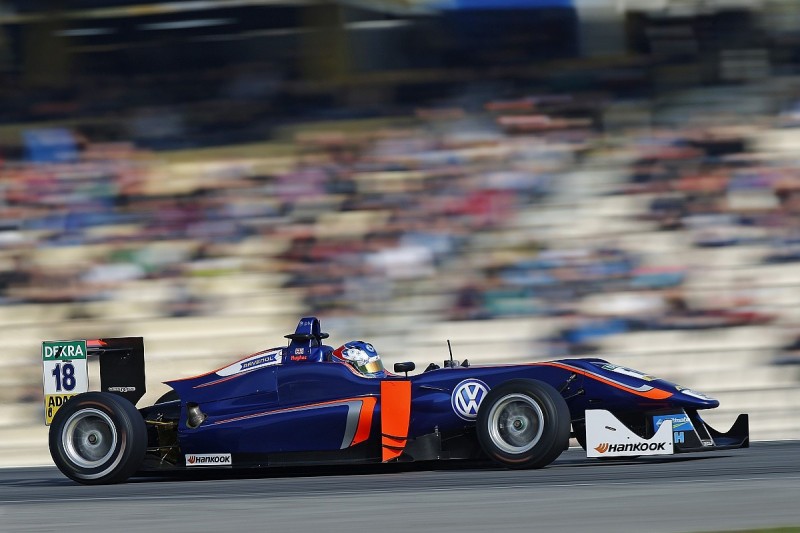 For lap after lap he swarmed over the gearbox of Red Bull junior Sette Camara's Motopark car, finally making it past at half-distance when he got the cutback exiting Spitzkehre.

The gap to Cassidy's Prema machine looked insurmountable, but Hughes set fastest lap as he gradually caught the Kiwi.

On the penultimate lap Cassidy defended the inside line at Mercedes Arena, but a slight lock-up sent him a touch wide and Hughes was through into the final podium position.

Ralf Aron lost out to Barnicoat in this fight, but finished eighth ahead of Prema team-mate Maximilian Gunther - who fought through from a problem-filled 17th on the grid - and Van Amersfoort Racing's Anthoine Hubert.

With Sims not scoring in the championship, the final point was taken by Motopark's Ferrari junior Guan Yu Zhou.

George Russell once again fought into the points from his grid penalty, only to retire to the pits.