Norris's only title rival, Maximilian Gunther, had to win the race with Norris finishing outside the top eight to take the championship battle to the second race of the weekend.

Although Gunther made some progress from his lowly grid position of 12th, he could only finish 10th.

Callum Ilott made a great getaway from pole position, while front-row starter Norris made his first duff launch since the summer, allowing third-on-the-grid Eriksson into second.

Eriksson got into Ilott's slipstream on the long blast down towards the Spitzkehre hairpin, passed him and then pulled over to claim the inside line, the pair inches from contact at high speed.

Ilott tried to retaliate at the right-hander into the Mercedes Arena, but his lost momentum allowed Norris to challenge him into the tight left-hander that follows.

There was contact between the two Brits - with Norris surviving a subsequent stewards' investigation that ruled no further action was required - which tapped Ilott wide and allowed Norris's Carlin team-mate Ferdinand Habsburg to make an opportunistic move into second place.

Norris chased Habsburg down and passed him into Spitzkehre on the seventh lap of what would be a 23-lap race.

Habsburg got the undercut on the exit, forcing Norris to hang on around the outside into the Mercedes Arena to complete the move. 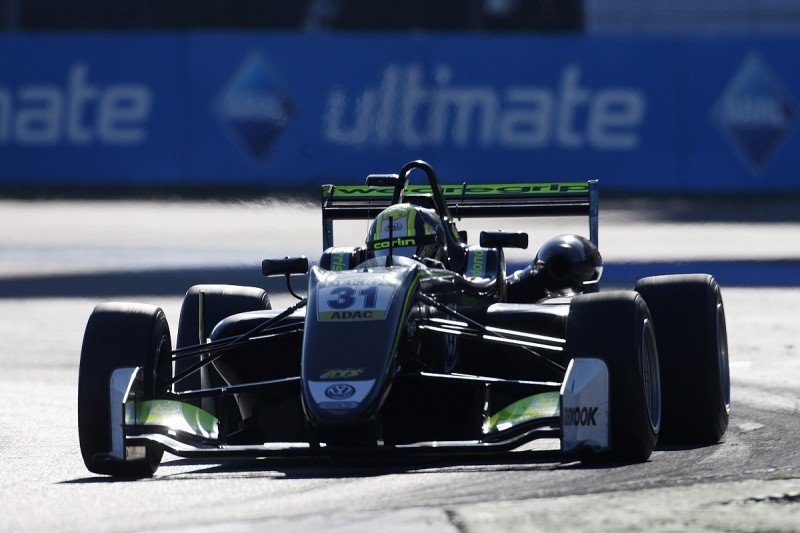 Norris then set off after the Motopark-run car of Eriksson, but for most of the race couldn't get the gap below 1.4/1.5 seconds, despite pushing hard, evidenced by frequent lock-ups into the Sachskurve.

He finally got close on the final lap, but Eriksson - who now moves ahead of Gunther into second in the standings - crossed the line 0.7s to the good.

Ilott initially fell away from the leading trio but the Prema Powerteam man was reeling in Habsburg once more when he ran wide late-on and lost a stack of time, meaning he had to fend off an attack from Carlin's Jehan Daruvala before consolidating fourth position.

Pedro Piquet ran an early sixth for Van Amersfoort Racing, under pressure from a swarm of Hitech GP cars.

Nikita Mazepin finally pierced Piquet's defence, the Russian taking sixth from the Brazilian, with Ralf Aron getting the better of team-mate Tadasuke Makino for eighth.

Gunther had closed in on this bunch but, once their battle subsided, he fell away again, holding off the sister Prema car of Mick Schumacher for the final point.