Dennis Hauger took victory in a chaotic FIA Formula 3 sprint race, moving up 11 places to take the chequered flag in a Prema 1-2 at the Red Bull Ring.

The championship leader started 12th but fought through the field to take the chequered flag, avoiding a collision on track ahead of him in a race which saw four different leaders throughout.

Team-mate Olli Caldwell finished second, with polesitter Logan Sargeant (Charouz Racing System) in third, only to be dropped to 15th place due to a post-race penalty which promoted Jack Doohan to the third place.

Matteo Nannini (HWA Racelab) and the Trident of Clement Novalak had been tussling for first position, but collided on lap 19, taking the frontrunners out of contention, while Sargeant managed to avoid the incident to take the podium.

Following the post-race penalties, Enzo Fittipaldi was promoted to fourth place ahead of MP Motorsport’s Victor Martins in fifth, with Jonny Edgar moving up to sixth.

Ido Cohen of Carlin stalled on the grid before the formation lap and was pushed back to the pitlane by marshals, continuing his bad luck after encountering issues in qualifying on Friday.

Nannini took the lead into Turn 1, with Caldwell up to third before he was overtaken by Novalak.

Martins was down to fifth off the line, with Prema’s Arthur Leclerc also losing places after a poor start, while Vesti also struggled off the line.

By the second lap, Cohen’s bad luck had continued, with his car stopping at the side of the track, prompting yellow flags before a virtual safety car.

As that ended on lap 4, Nannini had extended his lead, while Hauger had made up five places to move from 12th for seventh. 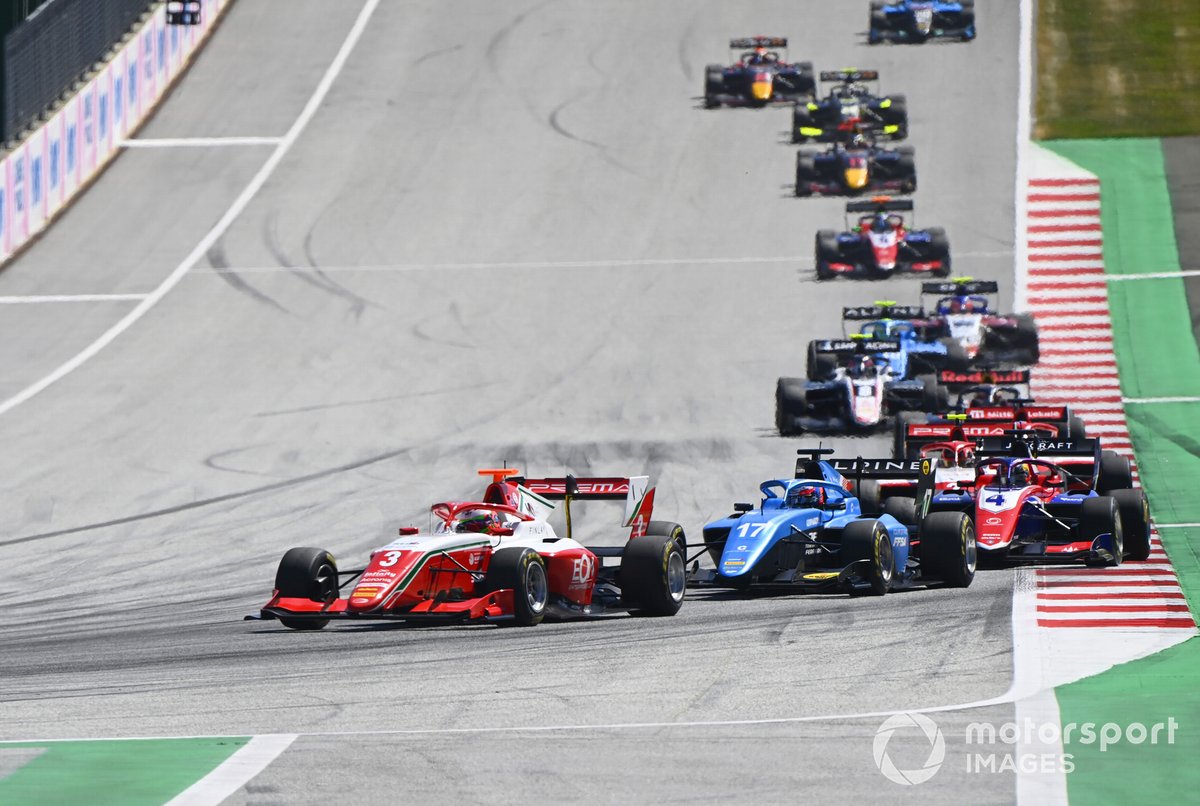 On the fifth lap, the first with DRS, Sargeant closed the gap to Nannini, while further back, David Schumacher (Trident) and Calan Williams (Jenzer Motorsport) made contact, pushing the former off the road and handing the latter a five-second penalty.

Martins made an uncharacteristic mistake on lap 6, going wide onto the gravel and losing a place to Hauger.

Sargeant finally recaptured the lead on lap 9, going deep on the brakes to pass Nannini, before the pair swapped positions again the following lap, with Novalak taking second from Sargeant and pushing him into third.

Elsewhere in the pack, Leclerc went off into the gravel, having been running in seventh, and attempted to continue but returned to the pitlane and was out of the car, ending his race.

The frontrunners continued to trade places, with Nannini and Sargeant swapping the top spot between them several times in just a few laps, amid which Sargeant was shown the black and white flags for exceeding track limits.

Hauger moved up to third ahead of Sargeant on lap 18, before Caldwell also passed the American driver, pushing him down into fifth.

Novalak took the lead on lap 19, but just two laps later was involved in a collision with Nannini, taking the two frontrunners out of the running and across the gravel.

The incident handed Hauger the lead, with Caldwell into second and Sargeant in third.