Mercedes' Stoffel Vandoorne says his move to pass BMW Andretti's Alexander Sims for the lead in Saudi Arabia that resulted in contact was "nothing too major for Formula E standards".

Vandoorne was lying in second during the middle period of the first of two races this weekend, challenging Sims for the lead while simultaneously defending from eventual race winner Sam Bird.

As Vandoorne teed up a move on Sims on the run to Turn 18, the Belgian driver went slightly deep into the corner with Sims on his outside, where the two touched.

While Bird - who had dispatched Vandoorne's team-mate Nyck de Vries earlier with a charge on attack mode - trickled past Sims, Vandoorne was able to stay ahead of Bird for the time being.

Explaining that the move to pass Sims was crucial to keeping any chances of victory alive, as he had yet to take his second round of attack mode, Vandoorne admitted to a "slight touch" between the two.

"I think the crucial part for me was to get past Sims," said Vandoorne, "as Sam was behind me in attack mode. 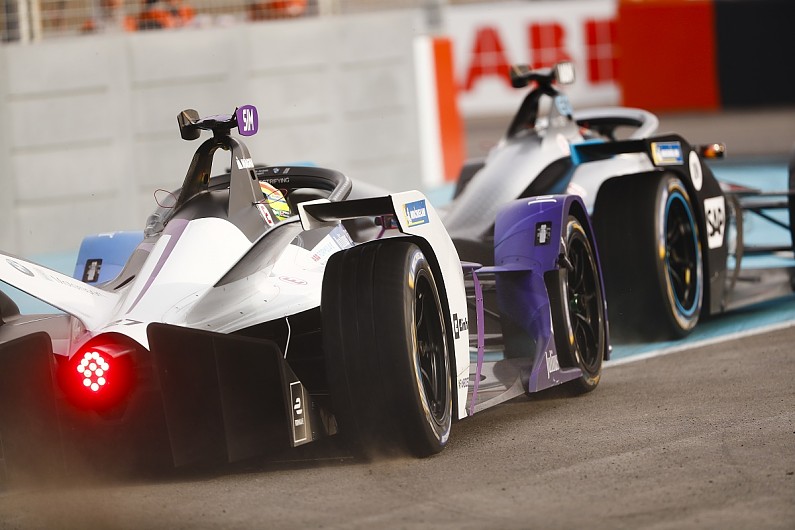 "I knew I had to clear him and try to stay in front but, then I knew it was going to be tricky to kind of keep the lead with it with Sam already having having taken the attack mode.

"I was defending from Sam and at the same time I was overtaking, so it was all quite tricky.

"The track offline here is so slippery, so I went up the inside and then I kind of understeered really, and then I think we had a little touch or something, but nothing too major for Formula E standards."

Sims agreed that Vandoorne's move was above board, and conceded that he could have defended from his aggressor's advances sooner.

"From my side, it was my fault for not blocking earlier fully.

"But in reality they probably would have just got past on the next lap or something.

"We just sort of started to get ourselves more and more into an energy deficit and about halfway through I realised that is going to be pretty difficult.

"So I got caught by the move with Sam overtaking Stoffel and me, and then effectively going down the inside of me, I was too late to react to that."

Bird went on to win the race ahead of Porsche driver Andre Lotterer and Vandoorne.