Macau rookie Verschoor had qualified third on the grid, but told Autosport that being stuck behind Callum Ilott in the qualification race robbed him of what he thought was a race winning performance.

In a dramatic start to the GP, 2019 FIA Formula 3 champion Robert Shwartzman of Prema Racing and ART Grand Prix's Christian Lundgaard went side by side behind Vips for second, but Ferrari junior Shwartzman was on the left-hand side into Mandarin and Lundgaard clipped the front right of Shwartzman's car as he took the inside.

Shwartzman slewed into the run-off at Lisboa, one of the pre-event favourites immediately removed from the action.

Verschoor made the most of the battle and dived to the inside to take second, but Vips ended the first tour 1.8 seconds ahead in a phenomenal first lap by the Hitech Grand Prix ace.

But the gap would be shortlived as a crash at Lisboa for Leo Pulcini while fighting for seventh was quickly followed a few corners later by Ferdinand Habsburg spearing into the barriers at the Esses and bringing out a safety car. He walked away unaided.

Verschoor jumped ahead of Vips at Lisboa on the restart, before a short virtual safety car.

When the action resumed, DRS was enabled and Vips attempted multiple moves into Lisboa for the last four laps but ultimately Verschoor was able to hold on for a fairytale win for the minnow MP Motorsport.

Dutch driver Verschoor - once a Red Bull junior himself - had finished only 13th in the F3 championship this year, but was phenomenal throughout the Macau weekend.

Vips was a clear second from Logan Sargeant of Carlin, the rookie perhaps lucky to escape a penalty for his role in a Turn 1 pile-up at Lisboa in the qualifying race.

Sargeant was racey in the GP and fought past a number of strong challengers in his first visit to Macau. 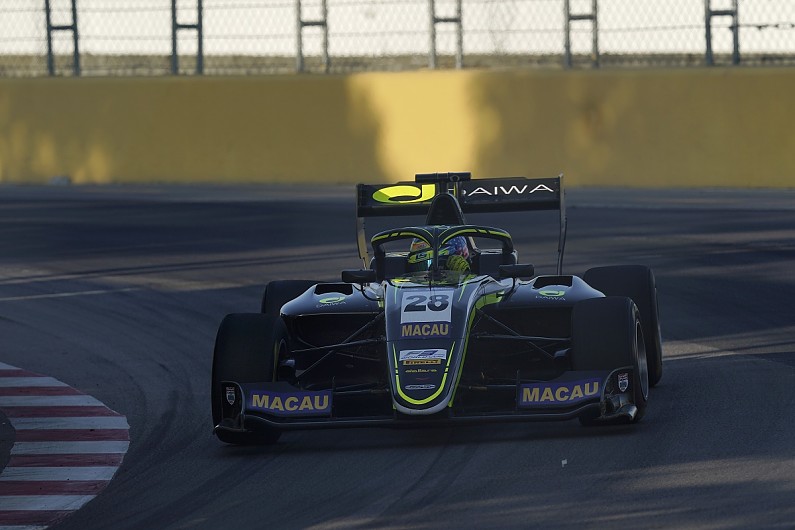 Renault junior Lundgaard wasn't able to rebuff Sargeant but did hold Alessio Lorandi at bay - the Italian back from a year out for a torn tendon in his thumb and impressing despite his lack of match fitness.

Ferrari junior Ilott followed Lorandi home and was another driver with little or no experience of the new F3 car, the Briton having competed in F2 this season and missed his simulator session before the weekend due to cancelled flights.

Ilott came under pressure from one of the stars of the race, Red Bull's Liam Lawson - but the Kiwi was just held at bay as Ilott secured sixth.

Verschoor's MP team-mate Lawson started 20th, but the team - which is run on a shoestring budget - provided a rocketship for its two lead drivers to work forward and with a number of opportunistic moves, he took seventh.

Marcus Armstrong scythed through the field for FIA F3 teams' champion Prema Racing, the Ferrari junior having started 17th after being caught in a qualifying race pile-up.

David Beckmann was the top Trident driver in ninth although he slipped back through the race, and the other remaining Prema entry of Fredrik Vesti completed the top 10.

On her return after a shocking airborne crash last year, Sophia Florsch retired when her car shut down just before Mandarin - which brought out the VSC.

Double Macau winner Dan Ticktum pulled off an impressive recovery drive, coming from the back of the grid to 13th. Ticktum had been caught up in the first-lap qualification race crash, which prevented him from fighting for a hat-trick of wins on his first outing with Carlin at the race.

His fellow Brit and pre-event favourite Jake Hughes was caught in the same crash and also came from the back in the GP, driving through to 17th.