The DRS system being used for the first time in Macau was switched off during Saturday's F3 World Cup qualification race after a sensor failure impeded its usage, Autosport understands.

The new F3 car is being driven at the Guia circuit for the first time this weekend and, unlike the Dallara F317 used before it, features the moveable rear wing flap pioneered in Formula 1.

A select number of drivers were able to use the device but, when it became apparent that a sensor had failed, it was deactivated.

It is not clear if the problem will be rectified in time for the Grand Prix on Sunday, and Autosport has contacted the FIA for comment.

Although the DRS activation systems are usually set up and monitored by Formula 1 staff during race weekends, F3's presence as a standalone single-seater category means different systems are required. 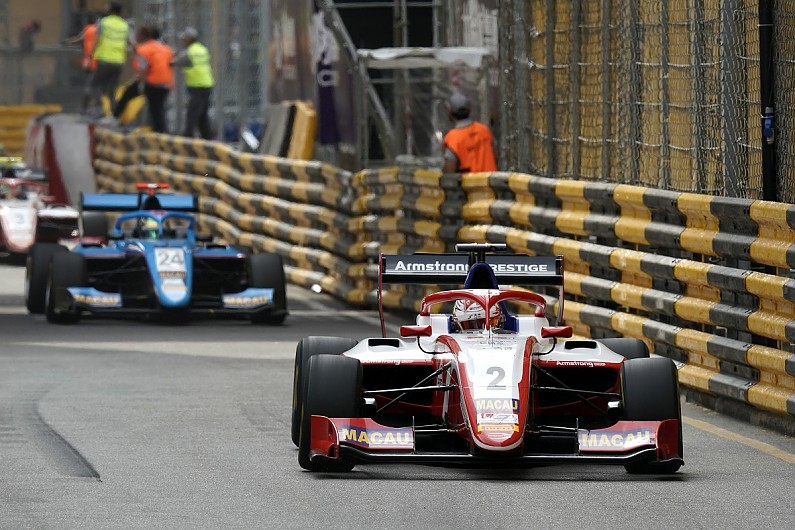 After using DRS for the first time on the Guia circuit, double Macau winner Dan Ticktum said that he believes the effect of the device will be significant in the race.

"In the races if you're anywhere near the second, you're getting passed or you are passing," he said.

"If someone is catching you, you'll have to be absolutely balls out through the mountain to make sure they aren't within a second.

"Because as soon as they are within a second, they will be coming past. Simple as that.

"It's going to be difficult to defend."

This year, the F3 cars have achieved speeds 185mph during qualifying, 13mph quicker than last year.

The DRS issues on Saturday are not believed to be related to a technical bulletin issued by the FIA on Thursday.

The update confirmed that the shim - which affects how wide the DRS can open and looks like a small washer - in the rear wing assembly should not be thicker than 0.5mm for "safety reasons".

Qualification race polesitter and winner Juri Vips had previously experienced a problem with DRS on Thursday when his device stuck open in the first free practice session.