The lap times had tumbled throughout the weekend - thanks to the introduction of the new FIA Formula 3 car - culminating in Vips setting a 2m06.569s in free practice two on Friday morning, 3.341s quicker than last year's pole and comfortably the fastest ever F3 laps around Macau.

The pace was hot immediately in qualifying, and Prema Racing's Marcus Armstrong became the first driver to dip under the 2m06s barrier in the second half of the session.

But on his next flying lap the Ferrari protege ploughed into the barrier at the outside of Police, following a session best second sector.

That caused the second red flag, after near-simultaneous early crashes from Leo Pulcini and Enzo Fittipaldi at the same place Armstrong shunted.

A 19-minute shootout for pole followed the Armstrong crash, and Vips came to the fore - pumping in a 2m04.997s with seven minutes to go and putting himself seven tenths clear of anyone else at that point.

Armstrong's team-mate, fellow Ferrari junior and the FIA Formula 3 champion Robert Shwartzman, was in the top three for most of the session and his late improvement looked enough to worry the pit-bound Vips. But it wasn't to be as the Russian fell 0.379s short.

Callum Ilott, another Ferrari protege, hadn't even driven the FIA F3 car in a sim prior to the event, but the Sauber Junior Team driver stepping down from his regular Formula 2 seat for his fifth Macau starred with third.

Renault junior Christian Lundgaard looked a sullen figure before final qualifying as he and ART Grand Prix chased a suitable set-up, but the rookie leapt forward mid-session. Fourth place made him the best of the four Macau first-timers in the top 10.

Macau veteran Jake Hughes put event debutant HWA into the top six with a late lunge after spending most of the session outside of the top 15. 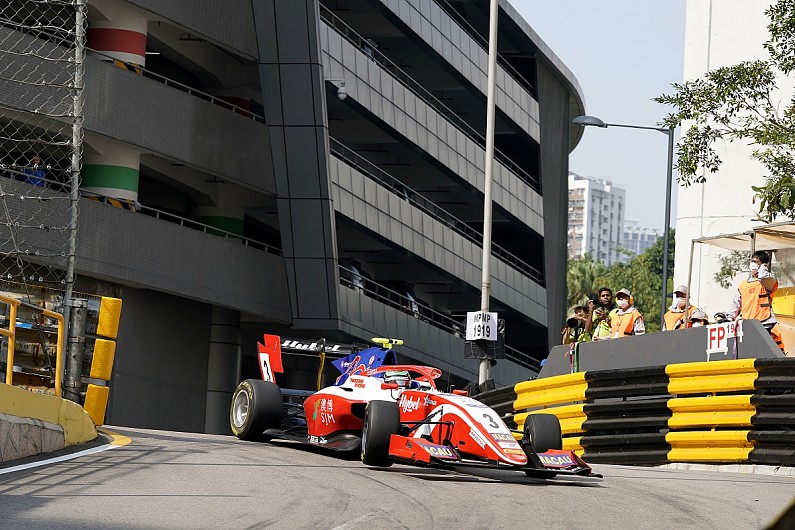 Arjun Maini was another third-tier returnee who didn't get into the sim before the event, but followed up the impressive performances Yuki Tsunoda has produced for Jenzer Motorsport in the FIA F3 season by putting the team eighth.

Armstrong slipped to ninth in the order after his crash, while Macau first-timer Logan Sargeant was the top Carlin driver amid drama for his double Macau winner team-mate Dan Ticktum.

The Briton hit an already stationary David Beckmann at Police in practice two, despite a huge snap of oversteer in an attempt to avoid the stricken Trident driver.

A herculean effort from the Carlin squad ensued as the team swapped the engine and gearbox, rear wing, floor and other bodywork in fewer than four hours.

Ticktum managed 13th, despite having only 20 minutes of running.