It was a frenetic race from the off after 15 drivers were penalised for driving unnecessarily slowly during qualifying.

Reigning German Formula 4 champion Lirim Zendeli claimed the lead from the start, but he was clipped in the rear by polesitter Christian Lundgaard on lap three of 22.

Lundgaard had to pit with a broken wing and raced back to 15th, while Zendeli was unable to return to the pits and retired.

That allowed seventh-place starter Armstrong to work his way into the lead after some aggressive overtaking moves.

With six laps to go, Shwartzman attacked Armstrong and made his move to take the lead.

The last time the pair battled wheel-to-wheel for the lead was at the Red Bull Ring, where they made contact and Shwartzman took third after a penalty as Armstrong dropped to 19th.

But this time the battle was clean, if not short-lived, as Peroni's crash brought out the safety car on lap 19 of 22.

Peroni, pictured below, hit a kerb at the exit of the Parabolica and was launched into an enormous airborne pirouette, landing upside down on the barriers. 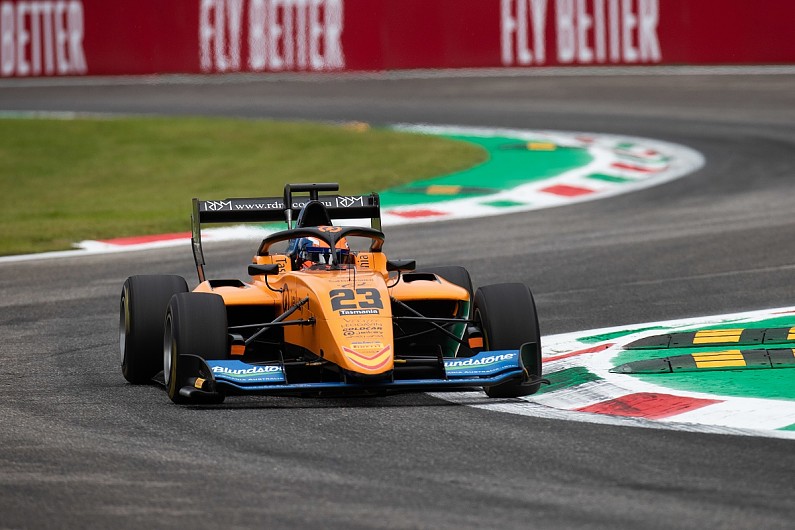 He walked to the medical car unaided, despite the enormous accident and has since been taken to hospital for precautionary checks.

Jehan Daruvala, who didn't have use of DRS during the race, made it a 1-2-3 for teams' champions Prema Racing at its home race.

Shwartzman now holds a 35-point lead in the drivers' championship over Daruvala with three races remaining, after taking his third win of the season and his first since Paul Ricard.

Ever-impressive Red Bull and Honda junior Yuki Tsunoda recovered from going straight on at the Variante della Roggia chicane on lap one to take fourth for Jenzer Motorsport.

Tsunoda was ahead of third-place starter Richard Verschoor, who appeared to be struggling for top speed in his MP Motorsport car.

Trident's Pedro Piquet took sixth, and Jake Hughes drove from 18th to seventh and was promoted one place by Peroni's crash.

It was another nightmare weekend for Red Bull junior Juri Vips, who qualified way down the order and could not avoid HWA driver Keyvan Andres under braking for the Variante della Roggia chicane.

Vips hit Andres in the rear right at speed, breaking Vips' front left wheel loose from his car and causing the safety car in the first half of the race.

Armstrong was penalised after the race.

An F3 statement read: "The stewards found that during the first safety car period, the Prema driver exceeded the minimum delta time.

"The Kiwi has been handed a 20-second time penalty, which drops him from second to 21st."

The penalty for Armstrong meanss each driver from third to 20th was promoted one position.

Carlin's Felipe Drugivich received the same penalty as Armstrong, and dropped from 11th to 16th.