British racer Alex Lynn stormed to victory in the qualification race for the Macau Grand Prix.

Lynn twice had to pass Felix Rosenqvist in a race that was thrilling in the opening laps, before pulling out an advantage of more than two seconds.

Poleman Raffaele Marciello bogged down at the start and had dropped to fifth by Lisboa.

A lightning getaway from Rosenqvist gave the Swede the lead, but Lynn tucked into his slipstream and pulled a brave move around the outside of the Mandarin Oriental kink.

As Rosenqvist in turn got the slipstream down to Lisboa, Lynn was forced to dive in deep on the brakes and ran wide, just keeping the car out of the barriers and conceding the lead to the Swede.

A safety car - caused by a startline crash when Tom Blomqvist stalled and was hit by Harry Tincknell - eradicated Rosenqvist's advantage.

This time Lynn judged things to perfection, pulling to the outside of Rosenqvist on the run into the Lisboa right-hander and turning in with the lead.

"I think the main positive is that the car felt really nice," said Lynn of his Prema Powerteam Dallara-Mercedes, which is backed by the Theodore Racing initiative of Teddy Yip Jr, son of the late Macau GP godfather Teddy Yip Sr.

"I made a pretty good start and the restart was good. In terms of the qualification race it was nice, but the grand prix on Sunday is another thing."

Lucas Auer ran third initially in the sister Prema/Theodore car, but at the restart he was passed into Mandarin Oriental by Antonio Felix da Costa, and then at Lisboa by Marciello.

Auer then ran into the barriers at San Francisco Bend, forcing him out of the race.

Marciello's Prema machine chased down the Carlin Dallara-Volkswagen of da Costa, passing the Portuguese on the fifth lap. He then closed on Rosenqvist's Mucke Motorsport Dallara-Merc. 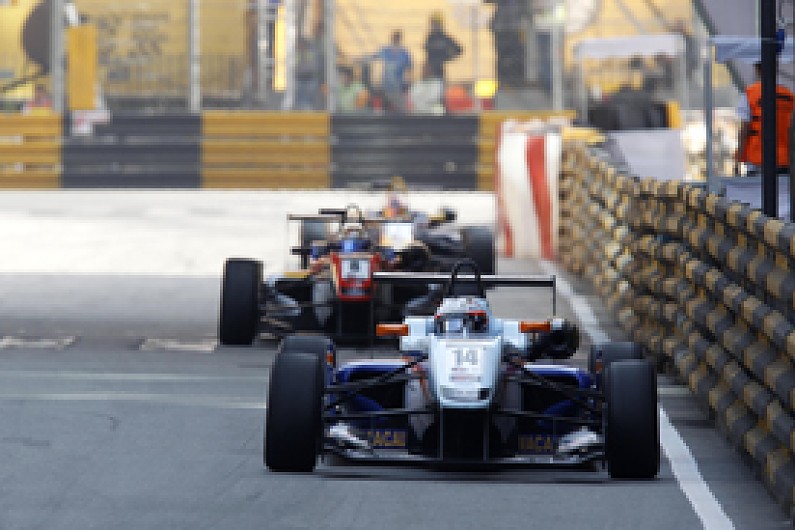 Rosenqvist was struggling for grip after the safety car, but in the late stages the balance came back and he set fastest lap as he pulled away to take second.

Pipo Derani was not too far behind the leading quartet to uphold honour for the Fortec Motorsport squad, hit by the Blomqvist disappointment, with fifth.

Alexander Sims (T-Sport Dallara-Nissan) just held off Carlin-run Macau rookie Jordan King in the fight for sixth, with the Fortec car of Will Buller just behind.

Meanwhile, Carlos Sainz Jr and Esteban Ocon completed the top 10 after both passed Stefano Coletti. Frenchman Ocon, in his first start in a current F3 car, set a fastest lap just a tenth of a second slower than Prema team-mate Lynn's.

The other retirements were Dennis van de Laar - who also failed to get going at the start - Ed Jones, who crashed at Fisherman's Bend, and Kevin Korjus, who ground to a smoky halt with one lap remaining.