Dan Ticktum has been stripped of his Formula 2 sprint race victory at Monza after DAMS failed to provide a sufficient fuel sample from his car.

Williams Formula 1 junior driver Ticktum scored his second win of the 2020 F2 season in dominant fashion at Monza on Sunday.

After taking the lead at Turn 1 on the opening lap from second on the grid, the British driver went unchallenged through the remainder of the race as he crossed the line four seconds clear of UNI-Virtuosi's Callum Ilott.

But a stewards' investigation after the race revealed it had not been possible to take the required fuel sample from Ticktum's car, which stopped on the in-lap at Curva Grande.

"Having considered the matter extensively, the stewards determined that it was not possible to take a fuel sample of 0.8 kg from Car 2 after Race 2," a bulletin from the FIA stewards at Monza read.

"The technical delegate's report stated that sample extracted was 0.05 kg.

"This is a breach of the technical regulations and Car 2 is therefore disqualified."

The decision means that Ferrari Driver Academy member Ilott inherits the race win at Monza, marking his third victory of the season. 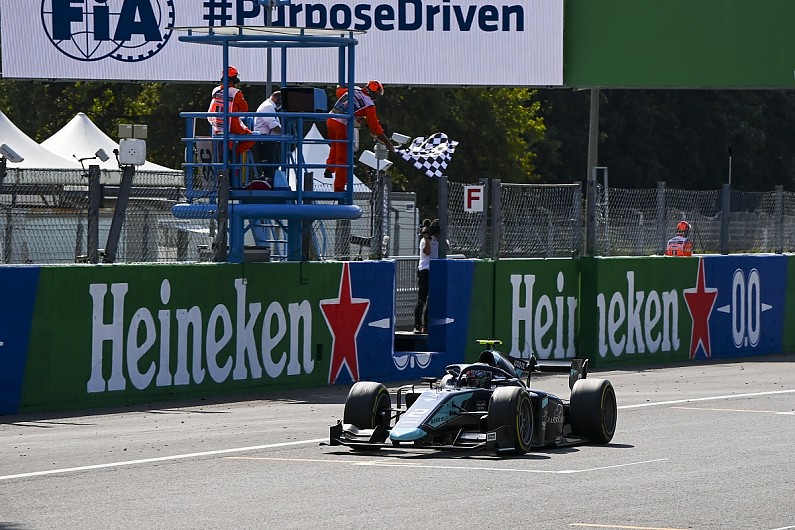 The result also extends Ilott's lead in the drivers' championship to six points ahead of Prema Racing's Mick Schumacher, with Robert Shwartzman sitting a further three points behind with four rounds to go.

Ilott's UNI-Virtuosi team-mate Guanyu Zhou also moves up into the points as a result of Ticktum's disqualification, claiming the final point in eighth place.

The victory marks a vast turnaround in Ilott's fortunes after a pitstop stall on Saturday in the feature race while leading cost him a potential victory.

Ilott said it had been "almost a solid weekend, without yesterday, but these things happen."

He added: "It's good to be back into the lead, and we'll see what we can do. We had really strong pace yesterday. It was another missed opportunity this year, but I don't know what to say really, other than that.

"It was a great race, and it's a shame. It's always spectacular, but it never really goes completely my way in the end."